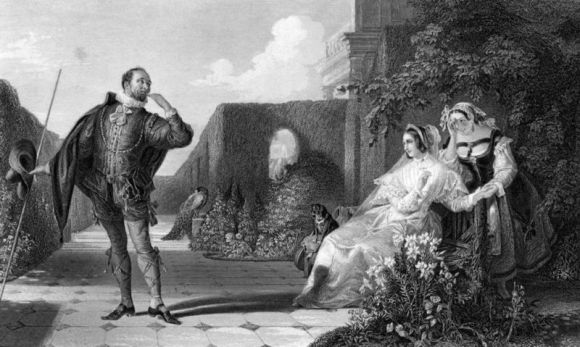 William Shakespeare‘s unique use of language (or misuse, depending on whom you ask) activates a response in the brain that can “shift mental pathways and open possibilities” for further mental stimulation. In other words, reading Shakespeare increases your brain power. If someone had told me this in high school, I would have never reached for those Cliff’s Notes.

Professor Philip Davis of the University of Liverpool’s School of English has been studying “functional shifts” in the brain while it is interpreting the language of Shakespeare. Something Shakespeare did in his writing was misuse words as well as create new ones (1,700 at one count) — adding prefixes and suffixes, combining words, changing their functions, etc. (Big Think actually compares him to Snoop Dogg, which actually makes a lot of sense in this context, fo’ shizzle.)

Here are some examples:

An adjective is made into a verb: ‘thick my blood’ (The Winter’s Tale)

A pronoun is made into a noun: ‘the cruellest she alive’ (Twelfth Night)

A noun is made into a verb: ‘He childed as I fathered’ (King Lear)

What happens to the brain when it sees these new words is that rather than being confused, it becomes excited — and gets hungry for more.

One type of measured brain responses is called an M400, which occurs 400 milliseconds after the brain experiences a thought or perception. This is considered a normal response. On the other hand, a P600 response indicates a peak in brain activity 600 milliseconds after the brain experiences a quite different type of thought or perception. Davis describes the P600 response as the “Wow Effect,” in which the brain is excited, and is put in “a state of hesitating consciousness.”

And in that moment of hesitation, the brain is working a bit of overtime figuring out what those previously unseen words mean. As we know, a lack of stimulation in the brain is said to lead to dementia and other memory problems in old age. But Davis believes that reading the language of Shakespeare provides such stimulation, preventing a “deadening” of the brain that occurs when language is bland and predictable. He hopes to incorporate what he’s discovered into treatment for depression and dementia.

Here is the experiment from Big Think:

Short of placing multiple electrodes on your scalp, simply read the four sentences below, and ask yourself which one you like best.

1. A father and a gracious aged man: him have you enraged

2. A father and a gracious aged man: him have you charcoaled.

3. A father and a gracious aged man: him have you poured.

4. A father and a gracious aged man: him have you madded.

If the experiment worked, here are how the results should have played out: The first sentence should elicit a normal brain reaction. The brain recognizes that the sentence makes sense; unlike the next two lines, which the brain rejects. The fourth line is an example of functional shift, which is found in King Lear. Your brain is now thinking like Shakespeare.

This is all fascinating, but does this mean that Sarah Palin was onto something? (And that she’s the political lady version of Snoop Dogg??)