What is "No more of this bullshit on national television?" 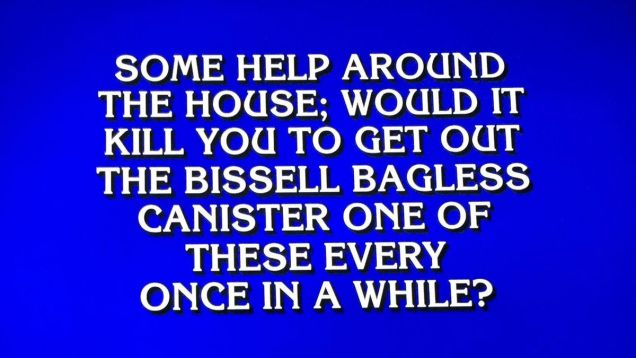 Alex, I’ll take “Disgusting Gender Stereotypes That Are Damaging As A Part Of A Larger Misogynist Culture for $500,” thanks.

On last night’s Jeopardy, the show featured a category apparently written by someone who is either a time traveller from the mid-twentieth century; watching far too much Family Guy; or just generally a raging sexist jerkhole. Here’s a video of the entire category, during which we learn that Jeopardy thinks women really, really love vacuum cleaners, Sleepytime tea, pilates, crossword puzzles, and Levi’s. How original and totally not offensive!

Naturally, the Twittersphere immediately jumped on Jeopardy’s crazy-offensive category, letting the their writers know that what women really want are things like equal pay, reproductive rights, and an end to rape culture. But hey, what do we know, am I right ladies? Where’s my Sleepytime tea? It’s the only thing that will calm my obviously PMS-induced rage!

Despite the fact that the average Jeopardy viewer is sixty-four and might not see anything wrong with threatening to send Alice boom, to the moon!, it’s disheartening to see damaging stereotypes like this in 2014. Did no one look at that category and think, hmm, this might not be the best idea?

As Mashable points out, a woman—Elisa Korn—ended up winning the evening and taking home $26,400. How she ended up winning Jeopardy while busy preoccupied by thoughts of housecleaning and shopping is a mystery for the ages.