Reviewers for The Orville Are Confused | The Mary Sue

Reviews for Seth MacFarlane’s The Orville Are In, and They Are…Not Good 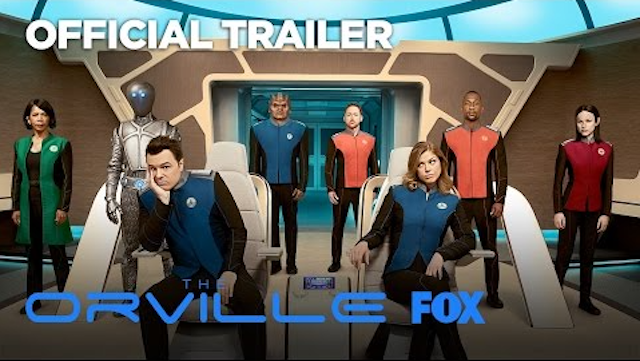 Seth MacFarlane’s Star Trek-inspired show, The Orville, debuts on Fox this Sunday, and early reviews for the first three episodes are out. While the show was marketed as a Star Trek spoof, suggesting the possibility of something that might be (if MacFarlane could avoid his usual sexism/racism/homophobia) enjoyably Galaxy Quest-esque, it turns out it’s tonally much weirder than that.

The show strangely combines MacFarlane’s glib humor with attempts at an earnest, optimistic sci-fi show – and that, perhaps unsurprisingly, doesn’t seem to work.

“It’s the sort of show that might sound sustainable as a half-hour comedy…But the most shocking fact about The Orville for most people is that it’s an hour long, and fundamentally uninterested in being a comedy. So many Orville scenes just die in the moment, because MacFarlane’s comedy instincts as a writer (he wrote the pilot, at the least) means that he can’t avoid writing in jokes. But this show does genuinely want to be a sci-fi adventure, so the comedy is either played completely deadpan, or not played at all. After watching the actual show, its intentions became clear: Seth wanted to cosplay being captain of the U.S.S. Enterprise. And Fox let him do it.”

“Best known for the defiantly crude animated shows Family Guy and American Dad! as well as the tonally similar Ted, A Million Ways to Die in the West and, most divisively, a 2013 stint hosting the Oscars, MacFarlane isn’t an obvious choice for an hourlong, series-length homage to Star Trek, something obviously close to his heart. That inability to balance his rapid-fire comic wheelhouse with the demands of dramatic storytelling keeps The Orville earthbound.”

“But more problematic are tonal shifts that come with filling an hour with the sort of drama that should support an orchestrally scored Star Trek homage while also accommodating MacFarlane’s typically skewed, bro-friendly search for laughs.”

“There’s an inescapable feeling that MacFarlane couldn’t decide if his show is a spoof or an homage. It unsuccessfully tries to straddle both lines.”

“The Orville is not, as it turns out, the Galaxy Quest-style spoof Fox has been selling in its ads. In fact, The Orville isn’t particularly funny at all, both by design and accidental ineptitude. Instead, it’s a bizarrely straight-up homage to Star Trek that can’t seem to admit as much.”

“There’s no doubt that The Orville would be better off as a half-hour comedy, if only because it becomes clear halfway through the first episode that MacFarlane has no idea how to fill out a full 40 minutes of broadcast television. Scenes drag on for minutes beyond their natural endings, and by the third episode, different combinations of characters just start having the literal same conversation twice.”

“For some reason, the show is being promoted as some type of Star Trek spoof, but it has no such aspirations. If you find yourself watching The Orville, you will be watching mediocre Star Trek fanfiction infused with bad jokes.”

“Because the show is an hour long and not MacFarlane’s usual comedic half-hour format, the jokes land in the middle of scenes and don’t go anywhere. The show isn’t a comedy so the jokes don’t build; they just exist in a vacuum (maybe it’s a metaphor for space). But the show isn’t a proper drama either, because none of the stakes are particularly high.”

“There’s not much that’s particularly optimistic about The Orville either. It relies on hoary stereotypes like the hard-working husband and the nagging wife, placing them in a sci-fi context.”

“The Orville can’t be all kinds of shows yet, because it’s uncertain what type of show The Orville is at its core. It’s as amorphous as the sentient green glob who’s slithering through the ship’s corridors and speaking in the voice of Norm Macdonald.”

“The Orville is to Star Trek: The Next Generation what Family Guy is to The Simpsons and A Million Ways To Die In The West was to Blazing Saddles: Not the genuine article, and not even an incredible simulation, but something with the same look and some of the same feel but with a distinctly different soul. For all its bracing earnestness, the humorous side of The Orville, the side that halts conversations to comment on the action, comes across like taking the piss. Solemnity and humor aren’t mutually exclusive properties on a show like this, but it’s a delicate balance. The Orville is neither delicate, nor balanced, and it’s creator’s track record suggests it probably won’t ever be.”

(Featured image via screengrab of FOX’s The Orville ad)