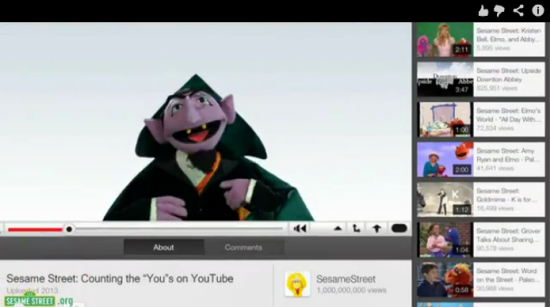 A few weeks ago I told you about Sesame Street’s goal of hitting one billion views on YouTube to put them in the same pantheon as the likes of PSY’s “Gangnam Style,” Lady Gaga, and Justin Bieber. As of Valentine’s Day they were about 22 million views shy of their goal, so Telly pleaded for more views, promising a great “Top Secret” video when the goal was reached. Well guess what just happened. Check out this new Sesame Street video with The Count counting to one billion.

The video features a new song and loads of Sesame Street viewers as The Count counts the “You”s in YouTube:

I’d be lying if I said I wasn’t feeling some feels when the song slows down and the Count counts the viewer as the one billionth viewer. I’m a sucker for Sesame Street. This new video is pretty tremendous, but it will be hard to unseat this one as my all-time favorite Count video:

Congratulations on your one billionth view, Sesame Street. It would be hard to think of a show that deserves it more.