Sentences That Contain Every Letter of the Alphabet 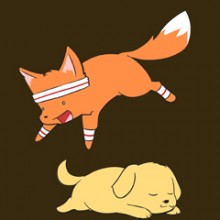 A pangram, or holoalphabetic sentence, is a sentence that contains every letter of the alphabet at least once. The most famous pangram is probably the thirty-five-letter-long “The quick brown fox jumps over the lazy dog,” which has been used to test typing equipment since at least the late 1800s.

Pangrams are an important tool for testing typing equipment and compactly showing off every letter of a typeface; trying to pack every letter into as short a sentence as possible is also a sort of sport among linguists and puzzle-solvers.

Here are a few that are famous or otherwise cool:

●”Jackdaws love my big sphinx of quartz”: Similarly, used by Windows XP for some fonts. (31 letters)

●”Pack my box with five dozen liquor jugs”: According to Wikipedia, this one is used on NASA’s Space Shuttle. (32 letters)

●”Cwm fjord bank glyphs vext quiz”: Amazingly, this 26-word-long sentence uses every letter only once, though it uses some pretty archaic words; translates to “Carved symbols in a mountain hollow on the bank of an inlet irritated an eccentric person.”

●”How razorback-jumping frogs can level six piqued gymnasts!”: Not going to win any brevity awards at 49 letters long, but old-time Mac users may recognize it.

(via Wikipedia; title image via woot.)