Why the Lack of Award Attention for Selma is Deeply Unsettling 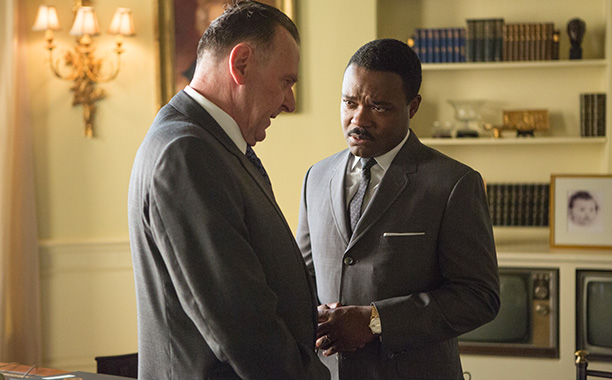 By now, the three major award ceremonies in the field of film have announced their nominations, with the start of this week seeing the 72nd Golden Globes take place, with the BAFTAs and Academy Awards to happen in the near future. Among the heavy hitters, there’s very little surprise found in the likes of The Grand Budapest Hotel, Birdman, Boyhood and The Imitation Game, amongst others, leading nominations. In fact, there’s more controversy to be seen in whose been left out. The Lego Movie has been snubbed by the Oscars and Christopher Nolan’s Interstellar and Dan Gilroy’s Nightcrawler have both been left in cold in some way for award contention. The biggest question mark, however, lies over Selma, a film whose subject matter and cultural relevance make it an absolute shoe-in on paper to sweep any and all acclaim available, but is completely conspicuous by either its absence entirely from major categories, or being snubbed for any it did manage to make.

Directed by Ava DuVernay, the Martin Luther King Jr. biographical drama has been a home-run from critics as it makes its way around the globe. Not least because its a great film in its own right, but also because of how poignant the subject matter is. With the events of Ferguson and the killings of Michael Brown and Eric Garner still reverberating heavily on not only the American conscience, but worldwide too, there’s almost a need for a film like Selma to remind us of where we came from, and what we still need to change. Unlike the diatribes of slavery such as Django Unchained and 12 Years A Slave, Selma‘s subject matter of the peaceful civil rights movement is much more crucial, a striking reminder of what people of color went through just to be able to vote in America – and an even more striking reminder of what’s still left to be done. Selma deserves to win awards on the back of how good a film it is anyway, but winning would have sent a stoic message of acknowledgement and of allegiance with the still-ongoing civil rights debate for people of color in America. Why is it, then, that the film is simply being glossed over?

Well, the statistics for the Academy Awards may reveal a little as to why. To date, only four men of color have won ‘Best Actor’, only one woman of color has won ‘Best Actress’, and 12 Years A Slave was literally the first film made by people of color to win Best Picture, with Selma‘s only major nomination being the first that was produced by women of color to be nominated. Its not even just people of color, either, only four women have ever been nominated for best director, so DuVernay’s snub is right in line with the Academy’s trends. In fact, outlets have realized that this is literally the whitest Oscars in 19 years. I’m apprehensive to use terms such as ‘white-wash’ as I find them to be a touch over-used, but considering 12 Years A Slave managed to get Best Picture last year, and very deservedly, I might add, it looks like the Academy have made a conscious ‘well, you’ve had your fun, back to business’ decision and gone back to giving the awards to whoever they feel deserve them, i.e. white, male film-makers.

Selma isn’t the only film of its kind to get treated in such a way, either. Amma Asante’s Belle, a wondrous slice of period drama about the first woman of color to be included prominently in a painting, hasn’t received any award attention whatsoever. Now, the Academy was always a lofty expectation for a first-time British film-maker, but the BAFTA’s completely ignoring the film lineates the British Academy with the American in a seeming disinterest in awarding and acknowledging people of color or women, with the Golden Globes keeping up the precedent. Now, in terms of overall quality, the films that did make the cut are, mostly, very worthy of the mantle. The Golden Globes big winners were Boyhood and Birdman, two features that are very deserving of the attention, but at the same time, its technical proficiency against actual historical relevancy. Objectively, Boyhood in particular, the favorite to sweep the Oscars at this stage, is an artistic triumph in how the medium has been utilized to tell a story in real-time, but Selma’s an artistic triumph in how a historical film can be given a new relevance and shed a discerning light on current events. To put it simply, Selma‘s story is more worthy of attention right now than Boyhood‘s.

The relevance of these awards is always something of a passing interest. They’re announced, we make sly bets on who wins, then the winners happen and we all either rejoice or sigh in disappointment, and life goes on. They don’t change what we like, and they sure don’t justify what’s good and what isn’t, but they are a statement. They’re a bullet point, a chorus of recognition. Even with just a nomination, getting on the list of Academy Awards is something that follows you for the rest of your career. You’re a part of history. Not only is Selma not being given the awards, DuVernay’s extensive work to honor and bring to the fore the work of one of the biggest names in civil rights, right down to the emulation of his speeches to alarmingly good effect, is being ignored completely. In doing so, they’re ignoring an already under-represented population in film at a time when those same civil rights that were worked for at Selma, Alabama are being questioned, and that’s just a little sickening.

Anthony is a social care-studying, opinion-having writer from the fair isle of Ireland. Usually found as Deputy Editor over at The Arcade, where he spends his time ranting about films among anything else that takes his fancy, he can be contacted via Twitter @AntoMcG, and he is a firm believer in the zombie apocalypse.