Back in the day we used to call 'em GPOYs. That day was only about eight months ago, though. 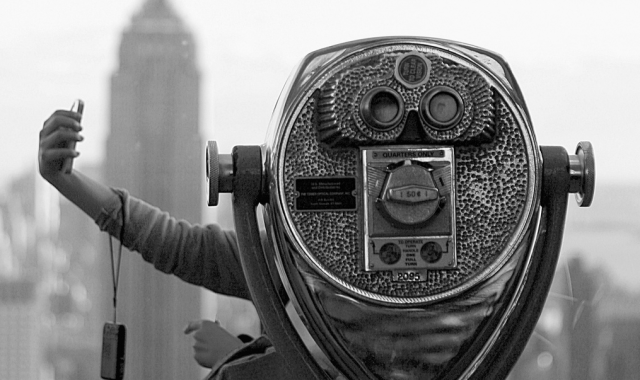 The word just came down from Oxford Dictionaries — the Word of the Year, that is! (See what we did there?) And if you like complaining about things, then you’re in for a treat, because the word they’ve chosen is “selfie.” Cue incessant whining about the downfall of modern society at the hands of our self-absorbed teenage population, or whatever it is people over the age of 40 are mad at on the Internet today.

Anyway, in case you’ve been living under a rock for the past year, “selfie” is a term used to describe the pictures people take of themselves, usually by holding their camera or phone at arm’s length in front of their face. According to Oxford Dictionaries, the word itself was apparently first used on an Australian forum in 2002 and didn’t get popular worldwide until this year.

Previous Words of the Year include “GIF” in 2012, “squeezed middle” in 2011 — no, seriously — and “refudiate” in 2010. Not to be outdone, the UK version of Oxford Dictionaries usually has their own separate Word of the Year as well. Last year it was “omnishambles,” a term coined by writers of The Thick of It for Peter Capaldi’s character, Malcolm Tucker. Omnishambles? What, you think you’re better than us, Britain? Because despite what you tell us all to call you, you’re not so great, you know.

Still, having an easy word to describe the pictures you take of yourself isn’t all that bad. After all, people have been infatuated with what their own faces look like forever and that this isn’t really a new concept, as the OD blog tells us:

Self-portraits are nothing new – people have been producing them for centuries, with the medium and publication format changing. Oil on canvas gave way to celluloid, which in turn gave way to photographic film and digital media. As the process became snappier (pun intended) so has the name. And now as smartphones have become de rigueur for most, rather than just for techies, the technology has ensured that selfies are both easier to produce and to share, not least by the inclusion of a button which means you don’t need a nearby mirror.

And hey, at least we get stuff like this out of it.

(via PBS News Hour and Oxford Dictionaries, image via mollybob on Flickr)
Meanwhile in related links