The gratingest show on Earth. 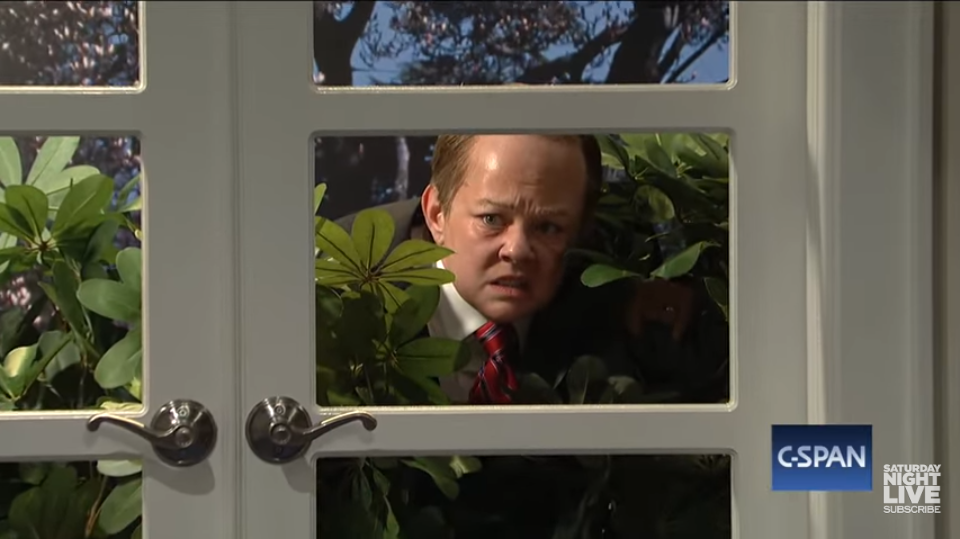 Big news in the Trump administration that isn’t directly related to Russian scandals or bad policies: Press Secretary Sean Spicer has resigned his post, and everything has gone bananas—but in a funny way this time.

Spicer reportedly tendered his resignation in response to the hiring of Anthony Scaramucci as White House Communications Director, and he apparently did not want to talk about how Spicey he was feeling over the whole thing—slamming the door in a reporter’s face after a question about it. Spicer’s role had been downplayed for weeks through off-camera press briefings and Sarah Huckabee Sanders standing in for him (and now taking over his role when he departs), and I guess this was just the last straw for him—rather than all the obvious lying about things both important and decidedly not—for reasons currently known only to him and the White House bushes.

Scaramucci, on the other hand, has said bad things about Trump in the past that Trump apparently loves lording over him, which should make for a fun dynamic. It’s probably also why Scaramucci quickly set about deleting tweets in which he’d been critical of Trump (but left pro-Clinton ones), which is probably unnecessary, because I’m pretty sure Trump only knows how to send tweets, but better safe than sorry, I guess.

He also introduced himself at the first on-camera press briefing in a while, and he did not disappoint, at least as far as what we’ve come to expect from the Trump administration. He already defended Trump’s claims of voter fraud, which are a transparent effort to further the Republican party’s existing voter suppression efforts and push them into even worse territory. He also called Spicer “articulate,” to which there is only one response: 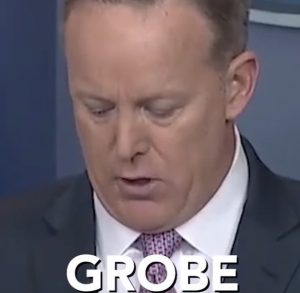 He also had to do a little damage control (the perpetual state of this administration) and say he didn’t have any “friction” with Spicer or Trump admin Chief of Staff Reince Priebus, but then also seemed to admit there is friction but that they thrive on it because business or something. And in keeping with smoothing things over, including his past criticism of Trump, he claimed to “love” the man. Repeatedly. So much that CNN made a montage of it:

“I love the President”: What Anthony Scaramucci said about President Trump during the White House press briefing https://t.co/27KlKPPuah

Which really just makes a whole lot of sense when you’ve heard how much Trump loves a good public pledge of loyalty. At times like this, though, you have to stop and remember what’s really important in life/to these jackals:

“I hope he goes on to make a tremendous amount of money,” @Scaramucci says of @PressSec as he announces Spicer’s departure

And then there was this:

The Mooch in one GIF pic.twitter.com/SuFDrN3nmG

Trump had only good things to say about Spicer in parting, giving him the best compliment he knows: Spicer got great ratings. Well, Donny, if that isn’t the best thing you can say about a person, I don’t know what is. Truly, it’s all that matters in this world—so much that it’s not the first time Trump commented on it in regards to Spicer.

And of course, the Internet is taking it in stride:

Sean Spicer retiring so he can enjoy the rest of the summer anime convention season in peace. pic.twitter.com/2OikgyiplX

Ex-congressman on Spicer: “We’ll always have those six months of you lying to us every single day” https://t.co/NQcD2m0aHW pic.twitter.com/6SHbSKJWhQ

Spicer was literally replaced by a Hillary Clinton donor https://t.co/66ZRlvTjLr

Hey, at least Spicer got to not meet the Pope that one time.

RIP Sean Spicer. Died from being thrown under a bus.

was just remembering when Spicer, an idiot, said the AHCA was a good bill because it made for a shorter stack of paper than Obamacare

The fact is, Sean Spicer had the largest group ever to attend a going away party. Period.

Oh no Spicer resigned? Come back, Pope Francis is at the White House today, he wants to meet you! Haha made you look.

Honestly, I’m probably going to miss Spicer in a Stockholm syndrome kind of way. The way he seemed to be angry at everything that was happening all the time while staying determined to make the best of it was really relatable to me—except the whole part about defending this embarrassing administration. Don’t forget they’re still trying to ruin health care! Their efforts may have fallen apart for the moment, but don’t stop calling your Senators. We all remember what happened in the House.