The Sean Spicer Joke Should’ve Ended on the Emmy Stage. The Problem Is, It Didn’t. 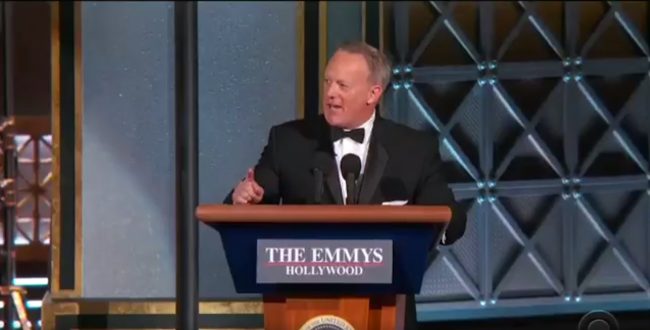 One of the most random moments of Emmys 2017 was definitely Actual Sean Spicer coming out on stage a la Melissa McCarthy, complete with rolling podium, and being the punchline to a joke set up by Stephen Colbert. This moment definitely elicited some mixed reactions, both from the audience in the auditorium, and the viewing audience at home.

And when I say mixed reactions, I mean nobody likes Sean Spicer. The “mixed” part comes in as to whether or not it was appropriate to even have him at the Emmys, even if it’s so that we can all laugh at him and the way he did his job. Because make no mistake, the joke was about the fact that he was a liar who served a liar and who spouted off lies every day in the form of “press briefings.”

The look on Melissa McCarthy’s face tho 😂

I’ve gotta say, Melissa McCarthy’s look was my favorite part of that whole thing. She was begrudgingly-tolerant-out-of-politeness face of all of us. Some other reactions:

This isn’t okay. It’s not a redemption arc. This is a grown man who chose loyalty to a sociopath instead of the country. Fuck him forever. pic.twitter.com/JBrCiZM85J

For the record, no one at that Emmys ceremony wants Hillary Clinton to go anywhere.

Not funny. He lied so much and is complicit.
But…. look at the mostly white crowd laugh and seemingly ‘forgive’ him. Eff him. #Emmys

I think they look embarrassed for him. Embarrassment makes me laugh. ☹

And that was the thing for me when I watched it. I was shocked. I couldn’t believe he was there, and that the Emmys had not only invited him, but got him to agree to it. And when I saw those in the audience laughing, it felt like they were laughing because they couldn’t believe that he agreed to it, either.

The thing is, I could accept his appearance, because it felt like the desperate action of a man who knows he’s wrong. It was shocking, because it was so hugely uncomfortable, and as I watched I sat there thinking, Oh dude, you’re trying to ingratiate yourself to the people you worked against now because you’re no longer employed. Oh, no … And that was fine by me. It didn’t feel “normalizing,” to me. It felt like an effective joke that I was surprised Spicer agreed to be a part of.

After all, Colbert has a history of inviting hateful people on to his show to make fun of them without them realizing he’s making fun of them. It became much less fine by me once I saw what happened to him afterwards. What I expected was that he’d just go home after that. Clearly, this is not your crowd, right? What did happen was this:

Stomach churning. For months #SeanSpicer lied to our faces over & over, now here he is soaking up adulation post #Emmys. Pics @chrissgardner pic.twitter.com/IHHiGsrc1t

Whoa, whoa, whoa! Suddenly, what I thought was a well-deserved joke at Spicer’s expense turned into “let’s all hang out?” Now, I’m sure these photos were staged by a photographer who thought it’d be priceless to get shots of Spicer with all these people, but the fact is that all these people could’ve refused and walked away. But they didn’t. They treated Spicer like the cute little Emmys mascot. And that, to me, is the thing that normalizes him and doesn’t hold him accountable.

I try to look at things with as much compassion as possible. When I watched Spicer last night, I saw a man who is not too bright and not particularly strong-willed, despite his bluster (again, this is a man who responds to pressure by hiding in the hedges), who was basically a puppet in his job (which is what made this not-too-bright, not-strong-willed man “perfect” for the job until he cracked under the pressure and weight of the administration’s ever-growing lies) making a desperate attempt at being liked. It was more pathetic than offensive.

What was offensive was all the after. The selfies, the drinks, the celebrity parties. I’m capable of forgiveness, but I’m generally more willing when the person shows some sense that they know what they did was wrong. A joke at his own expense isn’t Spicer demonstrating that. Not by a longshot.

And as for his appearance “taking away” from a beautiful night of diversity and achievement for women and people of color? There’s nothing that could take that away. By the end of the ceremony, I was so floored by all the milestone wins, all the black and brown people with awards in their hands, all the women with a hand in telling female-led stories, particularly women over 50, that Spicer’s appearance was barely a blip on the radar. Just as his existence is to me in general, except when I have to write about him for my job.