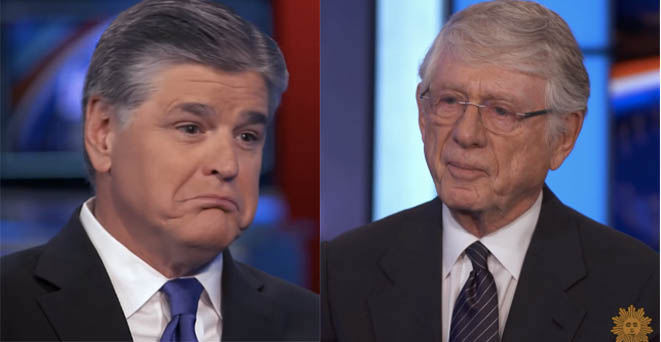 While we’ve seen some truly stellar stand-out journalism over the last year or so, much of the mainstream media has spent the last campaign cycle and current presidency under fire for its commitment to trying to exist without a spine.

It can be frustrating when media hosts and pundits praise Donald Trump as finally discovering his inner president after managing to read off a teleprompter for a full hour without falling asleep or yelling about his “many enemies.” You might be angry when you read that major outlets are still scrambling to find seemingly any reason at all to explain why Clinton won, when study after study can’t help but support the idea that those very outlets had extraordinarily biased coverage that demonized Clinton while normalizing Trump. (Not that you can place the whole of the blame on their feet. But it would be nice to cut the deflection in maybe half.)

And then there’s Ted Koppel. A legendary figure in the history of modern news, Koppel–who guided viewers through the Iranian hostage crisis–doesn’t have a place in the current state of attack-based, yelling-over-each-other news. He talks slowly, and softly, and thoughtfully; and hearing him speak to someone like, say, Sean Hannity, you might think he would get easily steamrolled, in this era when “right” has become synonymous with “loudest.”

Luckily, we would be wrong.

This weekend, CBS Sunday Morning gave us Ted Koppel exploring the “great divide” in politics and news. Koppel says that “a Pew study finds 81% of voters say they cannot agree with the other side on basic facts, which may owe something to the president’s campaign against ‘fake news.'”

So Koppel chose to talk to Hannity, one of the greatest examples of blowhard fact-shunning. And while Hannity tried to protest that the American people can tell the difference between an opinion show and a news show, Koppel wasn’t convinced. Because maybe if “opinion” shows offered opinions on facts, rather than opinions on opinions masquerading as facts (or were at least honest with the public about which is which), things would be different.

Did you watch the clip to the end? To the moment when this brilliant, soft-spoken man shuts Hannity the eff down for trying to interrupt him? Okay, good.