Because Everybody Loves Bacon: Watch Sea Lice Consume A Pig From The Inside Out 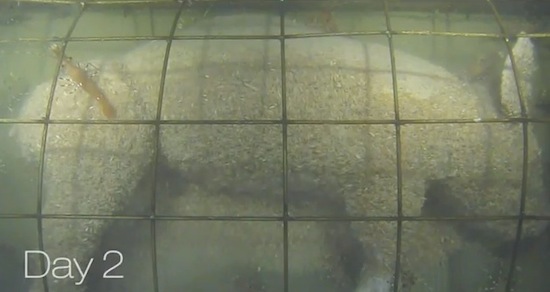 Have you ever wondered what a pig would look like if you turned it into a centimeters thick living carpet of writhing underwater scavengers? Wonder no more, thanks to the latest work from forensic scientists at Simon Fraser University in British Columbia. In an effort to better understand how human corpses decompose in seawater, the research team placed a pig carcass  — the most accurate, though least flattering, analog for human decomposition — in a cage in the nearby Salish Sea to see how it would fare. It took a colony of sea lice just 4 days to colonize the corpse inside and out, reducing it to a pile of bones.

Perhaps the weirdest part of this whole experiment? The work was done, at least in part, to answer questions about decomposition that may explain why the heck so many severed feet keep washing up on beaches in British Columbia and neighboring Washington. Since 2007, a dozen disembodied feet, many still in their sneakers, have been found around the region. Researchers hope that learning more about how sea lice and other ocean life can decompose a body can provide an explanation for the  prevalence of detached limbs discovered in the area. Forensic researcher Gail Anderson told New Scientist

This work is showing the public how crab and shrimp activity can result in severed limbs and that’s [sic] it’s a normal process.

Yup, a totally normal spate of feet washing ashore in running shoes. Move along, folks. Nothing to see here.