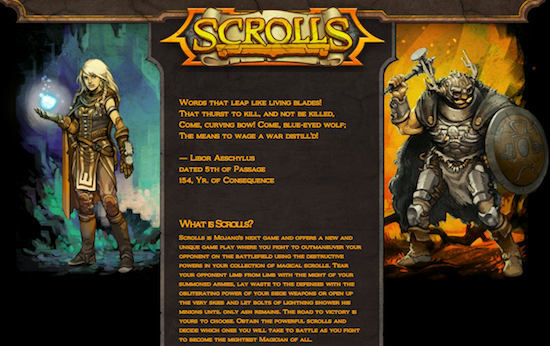 We occasionally write about this game called Minecraft on this site, and when we heard that the Minecraft team had revealed details about their next project at GDC, our ears naturally perked up. Titled Scrolls, the new game from Mojang will take the form of a collectable card game (!), and aims to remedy “common gameplay flaws” in the CCG genre.

You play Scrolls online against other players, or offline in a campaign mode. Each player chooses a selection of scrolls, representing creatures, spells and structures under their control, and chooses where to place them on a game board.

“The board is divided so that you control one side each.” says Jakob. “As your units attack, they charge across your opponent’s side of the board and will damage him unless blocked. As every unit comes with a variety of different abilities, it’s not as simple as just placing your units in front of your opponent’s to feel safe. You will need to pay close attention to the positioning of you opponents units, siege weapons and building and adjust your strategy according to that.”

On a broader level, the game is about acquiring those cards: players can buy packs of randomly selected cards for real money, or earn them for free by playing the single player campaign against the AI. Some cards can only be bought, others can only be earned, but all can be traded on the auction house for in-game currency.

There are more details in lead designer Jakob Porser’s interview with PC Gamer, but the takeaway is this: It’s a CCG-style game, there will be some stuff which can only be bought and some stuff which can only be acquired by grinding it out, and the game will attempt to take advantage of the fact that it lives in computers rather than on paper by including complicated effects which could be tedious to calculate otherwise. Oh, and Penny Arcade‘s Jerry Holkins will be penning a backstory for the game, so that’s pretty neat.

The success or failure of Scrolls will be all about balanced gameplay — indeed, “computer CCG” and particularly “content that can only be bought” might be very scary phrases otherwise, but considering the sublime balance struck by Minecraft, we’ll give Porser and Mojang the benefit of the doubt and wait to see what’s in store.

(For a take by someone who does not give them the benefit fo the doubt, read this post by Sean Malstrom: “Scrolls is nothing more than a carbon copy of the business model of the slimy snake oil trend that many board games have recently become. The model is not to sell a ‘game’ but only to sell pieces (e.g. units) that tend to be randomized in packs. The idea is for the players to keep buying more and more of these ‘packs’ to create a constant revenue stream.”)

A teaser site has been set up at scrolls.com, where you’ll soon be able to add your name to a mailing list to receive new info on the game.