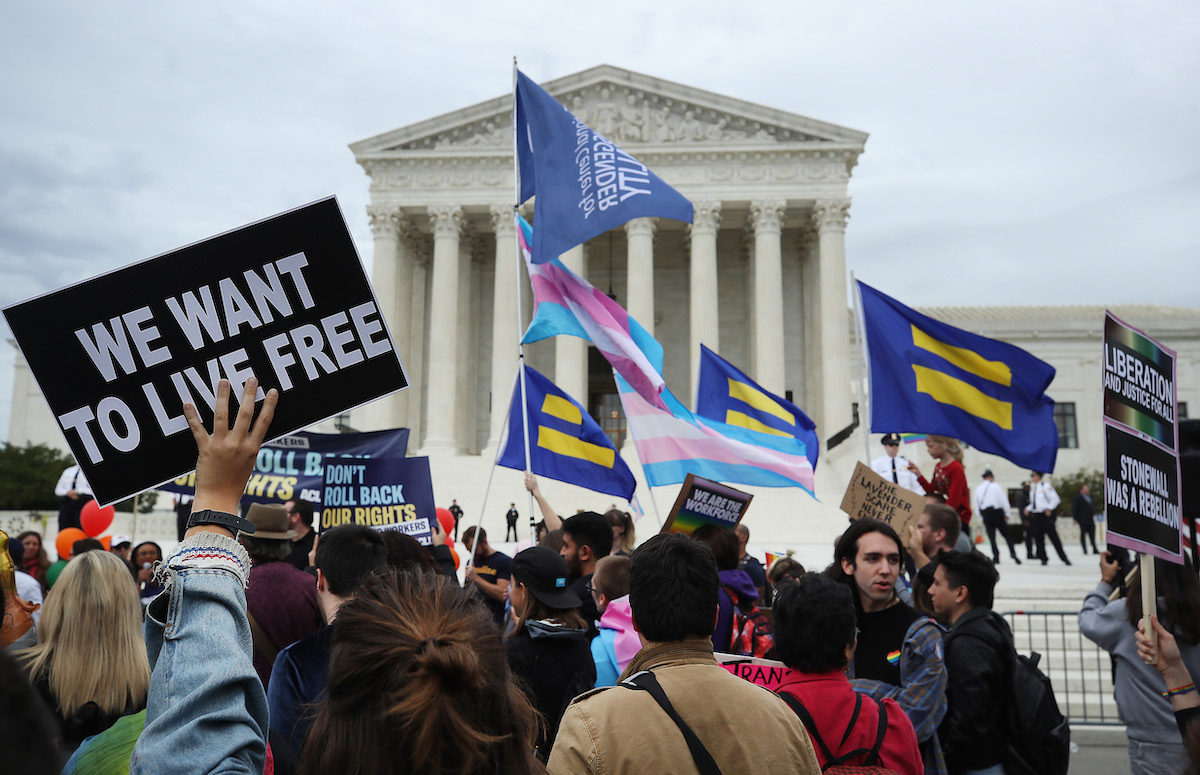 The Supreme Court is officially back in session, and it’s got a whole host of landmark and potentially terrifying cases on the docket. Abortion and LGBTQ+ rights are at the center of the conservative-heavy, Roberts-led court. Among the cases the court will be considering is Harris Funeral Homes v. EEOC, the first-ever transgender rights case to come before the Supreme Court.

The court is hearing three cases today and all of them are centered around interpreting Title VII, the part of the Civil Rights Act that prohibits employment discrimination on the basis of sex. What these cases will determine is what “sex” actually means.

Both Bostock v. Clayton and Altitude Express, Inc v. Zarda center on sexual orientation as well as gender stereotypes. Gerald Bostock says he was fired from his job in child welfare services when his employer found out he was gay. Donald Zarda says he was fired from his job as a skydiving instructor for being gay and also, relatedly, not fitting the “macho” stereotype the company expected from its employees.

The lower courts in those cases came out with two different decisions. The U.S. Court of Appeals for the Eleventh Circuit ruled against Bostock, saying Title VII’s ban on sex discrimination doesn’t extend to sexual orientation. The Second Circuit court, though–which was ruling in Zarda’s case–said that it did. So it’s up to the Supreme Court, which is hearing both cases together, to now set the official precedent for how Title VII will be interpreted when it comes to sexual orientation.

And that brings us to Harris Funeral Homes v. EEOC, SCOTUS’ first trans rights case. Aimee Stephens is a Michigan funeral director who was fired after she told her employer of six years (who is a self-described devout Christian) that she is transgender. The official and terrible excuse her boss gave was that if Stephens transitioned at work, she’d be in violation of the company’s gender-based dress code.

First of all, everyone should care about this case–I mean, obviously, because trans rights are human rights, but also because this could have farther reaching implications beyond just the trans community. Like with Zarda, it could also affect other queer people or just anyone at all who doesn’t conform to traditional gender stereotypes around dress and presentation. (By the way, the Supreme Court has previously said that gender stereotyping is prohibited under Title VII but that hasn’t been explicitly extended to include LGBTQ protections.)

But this case is set to establish some really important precedents when it comes to transgender rights, not just in how the court eventually rules but also how they proceed in hearing it. One major issue is how they handle the use of Stephens’ pronouns.

The Trump administration filed a brief back in August that sided with Harris Funeral Home. In an interesting and also super weird move, the Department of Justice used no pronouns at all when discussing the case, only referring to Stephens by name. However, Alliance Defending Freedom–a conservative Christian legal organization that’s representing Harris in the case–has been misgendering Stephens at every opportunity. They even went so far as to write in their brief that using someone’s preferred pronouns is “prejudicial error” and that “judges are not free to choose to respond with tolerance and understanding.” Seriously.

Here’s what Jessica Mason Pieklo (no relation to our Jessica Mason who wrote this awesome primer of these cases last month!) said about the importance of this misgendering on a recent episode of the podcast Boom! Lawyered:

That is really significant, and it’s significant not just because they’re being big jerks about it when they do that. So, this is the first transgender rights case to come before the Supreme Court, ever. How the court deals with the issue of misgendering plaintiffs in this context is going to send us a lot of signals about what the conservatives on the court, in particular, think about this area.

We already have every reason to believe that they are going to be hostile to Stephens here, but also, how do the liberals on the court deal with this? This is absolutely going to tell us a lot. Not just about this case, but future cases too. It’s not just that it’s rude. It’s not just that it is impolite. It’s that it sets a legal frame for the case, too. So, what the court does with it and how they handle it, and in particular I would love to hear a justice correct someone from ADF during oral arguments on that. That would really send a strong signal.

So there’s a lot at stake here, both in terms of the outcome of this case as well as the framework it sets for transgender rights cases moving forward. We’ll be back later this week to talk about the actual arguments the court heard today so stay tuned for that.

To be clear, they don’t get to rule on our humanity. They’re ruling on their own.