Abortion Is Heading Back to the Supreme Court. So, Is Roe v. Wade in Danger?

The news is not good. 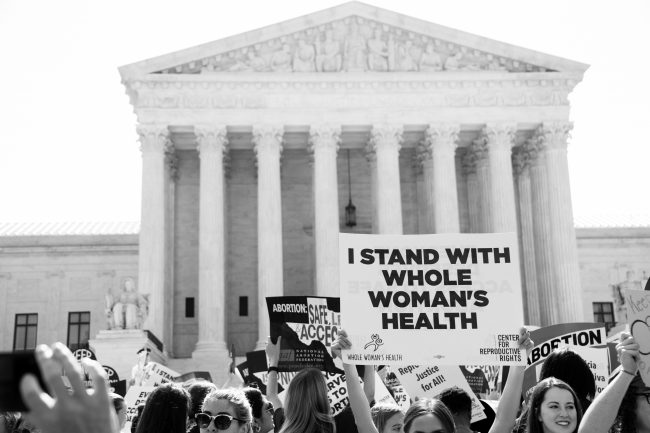 The moment pro-choice advocates have feared since the confirmation of Brett Kavanaugh is coming. The Supreme Court has granted Certiorari – meaning it will hear the case – in the matter of June Medical Services v. Gee. This case challenges the constitutionality of a Louisiana law requiring abortion providers to have admitting privileges at local hospitals, an issue which already came before the court barely two years ago. But a lot has changed since then, and advocates fear this may be the beginning of the end for the court’s support of a federal, constitutional right to abortion as set out in Roe. v. Wade.

June Medical Services v. Gee is a test for a so-called TRAP (Targets Restrictions Against Abortion Providers) law. These laws on their face allege to be about patient safety, but in practice place undue restrictions on abortion providers that can ultimately force them to shut down. They require clinics to have surgical suites of providers to have admitting privileges  and other such expensive and cumbersom requirements. Admitting privileges in particular are hard to obtain because they often require that the doctor admits a certain number of patients per year – and since abortion is low complication procedure, that doesn’t often happen. If all this sounds familiar it’s because these sort of laws are a common attack on abortion rights, and a nearly identical law was challenged and considered the Supreme court in 2016 in Whole Woman’s Health v. Hellerstedt.

In Whole Women’s Health, Justice Stephen Breyer found that the Texas law in question constituted an undue burden on the right to abortion. Breyer was using a legal standard based on what is possibly the most important abortion rights case after Roe, Planned Parenthood v. Casey. That case held that “a statute which, while furthering [a] valid state interest, has the effect of placing a substantial obstacle in the path of a woman’s choice cannot be considered a permissible means of serving its legitimate ends.”

The Louisiana law at issue in June is nearly identical to the Texas law in Whole Women’s Health, so why did the Fifth Circuit court of appeals uphold the Louisiana law an ignore court precedent? Well, the Fifth Circuit held that it was somehow easier for doctors to obtain admitting privileges in Louisiana than in Texas, and that small factual difference was enough to spare the law. But the real reason is to put the issue once again before the court, nowthat the balance of power on abortion issues has shifted.

Like many controversial cases, there was a hard division in the court in Whole Women’s Health, with only five justice voting to overturn the law. One of those men was Anthony Kennedy, long seen as the last bulwark against pro-life jurisprudence and the man who Brett Kavanaugh replaced. Now that the balance of the court has shifted, anti-abortion forces are eager to begin chipping away at women’s rights. And, unles Robert or Alito surprises us, they will very likely be successful.

The most pressing question is: will the outcome of this case be a full reversal of Roe v. Wade? No; that’s very unlikely. The legal test at issue is the one outlined in Casey – what sort of restrictions can states place on the right to abortion and if they create an undue burden; not the very right to abortion itself. However, if the court goes against precedent and overturns Whole Women’s Health – as it is likely to do – it’s still very bad news for choice.

An anti-choice victory in this case will mean that states will be free to enact more and worse TRAP laws that will have the effect of shutting down abortion providers. In June, the law in question will likely lead to the closure of two out of three of Louisiana’s abortion clinics. It’s a grim future and it won’t get better, as there are more stringent laws and bigger cases on the horizon.

The most pressing is a developing case in Georgia, around the state’s “heartbeat bill,” which would ban abortions after doctors can detect a fetal heartbeat and essential stop abortions after six weeks of pregnancy. Just a few days ago, a federal judge temporarily blocked the law, but this is only a temporary victory, because it puts the law in the track to the Supremes and, if the fact they are willing to even hear and consider the June case is any indication, they could be eager to reopen the Roe can of worms.

Not to be alarmist, or tell you things you already know, but this isn’t good for the right to abortion. Not only is the court now tipped against the right, most lawyers will tell you that while the outcome was correct, the legal underpinnings of Roe are shaky at best and the opinion itself is badly written. It’s rightly decided, poorly supported case and it’s extremely vulnerable.

So, is there any hope at all? Well, yes. There’s always hope, Maybe Brett Kavanugh will get impeached for lying during his confirmation. Maybe President Pelosi will do what FDR threatened to do when the Supreme court was considering undermining the new deal and simply add more justices to the bench and re-balance the court that way. In this turvy-topsy world, anything is possible. But the most important issue will remain organizing and advocating on a state level to elect local representatives who value choice and women’s health.