State Senator Has Pretty Decent Suggestion After NY Mayoral Candidate Accused of Assault: “Maybe It’s Time for Us To Stop Voting for Men” 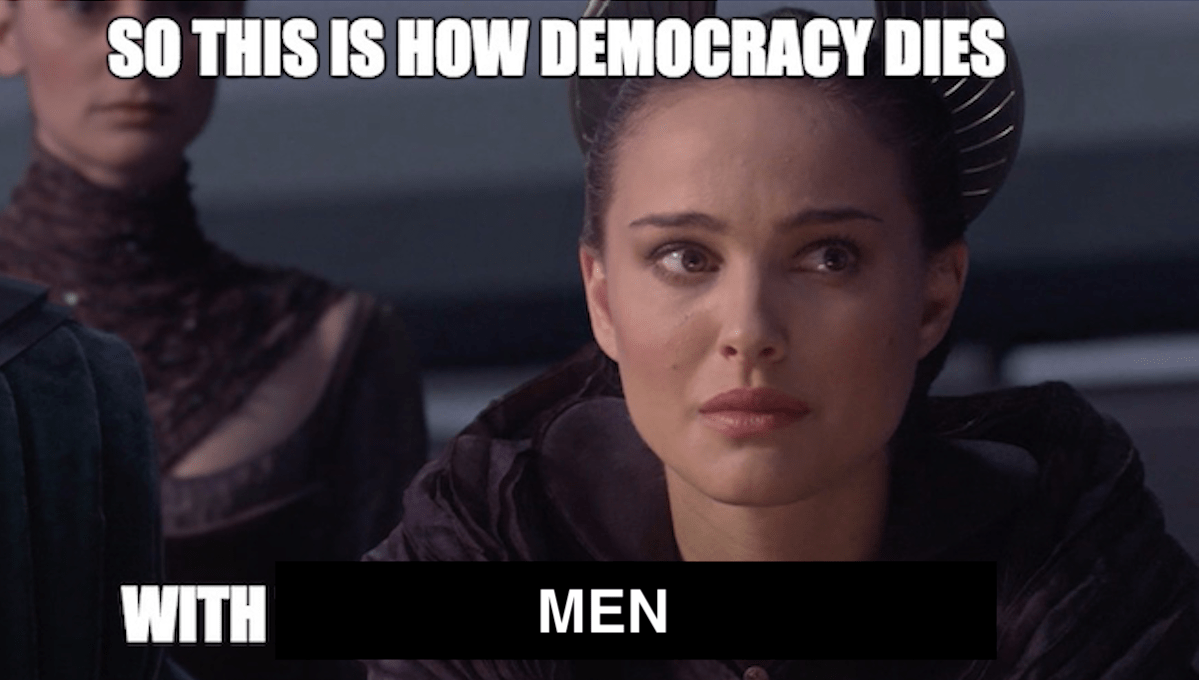 A political consultant named Jean Kim has accused New York City mayoral candidate Scott Stringer of repeatedly making unwanted sexual advances and assaulting her when she worked for him as an unpaid intern 20 years ago.

In a press conference Wednesday, Kim said Stringer “repeatedly groped me, put his hands on my thighs and between my legs and demanded to know why I would not have sex with him.”

According to the New York Times, Stringer “warned her not to tell anyone about his advances, some of which she said took place during taxi rides.”

I’m sure there are plenty of people who read that and think, “Well why did she keep getting into taxis with him?” If that’s you, stop it. That’s not the question here. The question is “Why did he keep assaulting her?”

Gothamist, which first reported Kim’s accusations, writes, “Kim also said that Stringer touched her inappropriately during taxi rides to and from campaign events, repeatedly putting his hands on her thighs and between her legs.”

“She said he asked her on more than one occasion, ‘Why won’t you fuck me?'” the outlet writes.

Stringer also allegedly told Kim that he could make her the first Asian district leader on the Upper West Side but that he told her, “You would have to prove your loyalty to me.”

Multiple New York Democrats told the New York Times that while they don’t know the details of what happened (Stringer has denied the allegations and says the two had a consensual relationship), they know Kim and trust her character.

In recent days, Stringer has lost the endorsement of at least one state senator (Jessica Ramos) and another, Liz Krueger (who has not yet made an endorsement in the mayoral race) said she was “surprised and disturbed” at the allegations, which she said she had no reason not to believe are credible. (Full disclosure: TMS editor Kaila Hale-Stern’s sister works for Sen. Krueger.)

Krueger also had a pretty great suggestion in general: “Maybe it’s time for us to stop voting for men,” she told the Times.

This is obviously a joke but also … is it? Does it need to be? Yes, yes, this is a classic “not all men” situation but why are there so many men? Why do so many men in positions of power over young women—not to mention over the population as a whole—feel totally confident abusing that power?

We’re right in the middle of the Matt Gaetz debacle, who is not only facing accusations of sex trafficking a minor, but also of making a game out of trying to sleep with interns and staffers while he was in the Florida House.

Stringer has spoken out against Andrew Cuomo in the wake of the many allegations against him, saying the governor should resign. Yet now he says the zero-tolerance policy for sexual harassment which he backed doesn’t apply to him.

“The allegations against Governor Cuomo are serious and multiple and they are in the workplace,” he told the Times. “I don’t think we are in the same situation.”

What, then, is the difference? That his allegations are serious and singular and they were in the workplace?

This is also far from an American male politician problem. Tens of thousands of people have been protesting in the streets in Australia over the country’s sexual assault crisis, sparked largely by former parliamentary staffer Brittany Higgins’ decision to speak out earlier this year, saying she was raped by a former colleague inside of the Parliament House. Days after she did so, accusations of rape from 1988 surfaced against Attorney General Christian Porter (which he has denied). According to the New York Times, a “flood of accusations against members of Parliament and employees at every level followed.”

Those current and very recent examples do not even constitute a tiny drop in the bucket of pure sewage that is this problem. Honestly, at this point, I’m with Krueger.