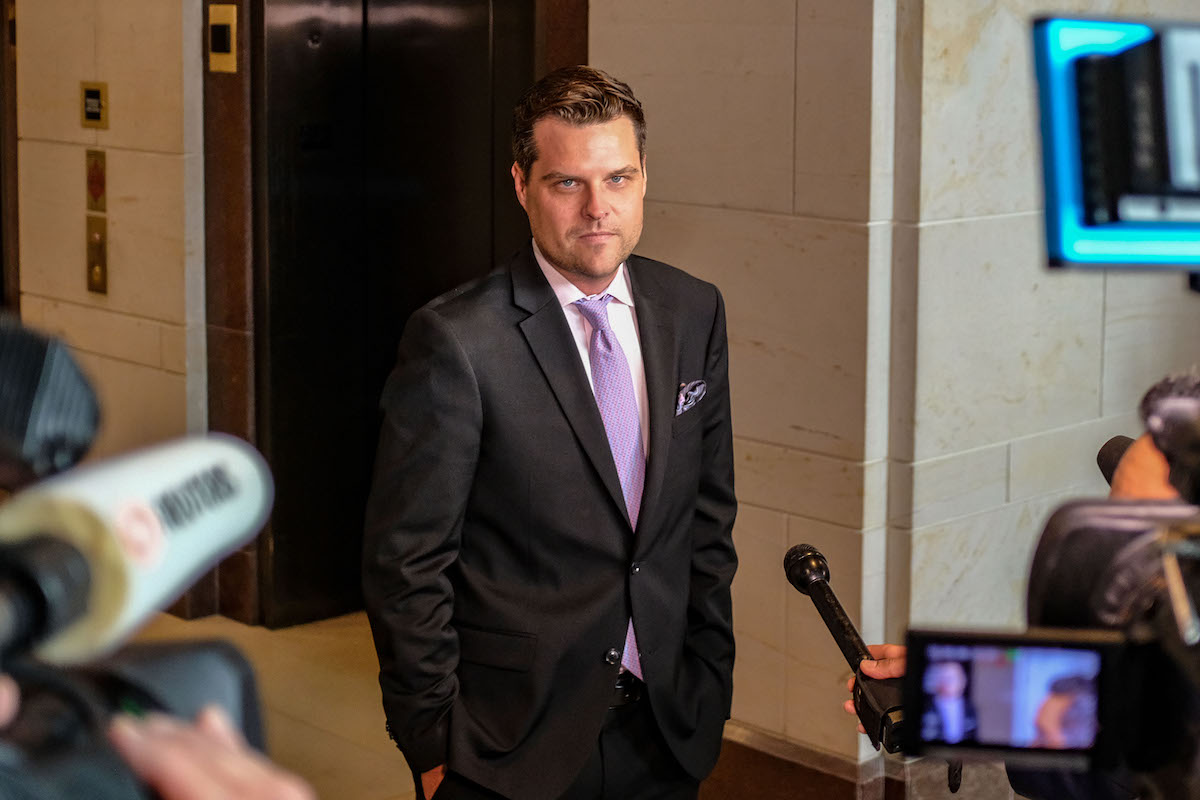 The saga of the Justice Department’s investigation into Matt Gaetz has only gotten more bizarre since it was first made public by a New York Times report earlier this week.

According to CNN, “Investigators are also pursuing allegations from witnesses and other evidence that Gaetz may have used cash and drugs in his dealings with young women.”

Also, Gaetz’s claim that he’s being criminally extorted has now been linked to an ex-FBI agent who went missing in Iran 14 years ago. Gaetz says that a former Air Force intelligence officer named Bob Kent, along with attorney David McGee, whom Gaetz had already named as the person extorting him, said they could make Gaetz’s “future legal and political problems go away” in exchange for a $25 million “loan” that they would use to get that FBI-agent-turned-P.I., Robert Levinson, out of prison in Iran.

Less surprising than all of that is the degree to which this probe has revealed that Gaetz is (allegedly) a gigantic creep. I think we all could have already surmised that he’s not a great guy but if you’re wondering why very few of his colleagues are rushing to defend him, it’s because he appears to have replaced even Ted Cruz as the most disliked member of Congress.

According to the Daily Beast, “More than a half-dozen lawmakers have spoken to these reporters about his love of alcohol and illegal drugs, as well as his proclivity for younger women. It’s well-known among Republican lawmakers that Gaetz was dating a college student—one over the age of consent—in 2018. She came to Washington as an intern.”

Gaetz denies that he has dated minors, although I think we’ll just let the DOJ be the judge of that. This seems likely to be the woman he reminded Tucker Carlson that he’d brought to dinner once during their incredibly weird interview, although it’s not clear why he would voluntarily bring up the fact that he dated a very young woman, which is not a crime, in response to allegations that he dated/slept with/trafficked a minor, which very much is.

Also, even if Gaetz is telling the truth and he didn’t start dating that college student until she was over the age of consent, maybe 18 or 20, he would have been 36 in 2018. I’ll just leave that fact there without comment.

It also doesn’t appear that that was Gaetz’s only involvement with an intern. A state representative from their shared state of Florida accused him of having “created a game where members of the FL House got ‘points’ for sleeping with aides, interns, lobbyists, and married legislators.” He made that accusation over a year ago, by the way, so this isn’t new.

And you created a game where members of the FL House got “points” for sleeping with aides, interns, lobbyists, and married legislators. Hope DC is treating you well, Comgressman. https://t.co/PGFuQHJbEJ

In fact, the “game” was first reported all the way back in 2013, when Gaetz was a member of the Florida House of Representatives. Politico’s Marc Caputo, then working for the Miami Herald, tweeted about the “game”:

It’s also come out that Gaetz allegedly has a habit of showing his colleagues in Congress nude pictures and videos of women he has slept with and talking about having sex with them, even doing so on the House floor. Sources told CNN that the photos and videos were “a point of pride” for Gaetz.

While those allegations of absolutely disgusting behavior aren’t part of the DOJ’s investigation, they do paint a picture of Gaetz as someone for whom this kind of investigation is unsurprising.

The Daily Beast writes, “One former GOP staffer said Wednesday that their office had an informal rule to not allow their member to appear next to Gaetz during TV hits, fearful of the inevitable scandal that would come out one day.”