Or you could just buy it off of Amazon.ca. What's the website for that? 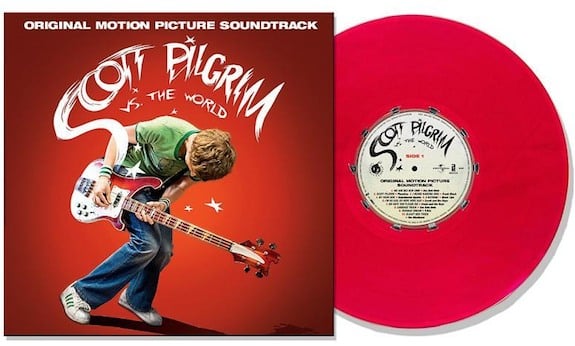 After years of being ridiculously hard to find, the vinyl LP for the Scott Pilgrim Vs. The World soundtrack is being repressed. Thanks to our friends over at ABKCO Records, we’re giving away five copies of the album. And how are we going to pick who gets one? With a Battle of the Bands! Err, Battle of the Band names, that is.

As we’ve covered in the past, the Scott Pilgrim Vs. The World OST is a highly covetable red vinyl album that hasn’t been readily available for years — up until last month when it was repressed. It features music by Metric, Beck, Plumtree, and The Rolling Stones, and Broken Social Scene as well as in-movie bands like Crash and the Boys and Sex Bo-Bomb.

We’ll set up a post on our Geekosystem Facebook page, and all you have to do is comment on the post with what you would call your band if you were a part of the Scott Pilgrim universe. Of course, since video games tie-ins are big in both the graphic novels and the movie  — Sex Bo-Bomb, The Clash At Demonhead, Crash and the Boys, Sonic and Knuckles, Kid Chameleon, etc.  — your band name has to have some kind of gaming reference in it. The more obscure and awesome-sounding, the better.

Oh, and you have to like us on Facebook, too, of course. You should do that anyway. And It would also be really cool if you went over to ABKCO Records Facebook and liked them too, or if you went over to the their website  and signed up for their newsletter, so maybe they’ll want to keep hooking us up with awesome giveaway opportunities. Thanks to them for setting this up for us in the first place!

You have until midnight on Thursday, October 31st, to submit your band, and we’ll pick our favorites the next day. Or you could also just give up and buy the vinyl from Soundstage Direct, but where’s the fun in that?