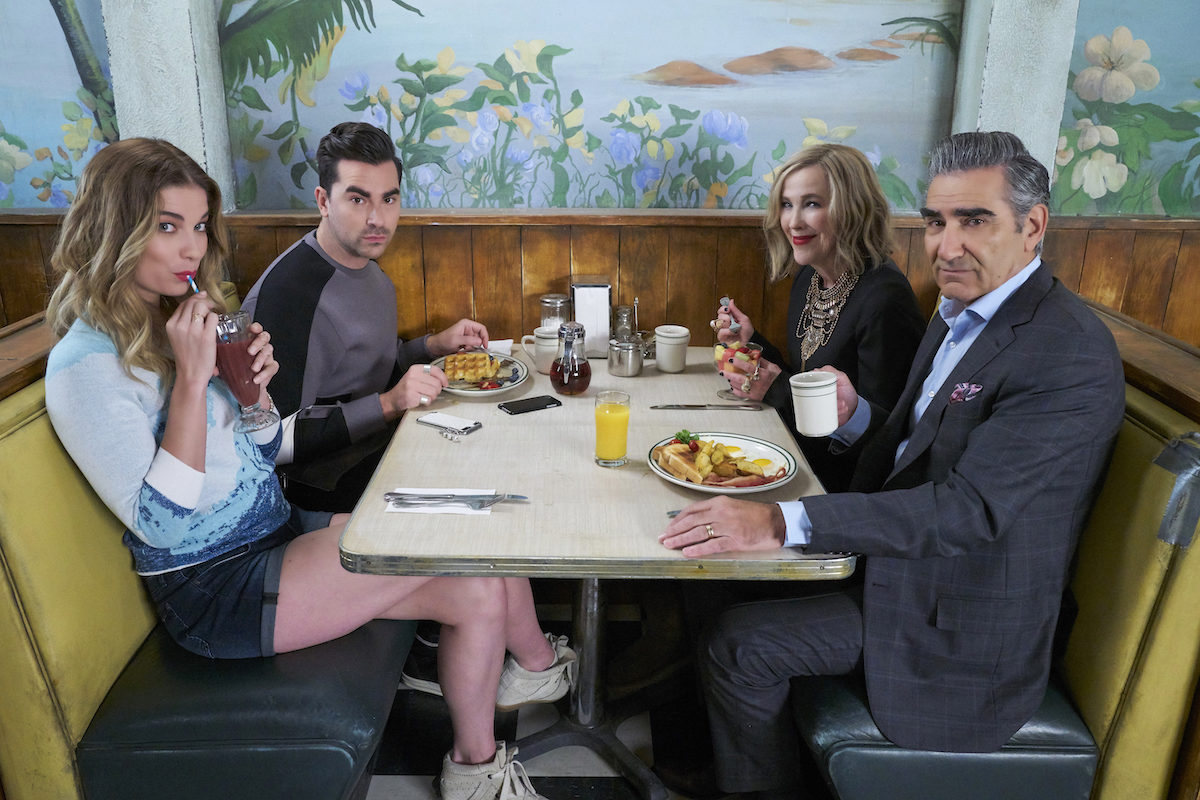 As far as Emmy nominations go, today’s announcements were unusually exciting. Typically, it’s more fun (and cathartic) to focus on the many snubs on display from the Television Academy.

I’m so keyed up to be mad about Keri Russell not winning Emmys that I was briefly mad she was snubbed this year before remembering the show is OVER.

Yes, there were still some egregious snubs (like the entire transgender cast of Pose) but there’s also so much to celebrate this year. Ava DuVernay’s When They See Us got an incredible sixteen nominations. Phoebe Waller-Bridge’s Fleabag got 11, including one for every actress on the show. So many great shows were nominated, but there’s one that’s particularly exciting because while production just ended on its sixth and final season, it had never gotten the attention of the Television Academy until now.

So a big congratulations to Schitt’s Creek on its four nominations!

In case you still haven’t joined this party, Schitt’s Creek centers on the formerly wealthy Rose family, who, after suddenly going bankrupt, have to move to their one remaining asset: the town of Schitt’s Creek, which Johnny Rose once bought as a joke and now not even the U.S. government wants to take off their hands.

I’ve heard a lot of people say they were turned off by the apparent “meanness” of the characters and yes, they are selfish, narcissistic, and elitist. But personally, what I love about the show is how dramatically these characters get to grow and evolve over the course of each season, and also that given their extreme self-centeredness, their bonds with each other (and when they’re able to form bonds outside the family) feel so special.

It’s truly remarkable that a show centered on such (at least initially) self-centered characters really is, at its core, about kindness. In that way, its Canadianness really shines through.

The show has gotten a lot of much-deserved attention recently for its LGBTQ+ representation. David (played by the show’s creator Dan Levy) is one of the few pansexual male characters on television. In Schitt’s Creek, Levy created a small, rural town free from homophobic bigotry–that’s just not a story he wanted to explore. Even David’s partner, Patrick, got a coming-out story that may not have been free from anxiety, but it was without homophobia.

The show got nominations for Outstanding Comedy Series as well as for contemporary costume design, which is honestly so deserved.

.@SchittsCreek‘s Catherine O’Hara on the power of wigs: “The wig is like a helmet… It keeps me where I belong and where I plan to be getting back to soon” https://t.co/GqyykS9aTL pic.twitter.com/3W4y1PtJKG

yes we DO have questions about Moira wearing a wig as a hat#SchittsCreek pic.twitter.com/Vu5a1YTMhW

Eugene Levy (Dan’s father and the show’s co-creator) and Catherine O’Hara both received individual awards for Outstanding Lead Actor & Actress in a Comedy Series for their roles as Johnny and Moira Rose. I’m so happy for them, even though there are clearly so many other cast members who also deserve nominations.

I was, Alexis! (Among others.)

But, as Moira reminds us, this is a big win for the whole team.

I know a lot of people don’t see the point of awards, but they can go a long way towards increasing the chances that your favorite shows stay on the air (not in this case, as the final season has already wrapped) and that your favorite creators and artists continue to find work. Awards also go a long way to establishing a zeitgeist and Schitt’s Creek is most definitely the kind of show I want future generations looking back on as being representative of our tastes and values.

That said, while the Emmys are certainly a big deal, they’re not trend-setters by any means. I’m so glad that this show is getting its due before it’s off the air and it’s too late, but the Television Academy is a few dozen Canadian awards, an MTV Movie & TV Award, and a Television Critics Association Award behind.