Remove App Can Remove Photobombers From Your Pictures | The Mary Sue

Scalado’s Remove App Can Remove Photobombers From Your Pictures 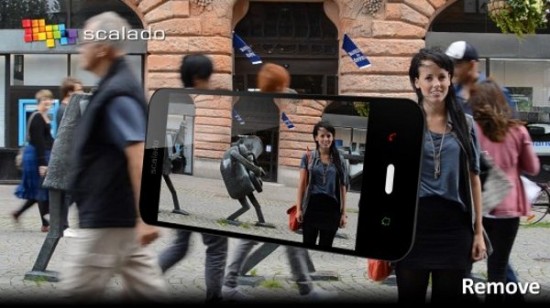 One of the hardest parts of taking photos in public — aside from the eternal shame of looking like a filthy tourist — is all the people who tend to be out in public, going about their own business: The business of getting in your way. Best case scenario is that they take pains to avoid you, the filthy smartphone-camera-wielding tourist, and then you feel self-conscious about it. Well, no more. Remove, a Scalado app, can actually remove bothersome interlopers from your photos. It won’t assuage your social awkwardness, but it’ll leave you with souvenir pictures that reflect a perfect photo-op that never actually existed.

So how does it work? Unlike Photoshop’s new content-aware tools that use all kinds of crazy, proprietary algorithms, Remove uses good old fashioned trickery. Instead of taking one picture, Remove shoots burst fire. Afterwards, it takes stock of what objects in the series of shots are moving — this is its criteria for spotting unwanteds — and isolates them for removal, at which point you can go ahead and make them disappear. Remove will then piece together a composite shot in which the background is fully intact.

The app isn’t out yet, but it’s slated to be shown at Mobile World Congress toward the end of the month. If the prototype actually works, which I have to imagine it will, this app is bound to be on the fast track to mobile photography history, right up there with the ones that slap weird filters on things and let you pretend to be artsy. It just goes to show you that in these days of ever increasing processing power and storage space, there’s definitely a lot to be gained from the good old-fashioned practice of being clever. It’s like editing your photo’s with Occam’s razor.