Of course they're acquainted. How else could Santa get to all the kids in one night? 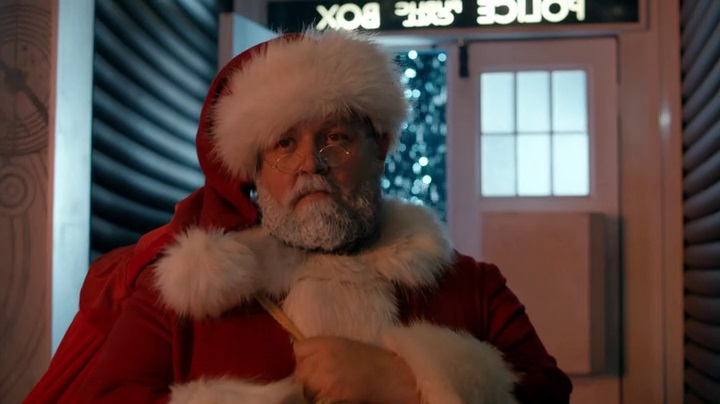 Guest star Nick Frost and showrunner Steven Moffat have some things to say about Santa’s tenuous relationship with the Doctor in this year’s Doctor Who Christmas special. But where’s the beef?

Talking to Radio Times, Frost gave a little insight into what kind of Santa we can expect to see in the world of Doctor Who. He said,

For a start, it’s not all ‘Ho ho ho.’ My Santa is cross, mean, and curt as well as cheery and funny. He’s got a little bit of Robert De Niro in Mean Streets. And he has history with the Doctor: it’s not talked about explicitly but they have beef with each other from a way back.

Santa is like Robert De Niro from Mean Streets? Does he owe the Doctor money for using the TARDIS to deliver Christmas presents or something? Or maybe Santa’s “beef” is, “I’m supposed to be the immortal being that brings joy to the people of Earth on Christmas. Get out of my territory!

But Moffat promised this won’t be a “jump the shark” moment for Doctor Who, and Santa will be put into the series’ universe in a way that makes sense for the show. He told Radio Times,

I haven’t completely lost my marbles here. Santa is written in properly, in a science-fiction way into Doctor Who. I sense that the very people who think they might hate this, won’t hate it at all. Of all the Christmas specials I’ve done, it’s the one most like the paradigm Doctor Who episode.

Wait. Hold the phone. I know why they’re pissed at each other and how Santa fits into Doctor Who! The Doctor is Santa, and it’s two regenerations getting mad at each other for meddling.