Samus, Writing Reflexively, and Finding My Voice | The Mary Sue

On Samus, Writing Reflexively, and Finding My Voice 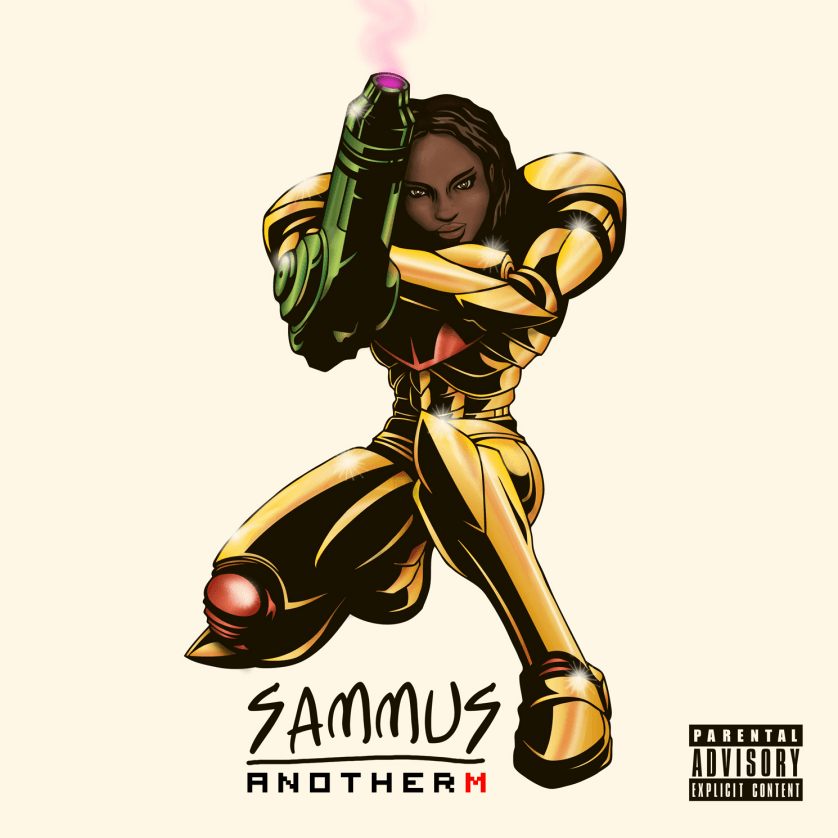 [Editor’s Note: This piece was originally published on Black Girl Nerds. It has been republished here with permission.]

What can be said about Samus Aran that hasn’t already been written,theorized, sung, or shredded?

This was the question I asked myself when Ryan Fitzpatrick of Platinumfungi (Kotaku, Joystiq) approached me about possibly writing a piece for an anniversary celebration honoring the classic video game heroine on August 15th. For those unfamiliar with Samus, she is the protagonist of Nintendo’s revered Metroid franchise, and the first playable female character I ever encountered. In the original Nintendo game Samus traverses the planet Zebes in a full-body armor suit, wielding an arm cannon to square off against the evil Mother Brain. Upon defeating the boss, Samus’ identity is revealed (without explicit mention of her status as a woman), a revelation etched so deeply into my mind that when I began rapping and producing, I adopted the moniker Sammus and eventually began sporting a 3-D printed arm cannon at many of my live shows. In March of this year I even planned a tour with rapper Mega Ran based on our shared affinity for video game characters with arm-cannons, a tour that was sponsored in part by Platinumfungi. 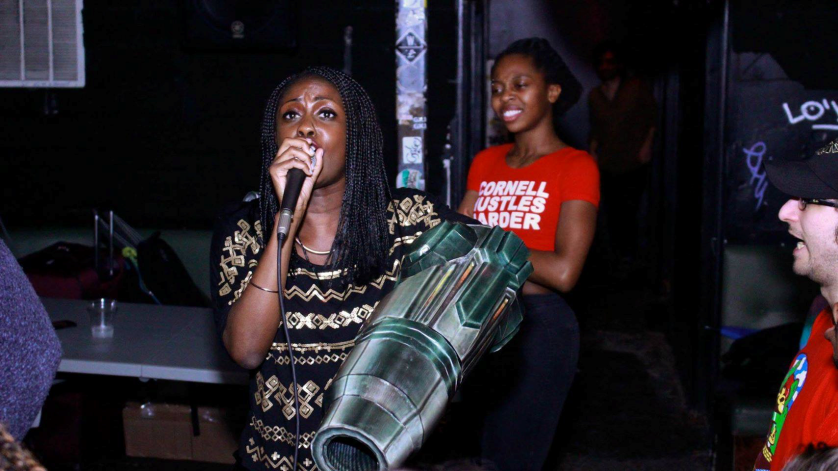 My involvement in Platinumfungi’s #MetroidCelebration therefore felt like a natural fit; I told Ryan that I would be more than happy to write something about my namesake. Yet every time I sat down at my computer, I drew a blank. I had spent the past year riding the success of a Kickstarter-funded Metroid concept EP devoted to telling Samus’ story. What more could I possibly say?

As I tried to conjure up important ideas and themes that I may have overlooked in my retelling of Metroid, I eventually realized that the story of how the EP came to be could itself offer insights regarding the power of Samus Aran. Throughout the experience of drafting the project I was forced to ask myself who I felt she really was, and how I was going to represent that woman across beats and rhymes. And in the process of asking these questions, I discovered not only who I am as an artist, but more importantly why my voice matters.

When I first began working on my Metroid EP at the end of 2013, my persistent anxiety had hit an all-time high. I was floundering in my PhD program, stressed by a failing relationship with my significant other, terrified about starting a new job, and dissatisfied with the trajectory of my music career. After lengthy conversations with respected colleagues, I decided that I would use Kickstarter as a platform to grow my fanbase and release my biggest project to date. For a year I had been toying with the idea of creating a Metroid EP and the timing finally felt right.

But even after planning out all of the painstaking details of the project, it still took several months for me to work up the nerve to launch the campaign, paralyzed by a fear of public failure and an even bigger fear of success. What if nobody contributes to the project? Or worse, what if the campaign really blows up? How am I going to manage everybody’s expectations? My head throbbed at the thought of the Nerd Rage I would undoubtedly ignite when Metroid purists happened across my black-American retelling of the story. I was hip to how these things generally played out. Although Samus’ racial identity is not made explicit (her skin is actually an interesting shade of light lavender in her original unsuited playable form), later iterations of Samus clearly present her as a white woman with long flowing blond hair. As the funding rolled in, I tried to steel myself for imminent geek hysteria. 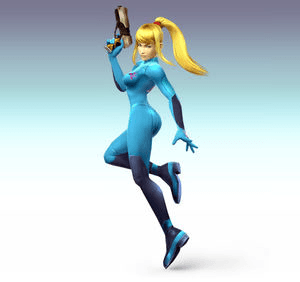 The campaign ended successfully towards the end of December and I immediately began working on the album’s beats. Amidst my ongoing battles with anxiety, I managed to complete all of the production in the week following the new-year. However as January progressed and a busy semester loomed ahead, I still had not written any bars that I felt particularly good about. Each day I tried to write, and each day I produced nothing of value. Cloaked in the darkness of upstate NY winter and unable to make my words do what I wanted them to do, I began to feel hopeless. I had promised everybody that the album would be completed by January – February at the latest – but it was becoming clear that I was going to miss these projections by a long shot. In an attempt to insulate myself from embarrassment, I removed myself from social media, appearing sparingly to provide brief updates about my progress.

Where I stumbled the most was in my approach towards representingMetroid’s plot and aesthetics. Did it make sense to discuss the game chronologically, devoting each song to a different stage? Would it make more sense to focus each song on one of the many power-ups that Samus acquires throughout the game? Should I just expand on the abstract themes addressed by the game and try to create a more universally relatable project? Metroid has always been so compelling to me in part because it feels more like a puzzle, than a standard side-scroller. In that regard, an EP that simply chronicled the different stages of the game did not seem particularly thoughtful. At the same time, a project focused exclusively on the themes of the game would not do justice to the intricacies of its presentation and progression. After considerable deliberation, I decided to stop thinking about Samus altogether. Instead I turned inward and asked myself, “What are the issues that are important in my life?”

“Power-Ups” was the first track I completed in this way – a song about the many skills acquired by Samus over the course of the game. In the midst of my uncertainty about my life, I found relief in waxing poetical about being unstoppable. Flexing my rap skills to discuss the prowess of my namesake reflexively began to empower me. Though I had not finished any other tracks, I decided to release the song on Soundcloud immediately upon its completion. I recall holding my breath, waiting, and then exhaling as praise and excitement began to populate the timeline of the song. Instead of receiving angry messages about delays or judgment from hip hop purists about my use of a trap-style beat, I received powerful affirmations from longtime supporters and a few new fans.

The positive reception armed me with the confidence to move forward with the rest of the project. Even though it was difficult to find extra time and energy, I pieced the project together slowly by asking myself what was important to me and reflecting these concerns in Samus’ story. I recall staying up late one night writing “Cybernetic Armor,” an introspective track about Samus’ past, but more broadly about feeling perpetually out of place and alone; “Brinstar” addressed the absurdity of the planet on which Samus finds herself, a song that was largely inspired by the absurdity I found in navigating life in the academy; “Mae Jemison,” a track named after the first Black female astronaut, highlighted the necessity of drawing on inner strength when being called to save the day. It was that same kind of intestinal fortitude that I tried to summon on most days just to leave the house that semester.

By the time I had finished writing and recording all the tracks for the EP, it was May. The long winter was finally over, but I couldn’t shake my deep sense of sadness. There was no way that anybody would continue to support me after my broken promises and the subsequent litany of excuses regarding their undelivered Kickstarter perks. My hands shook as I typed an apology-laden message to my backers and sent them their respective download codes to the album.

Several minutes passed before my phone began to chime and vibrate. I hesitantly glanced at my notifications, as my chest tightened. The words “absolute masterpiece” flashed across my screen and within moments a continuous stream of warm tears were trickling down my cheeks. I could not believe the excitement and love that began to flood my timeline. And as the next days and weeks and even months progressed, the positive affirmations from my supporters multiplied. Not even a four-month delay could shatter their faith in me.

When I was navigating that lonely upstate NY winter and trying to make sense of my world, I could never have imagined the wonderful places that this project has since taken me. I had been preparing myself for my supporters who had never touched a Nintendo controller to throw up their hands in confusion and walk away. Many supporters had often told me that I was “bigger” than the video game music scene to which some felt that I was pandering. I had also been prepared to receive backlash from Metroid lovers raised on a different perception of Samus than the woman I was presenting. The woman that I conjured up was both a bounty hunter and a social theorist. She was just as well versed in discussing her finesse with an arm cannon as she was in highlighting the insidiousness of cultural appropriation in the context of Miley Cyrus. Much to my surprise, people seemed to love my version of Samus as much as they’d loved her in her silent sprite form.

Since I released Another M last year, the sales and thank-you notes have never let up – Every single day I receive messages of love and excitement from people of color, gamers, feminists, hip hop heads, activists and all of the above. Listeners who learned about me through their passion forMetroid, are now purchasing my first and second albums, projects that have nothing to do with Samus Aran and instead have everything to do with a Congolese Ivorian girl from upstate NY. People who never had an interest in anything related to video games, afrofuturism, or sci-fi now prominently display images of a space-bound bounty hunter rocking an arm cannon on their computers and clothes.

Through telling Samus’ story I have received support from important cultural critics like Jamie Broadnax of Black Girl Nerds and Son of Baldwin, as well as outlets like Okayafrica, The Mary Sue, Bitch, and the Austin Chronicle. I discovered that transcendent music occurs when an artist approaches her subject matter reflexively and accepts that her perspective can be an asset, even in telling someone else’s story. And most importantly I learned that whether I’m speaking as Samus or Sammus, my voice matters – a message that is so necessary to hear at a time when some lives seem to matter so much more than others.

Enongo Lumumba-Kasongo aka SAMMUS is a producer, rapper, and PhD candidate in Science & Technology Studies at Cornell University. Articles she has written have appeared in such notable online publications as For Harriet and Bitch. To participate in the #MetroidCelebration on August 15th, share your Metroid memories, art, stories, and trivia via Facebook and Twitter using the hashtag #MetroidCelebration. Doing so automatically enters you in the running to win a variety of Metroid themed prizes including CDs, T-shirts, posters, cosplayable props, and more! Follow Sammus on Twitter @SammusMusic.