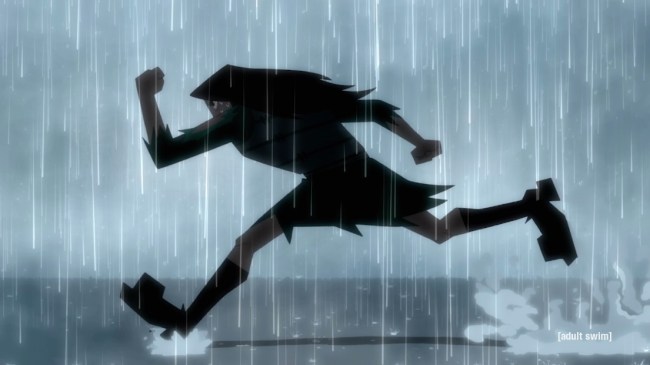 Last week, we were treated to a brand new Samurai Jack season 5 trailer, which was just packed with brand new footage that just enough angst to really get fans going. Now, we’ve got even more snippets of season 5 footage thanks to this behind-the-scenes featurette with Genndy Tartakovsky and series composer Tyler Bates. In the video, they discuss how crucial sound and music are to ensuring strong emotional resonance (sorry) with the story in general.

The show—and animation in general—has come a long way since it was last on television, which was way back in 2004. It’s been 13 long years, and Tartakovsky’s style has certain evolved since then. Even a simple look at the season 5 trailer reveals a much, much more angsty, heavy Samurai Jack. It’s well worth noting, though, that the original series didn’t shy away from serious subject matter, and certainly pushed storytelling boundaries.

But it’s especially nice to know that this season will continue that trend, and that Tartakovsky is still committed to exploring brand new ways of telling a story while at the same time saying goodbye to one of his most legendary creations. After all, this season will be the last we’ll see of Samurai Jack—his story was left hanging back in 2004 with no discernible closure as to the series’ main storyline.

Check out the official description of this season, too:

It’s been 50 years since we saw Samurai Jack and time has not been kind to him. Aku has destroyed every time portal and Jack has stopped aging, a side effect of time travel. It seems he is cursed to just roam the land for all eternity.

Dang. One way or another, it’ll be a season to remember, that’s for sure.