It’s final battle week, more or less, which in Sailor Moon terms usually means things are going to happen SuperSwiftly, and these episodes do not disappoint. Villains rise and fall, characters learn when to let go and when to hang on, and the Power of Dreams! leads to a finale both heartfelt and cheesy. I’m still trying to decide how well it worked for me personally, so let’s hit those recaps and see if we can’t parse it out together.

After a quick check-in with Mamoru (yep—still dying), we pop back into the past for an Amazoness Quartet flashback. They were just four kids playing in the forest when they stumbled upon the mirror where Nehelenia was trapped. To thank them, she gave them power (the Amazon Stones) that would “let their fun dreams go on forever.” And the rest is static, never-changing history.

In the present day, the Quartet are still trapped, Zirconia is still after the Moonies, and Nehelenia still wants that danged Golden Crystal. She blasts Chibiusa’s Mirror out of her (ouch) and threatens to destroy it if Helios doesn’t show himself. He does as she commands, though not before delivering some serious Alicorn stank-eye. 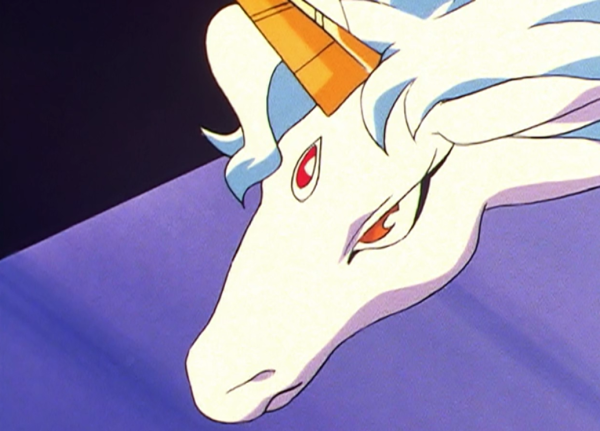 You’ve never been truly judged ’til you’ve been judged by a Pegasus.

Helios reunites his spirit with his body, allowing he and Chibs to hold soooo many hands, at least until some jealous villain ruins it. Nehelenia trusses them up, gets all creepy stalker with Helios, and I … have a hard time caring, to be honest. Maybe if Helios had been more expressive or displayed more personality before now, but he’s basically just been Chibiusa’s Dear Abby column for the last 30-odd episodes, so there’s not much here for me to hold on to, I guess.

Rather than dwelling, let’s hop over to something I do care about: The Moonies in their battle against Zirconia! Our Dead Moon Ringleader loves herself some elaborate traps, so she gets all Shadow Clone Technique on them to try and rile them up.

It works for approximately 60 seconds, which is how long it takes Ami to find the real Zirconia and rhapsody the crap out of her (ScienceBards, FTW!). Sensing defeat, Zirconia begs Nehelenia for help, so she dumps the Amazoness Quartet out of MirrorJail and into Zirconia’s lap, where she proceeds to suck them of their energy and increase her own power. Yo, Nehelenia, a little help for your best gal pals, here?

But alas, turns out she was just using the Quartet’s “innocent energy” to power the Dead Moon, and now that she’s got Helios she doesn’t need them anymore. The Quartet are none-too-happy about this, but they’re reluctant to break the Amazon Stones to free themselves from Zirconia’s energy-suck, because it means they’ll lose their magic and have to grow up. To which Sailor Moon responds by reminding them of this season’s moral: 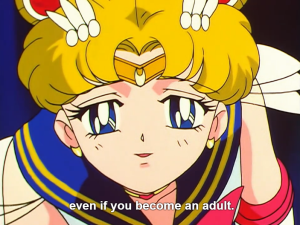 And the Quartet are like “Eh, adulthood can’t be worse than being betrayed, electrocuted, and slowly drained of our energy” (well, that last one will be true no matter what they do, but adulthood is reasonably free of betrayals and electrocutions, at least). So they smash their Stones, force Zirconia to retreat, and even point the Moonies to her lair! Yeahhh, redemption arcs! I always knew you had it in you, kids!

The Moonies never were very punctual, though. By the time they reach Zirconia’s room, three very bad things have happened: Nehelenia has ripped the Golden Crystal from Helios’s horn (ouch), cursed Chibiusa with eternal slumber, and forced her way through the mirror and back into our world, murdering Zirconia along the way (these villains just have NO sense of gratitude). The seal is broken, the eclipse is complete, and the world is covered in big tops. I hope you like circuses, Juuban!

Golden Crystal in hand, Nehelenia’s taken to calling herself the “true Moon Queen” and demanding that the Moonies KNEEL BEFORE ZOD. Give you three guesses how that goes for her. Problem is, the Golden Crystal works both for people with beautiful dreams and people who are super freaking evil (pretty serious design flaw, that), so the scouts’s attacks (even their Sailor Planet Attack!) can’t even touch her.

Reckon that makes this a good time to check in with Mamoru (yep—still dying), as Helios takes his psyche on an LED-fueled trip to Dreamland … and the past! See, Elysion used to be (part of?) the Golden Kingdom, and Helios’s temple was under Endymion’s protection, at least until the gardening staff let it get overrun with black roses. 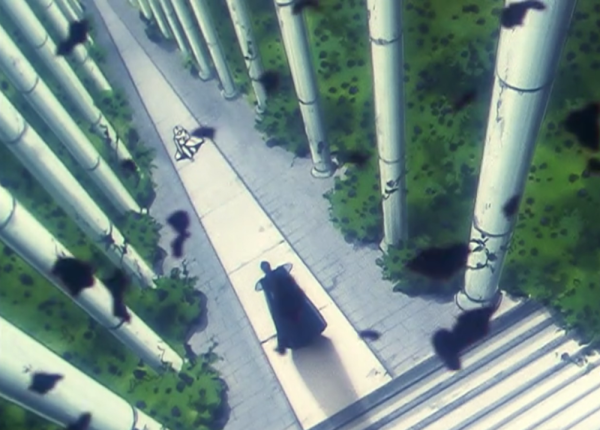 You had ONE job!

I’m not totally clear on how this works, but it seems like, after the fall of the Golden Kingdom, the people of Elyison (Helios included) retreated to a different realm to keep the Dead Moon sealed and watch over the dreams of earth. And speaking of having one job, Helios mucked his up but good. He apologizes to “Endymion,” certain that Nehelenia will make it so that NO ONE on earth will have the power to dream anymore.

To which Mamoru responds: “PFFT, don’t be so melodramatic.” Okay, actually he responds with a speech about how dreams are “a flower of hope,” complete with red rose imagery, and it’s cheesy as all get-out. But his point is an important one: The very definition of a “beautiful dream” is something “you can’t throw away no matter how hard you try,” so no matter how bleak things get, there will always be people who dream of something more.

With some gentle pushing from King Tux, Helios realizes that his dream is to protect dreams, and vows to keep fighting. So he hops back over to the circus easy as pie and pours the rest of his power into Chibiusa (via a kiss, of course, sigh), awakening her from her slumber! But Nehelenia ain’t worried, for even if you DID break her curse, NONE can stand up to the might of her golden … pineapple?

Surprise! The Amazoness Quartet used their circus-born agility and original (limited) magic to steal the Golden Crystal from Nehelenia and give it to Sailor Moon! But the strength of Usagi’s beautiful dreams isn’t enough to power the finicky thing (serious design flaws, here), so it’s not doing them any good—until Chibiusa decides to turn herself into a giant hologram and ask the people of Juuban to lend the power of their beautiful dreams to the Crystal, too.

And it’s … Okay, so I’m going to date myself a bit here, but I was big into the original Care Bears cartoon as a little kid, and I freaking loved the second movie, which is set at a summer camp and is dark as shit when you’re five years old. At the end of the movie (spoiler alert), one of the kids basically dies (dark. as. shit.), and the only way to save her is for everyone to care SUPER HARD. So the bears and kids are all chanting “I care” again and again, and then one of them looks right at the camera and tells you to do the same, and you can bet your sweet bippy I did, and you can bet your sweet bippy I was chanting “Moon Crisis Power” with all those Juuban citizens, too.

All of which is to say that this spoke to me on a deep, nostalgic level … at first, but began to ring hollow the longer it went on. This is partly because I couldn’t quite get the “this is so corny” voice out of my head, but it’s also because Sailor Moon undercuts its adulthood themes by almost exclusively showing children during the chanting montage. There’s Unazuki (arguably still a kid) and the one teacher with his son, and everyone else is 10 and under. So what does that say about the “beautiful dreams” of grown-ups Sailor Moon has been paying lip service to, then?

Probably it’s not trying to say anything. Probably they just focused on kids because they wanted their target audience to feel like they were the ones saving the world. This season always felt like it was being more exclusively directed at a younger demographic than the previous ones, and this climax pretty well proves that. While there’s nothing wrong with that, it does mean this is the first time the series has made me feel like I didn’t belong in the audience, which may be why this conclusion couldn’t quite resonate with me, despite my nagging nostalgia. Ah, well.

“World-weary adults to the left.”

At any rate, Chibiusa’s request works, and the Moons use their Golden Crystal to attack the darkness. Their Moon Disco Power is off the charts, giving them ample Dream Power to focus into a laser cannon and hit Nehelenia right in her smug face.

And if you want to know how that turned out, you’ll just have to wait for the finale.