I don't think "suffer for your art" is meant to be quite this literal. 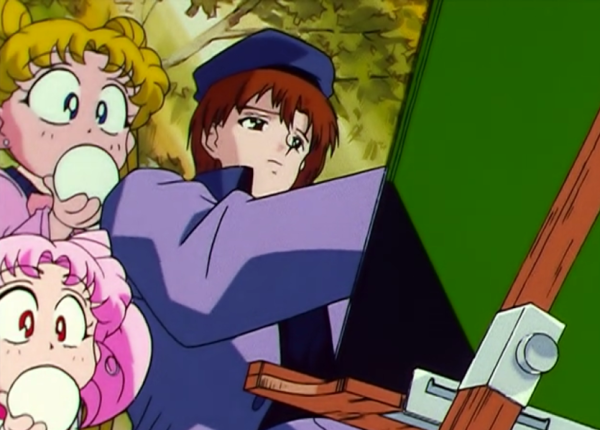 Sometimes, I’m a little sad I didn’t get to experience Sailor Moon as a kid (Li’l Me would’ve loved to have been Sailor Jupiter for Halloween), but I do think watching as an adult has its own unique rewards, as I’m better able to see the kinds of things (largely positive, and sometimes quite progressive) that the series is doing in terms of overarching ideas and thematic messages. Plus, it’s been fascinating to look at the early work of some of my favorite anime directors and see the creators they were and how that influenced the creators they’d become.

That’s particularly true this week, as we see an episode about an artist struggling to follow his dreams while also trying to make ends meet, and it’s hard not to see it as a fictional outburst of frustration from the SM team themselves. It also hits way too close to home for a writer staring at her dwindling twenties and wondering when/if she’s gonna make something of herself. Suffice to say, I had feelings this week, and they were only marginally related to the episodes themselves. So let’s discuss, shall we? 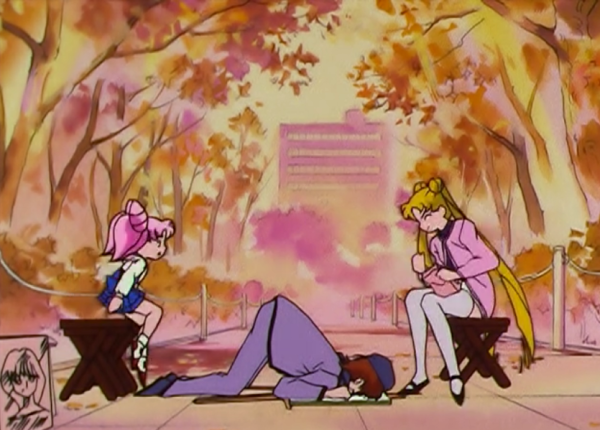 It’s an episode about artists, and you know what that means: Time to read waaaay too deeply into it as a meta-commentary about Sailor Moon’s creative team! I had a commenter tip me off last week that this one might have some subtext to it, and I can very much see where that’s coming from. And that subtext is … kind of a bummer.

Our Dream Target this week is Kamoi, a literally starving artist who paints portraits in the park (accidental alliteration, FTW!). He’s so dedicated to realism and “truth” that nobody likes his work because he won’t paint them pretty enough, and so they refuse to pay him. But instead of chasing them down and stabbing them with a sharpened easel leg, he just keeps on doing work for free. Thus, starving.

Usagi and Chibiusa appreciate his skills and dreams, so they take him home and feed him burned rice, which he ADORES, and seriously, Kamoi has gotta be one of the most adorable one-off characters in Sailor Moon history. 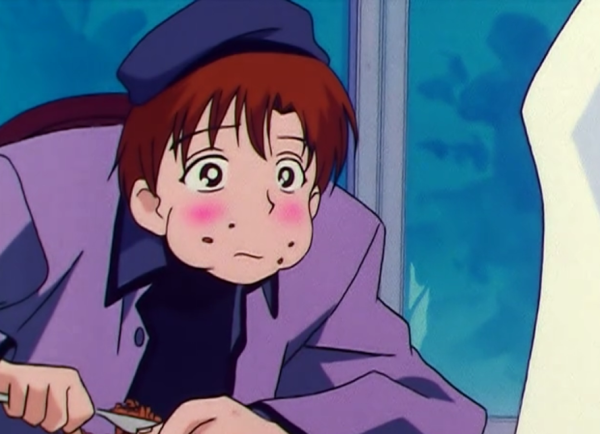 As thanks, he paints Usagi a wonderful portrait (that she also does not appreciate) and provides Chibiusa with some feedback on her own Usagi painting (“I can tell you really love her,” he says, to both Moonies’ embarrassed dismay). Then he’s back on the street to forage for wild onions and fight squirrels for half-eaten crepes.

Except, not so fast! There’s a rich young lady (Cere-Cere in disguise) who wants to support him with his endeavors, just like her “late father” used to do! She takes him back to her mansion (and I know we’re over 150 episodes in and I should know better, but WHOSE? HOW?!) and hires him to paint her. But, as Pegward tells Chibiusa, people’s hearts often distort the truth, and so Cere-Cere insists he do it better, otherwise it’s back to the streets with him!

So Ikuha—I mean, Igara—I MEAN, artist Kamoi decides to sacrifice his integrity for room and board. And I … kind of … don’t … see what the big deal is? Like the entire rest of the episode is about how Kamoi compromised his ideals and so his Mirror is a grimy, dreamless abyss so disgusting not even the Lemures wants to swallow it, but honestly, WHY? It was ONE idealized painting. She paid him to do a job, and he did it to her specifications. That’s. It. And hey, look, now he actually has time to create the art he wants, because he isn’t constantly passing out in the street from hunger!

Episode Director Igarashi: You are going to go on to direct adaptations full of humor and heart enjoyed the world over. Series Director Ikuhara: You will soon create Revolutionary Girl Utena, one of the all-time great masterpieces of anime and dare-I-say fiction in general. And you are both going to do be able to do these things in part because of the work you did for Toei. IT’S OKAY. YOU’RE BOTH GOING TO BE OKAY.

… Er, sorry. I was staring at my boring day job and thinking about how nice it is to have the resources I need to be able to blog about anime in the evenings, even if I don’t have as much time to do it as I’d like, and I, uh, might’ve projected a bit there. Ah-hem. So. Where were we?

Oh, right. The MOONS! They save the day after Cere-Cere knocks out Kamoi’s Dreamless Mirror, and while Chibiusa is worried about his future, Usagi assures her that he’ll get his dream back. And lo, Kamoi awakens and tells the Moons he had a dream about “how painful it is to lie to yourself,” so he returns to the park, where he continues to paint portraits for an ungrateful public until he collapses from exhaustion and dies in a gutter. BUT AT LEAST HE KEPT HIS INTEGRITY, YOU GUYS.

This is a painful episode written by frustrated creatives who do not have an answer for their problems, and I have so been there. But you know, as super(S) depressing as it is when viewed in a vacuum, when seen from the distance of 20 years it’s actually sort of … comforting, I guess. I mean, like I said, Igarashi will do great work for BONES, including Soul Eater and Ouran High, two series all but overflowing with energy and sincerity, and Ikuhara will become an auteur director responsible for some of anime’s most ambitious (albeit polarizing) works.

But right here, in 1996, they’re just two guys in their very early 30s wondering what the hell they’re doing with their lives. I’m not too far from that. I suspect a lot of you readers are near there, too. So take heart, team! We’re not alone. And if it worked out all right for them, well, maybe it’ll work out all right for us, too.

And once again Sailor Moon has managed to get me all fired up and inspired, even if it didn’t mean to. Onwards to the next dream!

Chibiusa and her friends are checking out the local swans when they’re nearly mowed down by some yahoo trying to fly a bike in the middle of a big city. Said yahoo is Hiroki, a kid in the class next to theirs, who dreams of building his own human-powered aircraft. HIS human-powered aircraft, okay? Not YOURS. He doesn’t NEED your help, GAWD!

Yep, it’s another “the power of teamwork” episode, which means it’s a pretty good one. Hiroki has the passion and the skills, but there are some things you’re too close to see on your own, which is why constructive feedback is so important. Everyone (Moonies included) return to see him make another go of it, and once again fall into the river. One wonders where the cops or his parents are to keep him from cracking his head on the cement and drowning, but PSSH, ADULTS, in ANIME? That’s crazy-talk.

Ami offers her technical expertise, the other gals throw in some advice, and Kyusuke’s inspired enough that he stops hassling Hiroki and offers to help him build the new model. Hiroki finally agrees to share his dream to help make it a reality, and a beautiful friendship grows.

In anime-speak, that means she’s already written three slashfics about them!

Okay, to be fair, it’s more like he physically can’t stay with her if she stops believing in him. And he has spent the last 30 episodes helping them fight minions and save dreams, so I guess he’s earned the benefit of the doubt at this point. But Chibs is understandably frustrated by the non-answer (as is your blogger), and the next thing she knows Peg has vanished. Then she yells at Usagi about respecting her privacy, has an “Oh hell THAT’S what he meant about secrets!” moment, and wanders off alone to feel guilty for a while.

This whole “being alone” thing is gonna make it mighty tough on her when Ves-Ves shows up to steal Hiroki’s Dream Mirror, and Chibi Moon’s got nothing but her plastic heart pellets and a cowbell to defend herself against Pao-Pao the flying elephant.

I be done seen ’bout everything now.

The Moonies and Tux show up in the nick of time to remind Chibiusa of the importance of trusting and relying on others, as well as the importance of believing in (and forgiving) oneself, too. Chibs decides to call out to Pegward, trusting that he’ll hear her and GOOD GRAVY, I’m sorry you guys, but my cat just flapped his tail on the keyboard, I am literally typing through fur right now. This is ridiculous. I need a minute to move (and feed) the fluff.

Licking his lips in anticipation of the dinner he knows is coming.

Okay. SORRY. We were right at the inspirational part and then some hungry punk had to go and ruin the moment. So yeah, Chibiusa believes in Pegward again and he returns, helping Sailor Moon defeat the Lemures and save the day. Even better, Hiroki’s next attempt is a smashing success, as he and Kyusuke take off into the skies.

Cute stuff. Not particularly helpful to the overall story, THANKS FOR NOTHING, PEGWARD, but cute all the same. And a nice bit of sugar after the vinegar that came before. I’ll take it.

Now, where did that plot run off to again … ?