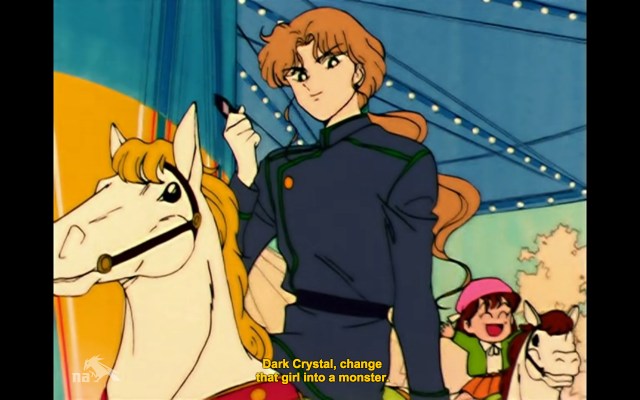 Why is Zoisite on a carousel? HE HAS HIS REASONS.

On Earth, Luna’s feline, video-game-communicating overlords order her to drop an info bomb on the Senshi: she’s from the Moon, and the princess they’re all looking for is Moon Royalty. The response is a general: “Oh, okay. This really isn’t any weirder than being magical superheroes who only fight monsters sent after us by strange men in marching band uniforms, Luna.” In the Dark Kingdom, Zoisite and Kunzite gloat over the four rainbow crystals they’ve managed to collect, and Kunzite affirms that he can’t wait to give the Legendary Silver Crystal to Queen Beryl. Dang, no schism in the Dark Kingdom.

But that shit is barely what this episode is about. It’s about Naru and Umino GETTING IT. And by it I mean an age-appropriate romantic relationship. Since she got over the death of Nephrite and he saved her from Boxxi The Weirdest Youma Ever So Far, Umino and Naru have been hanging out a lot, but they’re not really dating, much to Umino’s sorrow. Naru confesses to Usagi that Umino’s nice and great at helping her with her homework, but he’s “missing something that would light my fire.”

Usagi thinks she knows exactly what would light that fire and it’s “being more like Tuxedo Mask.” Not a great plan. I mean, to be fair, what Usagi means is that Umino should be more self-confident and show bravery, but all Umino hears is “obsessively protect Naru from all dangers real or perceived.” Aaand, I’m gonna try not to get into a rant on “girls don’t like nice guys” “only alphas make it out of the friendzone” crap. It’s just a kids’ show, Susana. Just a kids’ show.

So, right, Umino resolves to become Tuxedo Umino Mask, which he does by following Naru and Usagi around in a Tuxedo Mask outfit (Naru, exhibiting her magical abilities as the only person in Sailor Moon who does not have face blindness, thankfully does not mistake him for the actual Tuxedo mask) to protect them from barking dogs and from their own free choice to play video games after school. It was cute, Umino, but at the point where you’re “protecting” women from making choices that don’t hurt anybody else, you’ve reached bad boyfriend territory.

Inside the arcade, Motoki tries to pawn off a couple tickets for a live stage show at the local amusement park based on the adventures of the super sentai-style Redman character that he considers himself too old to go see. Usagi browbeats a reluctant Naru into taking the tickets and going to the show as a pity date with Umino. Really, Usagi? Naru’s so not into the idea that Umino has to visit her home in the middle of the night to ask her when he should meet her there, because she hadn’t actually voiced any details.

But it’s a good thing overall, because, in consistent behavior with the “Everyone in Sailor Moon is Faceblind” theory, Zoisite mistakes a dressed-up Umino for the actual Tuxedo Mask and retreats from Naru’s hallway. Why was he in Naru’s hallway? Well, because he’s enhanced the Dark Crystal to transform humans into youma, instead of turning humans with Great Youma inside them into youma, since all the Great Youma have now been banished. 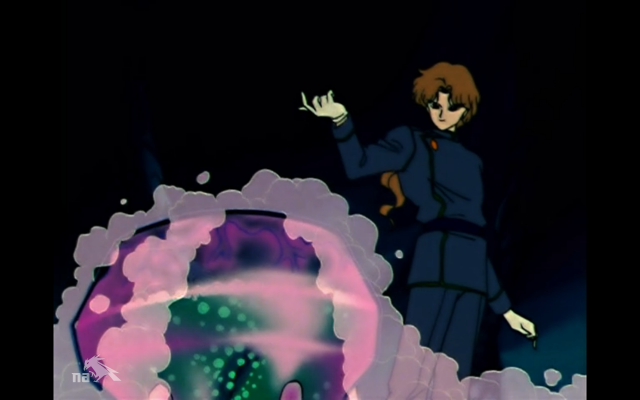 Then he gazes longingly into a portrait of himself and Kunzite and resolves to make Naru Osaka his first victim, since Sailor Moon always seems to show up when she’s in danger. Which is when he meets Tuxedo Umino Mask in the hallway and retreats, because Zoisite has never met a plan that could not be cancelled or postponed at the merest sign of trouble.

The next day, Naru and Umino meet up at the amusement park for their date, with Usagi and Luna trailing along behind, shirking her princess-finding duties to keep an eye on her friends’ love life and watch out for the most wayward Sailor Senshi, respectively. As they settle in to watch Monster Warrior Redman fight a guy in a monster costume, Zoisite puts his plan into action.

Which I guess he’s been riding because he thought it would be an inconspicuous place to be, but secretly I hope it’s because he likes carousels. But the beam of magic that he sends towards Naru misses and instead turns Redman (or perhaps the actor inside the Redman costume) into the youma Akan. Akan traps everybody around in algae balls that restrict and eventually suffocate their prisoners. Except for Naru, who, of course, is under the protection of Tuxedo Umino Mask.

Can I just say that I’m really disappointed that we weren’t treated to Umino dashing behind some bushes and then stumbling out half dressed because he’s non-magical and doesn’t get a transformation sequence?

Yeah, Umino’s real bad a fighting youma. He gets knocked out and Naru gets algae balled anyway, but luckily at that point Usagi’s had time to transform, and when she shows up Zoisite calls a pause on the action. His goal is now accomplished: he just wanted to call Sailor Moon out and demand that she hand over the yellow Rainbow Crystal. If she doesn’t, all the people trapped in Akan’s expanding algae balls will die. Since she has no choice, Usagi hands over the crystal, only to be interrupted by Tuxedo Mask. The actual Tuxedo Mask.

You know, at this point I think I want a supercut of all the times that Tuxedo Mask has knocked something out of Zoisite’s hand. The crystal goes everywhere as Tuxedo Mask attacks Zoisite and Akan attacks Sailor Moon, and inside her algae ball Naru hears the fight and assumes that Umino is kicking everybody’s butt. Greeeat, a relationship based on misconceptions, greeaaaat.

Usagi Moon Healing Escalations Akan, and Zoisite teleports to the Rainbow Crystal and snatches it. This is the first thing that makes Tuxedo Mask look up from where he’s been the whole fight: beating the shit out of Zoisite’s rose petals with his cane. Zoisite laughs at them all and leaves, and then it’s all over but for the predictable stuff. Tuxedo Mask affirms that he’s out for the Rainbow Crystals for himself. Naru tells Umino that he was cool. Everybody assumes the monsters were part of the show. Luna berates Usagi for losing literally the only Rainbow Crystal that the Senshi had, the only thing that could possibly lead them to the Moon Princess. Usagi ignores her and wonders sadly about Tuxedo Mask’s motivations and loyalties.

Well, I guess that answers my question about what’s gonna happen now that all the Great Youma are over. We really are just gonna fight over crystals. Not that I’m complaining. Steven Universe is my jam. Not particularly impressed by Naru and Umino’s relationship, though. Would it kill ’em to let it progress without sitcom shenanigans (SO FAR, she added) like Rei and Yuichiro?

HEY GUESS WHAT NEXT WEEK IS? Sailor V! FINALLY. And since this episode talked a bit about the Moon Princess, lets lay out some facts. Sorry to bust your bubbles, folks, but I know that . And not just because I’ve read the manga, because I am a culturally aware person who uses Tumblr. It’s kind of unavoidable. But if nothing else comes up next week, I’ll talk about how I think the misdirection is really interesting.