Sailor Moon Usagi and Mamoru's Past | The Mary Sue 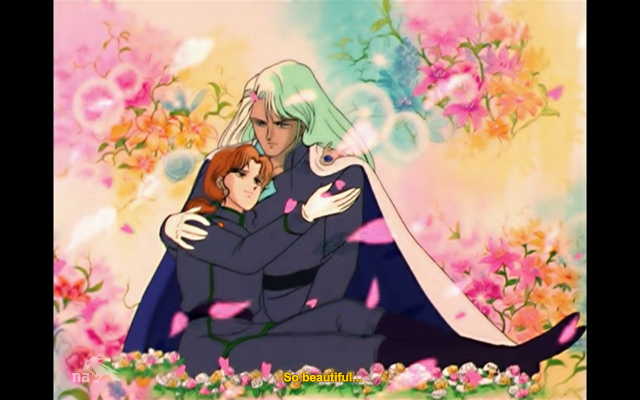 Months ago: Aww, look at this cute screencap of Zoisite and Kunzite bein’ hella gay together.

So naturally we open with some character reactions, as the other Senshi come to terms with the least hidden secret identity since Iron Man and Green Lantern. Sailor Moon is the Moon Princess and Tuxedo Mask is really Mamoru. 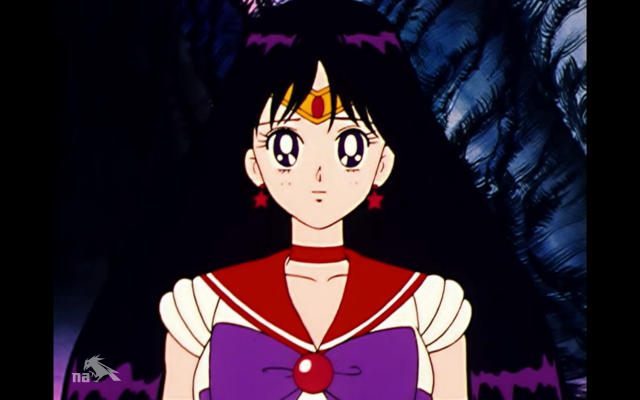 Srsly, Sailor Moon, I expect a real payoff on this emotional situation.

But wait, there’s no time for personal revelations! Zoisite is still like right there! Until he attacks and Usagi blasts the shit out of him with her crystal-upgraded Moon Wand without even looking. Nobody interrupts proper love interest mourning time, and this gives us a minute for some vague exposition, as both Mamoru and Usagi’s memories of their past lives come flooding back. Mamoru remembers that he was Endymion (the name of a Greek mythological figure known for being the beloved of a moon goddess), and Usagi remembers that she was Serenity. Endymion and Serenity were some kind of item until  something bad happened and Endymion went off to fight it and I guess died? It’s vague. There’s a lot fire everywhere and Serenity screaming his name. After this vision of the past, Usagi transforms out of her Princess Serenity duds and back into Sailor Moon, and faints from shock.

Kunzite arrives to pick up his injured boyfriend and teleports out with Zoisite and Mamoru for good measure, leaving the Senshi trapped in the transformed Starlight Tower with his promise to come back for them later. Of course, this means that the Kings of Heaven have to report to Queen Beryl. She sits them down for hot chocolate and cartoons and then Zoisite and Kunzite start the next arc as team villains against all five Sailor Senshi and it’s totally badass.

Actually, infuriated by the extreme incompetence that resulted in a mission to recover the Rainbow Crystals turning into events that caused the awakening of the Moon Princess and the Senshi recovering the Legendary Silver Crystal, not to mention one of the Kings of Heaven disobeying a direct order, Queen Beryl kills Zoisite. He doesn’t even get a crystal prison or anything. 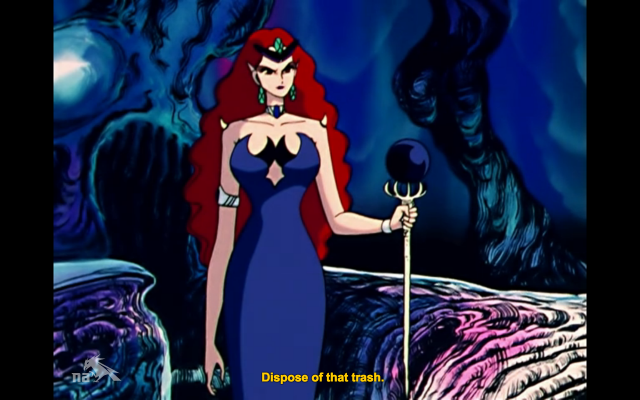 Then she makes Kunzite clean up the body.

Cold, Beryl. Cold. She leaves immediately to tell the Great Ruler, who now finally has a name (Queen Metalia, who I remember thinking was male in the manga, but hey, I also thought Artemis was a girl) about Mamoru/Tuxedo Mask being the reincarnation of the prince of the Kingdom of Earth. The significance of this is unclear, but it does give Kunzite and Zoisite time for a death scene.

Kunzite grants Zoisite’s last wish to “die in a beautiful way” by conjuring a field full of flowers with buckets of his favorite rose petals floating through the air, and with his last breath Zoisite proclaims his romantic love for Kunzite and oh god “Time” from Inception just came on my Spotify as I am typing this I am NOT JOKING 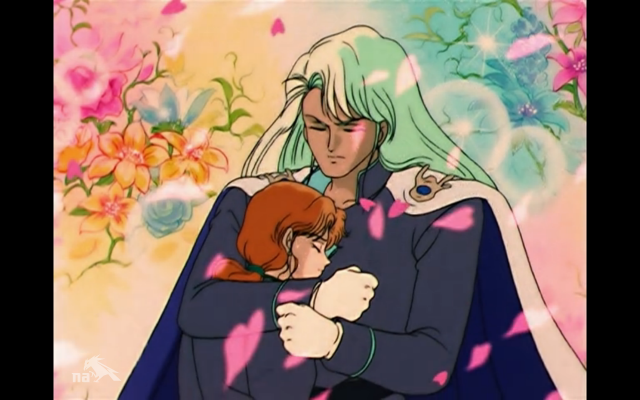 Naturally Kunzite gets up to bring the pain to the person responsible for all of this: NO haha, we’ve still got like eleven episodes left, he goes to fight the Sailor Senshi.

Where are the Senshi? Wandering around trapped in the Starlight Tower as Ami does her best to math them out of “sealed complex projective space [continued single sentence with as much technobabble as Star Trek usually puts in a whole scene].” Ami’s math does give us time for a great big dollop of exposition to give context to all these new revelations.

Once upon a time… 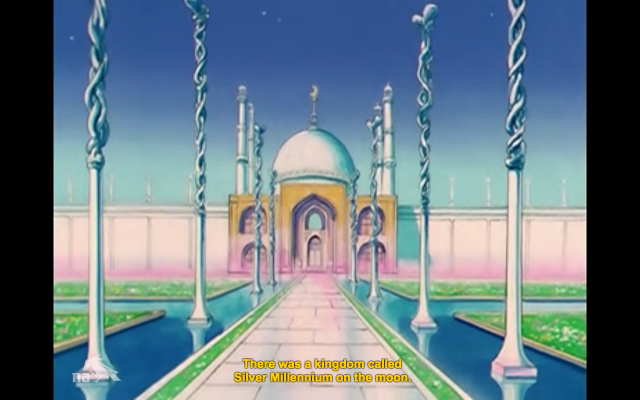 And there was a little princess and she was very sad, for her mother and father—I’ll stop.

Princess Serenity lived there happily with some other woman who had TWO PIGTAILS ON EACH BUN SO OBVY A TOTAL BOSS, until the Earth was taken over by an evil force that went on to attack the Moon Kindom, seeking to gain the power of the Legendary Silver Crystal. Though the kingdom was destroyed, the lady with four pigtails managed to seal away the dark force, and reincarnate the kingdom’s princess and its four guardians as girls born on Earth thousands of years later, so that they might live happily as normal girls. Nobody foresaw that the Dark Kingdom would return and that the Senshi would be needed again in their reincarnation. Now it’s up to our girls to protect the Crystal and defeat the Dark Kingdom. But despite a rousing speech from Sailor Venus, there’s one Senshi who isn’t ready to step up.

Okay, yes, it’s Usagi, but she’s, like, really got righteous reasons to want to not be in the place she’s in, let’s be real. She’s just been told that because of forces beyond her control, it’s her job to save the entire world from a superlatively powerful evil force. That evil force has already probably killed someone she cares about, and now all her friends are going to stand up to it on her behalf. She‘s the Moon Princess they’re all fighting to protect, but she’s just a scared kid who gets bad grades and likes to play video games and eat snacks. Accepting her destiny as the Moon Princes means having to live up to being an inspirational leader worth protecting. It means growing up, which is always scary. 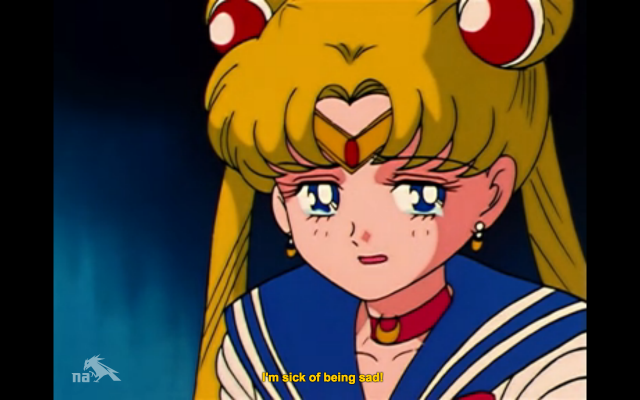 The next thing that happens is Rei smacking her one, furious and tearful that Mamoru may have died to protect “a crybaby like you,” so, why don’t you just rub some salt in those wounds, Sailor Moon. But Ami knows what’s up: Usagi is a Hufflepuff. So she might always freak out when she has time to think about things, but when it comes down to the wire, there’s nobody more loyal.

Speaking of which, Kunzite chooses this moment to reappear and solo throw down with the Senshi. Because they’re still in a Dark Kingdom-y place, none of their attacks work on him, and he makes quick work of Venus and Jupiter, and then Mars, and then even bookwormy little Ami, whose special power isn’t even an offensive one. So you know what time it is now. It’s time for Usagi to step up. 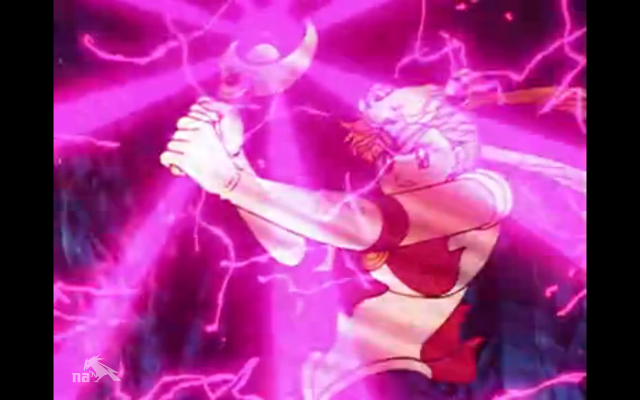 The power of the Legendary Silver Crystal blows the Starlight Tower apart, Kunzite barely escapes with his life, and we hit the denouement. Mamoru is healed with Dark Kingdom magic and held in some kinda magic stasis for reasons that are presumably A) evil, and B) to be revealed later. The Sailor Senshi renew their dedication to fighting alongside each other for the good of the world, and Usagi expresses her belief that Tuxedo Mask must be alive somewhere.

Finally, I think I’m done with the end of this arc, and what an arc. Take my pleased surprise that Sailor Moon changed villains back when we switched from Jadeite to Nephrite, and double it, as the show refuses to slide into its final arc sitting down. Relationship drama! Extra powers! A villain who can effortlessly hand five Senshi their own butts on a platter! Not to mention a whole lot of question answering as to the origins of the Senshi… but maybe not every question. Like what purpose did Luna’s memory loss serve if Artemis got to keep all of his knowledge of Silver Millennium?

And yes, I was kind of raising my hopes that instead of eliminating a villain, this time we’d see two villains together… but I’m interested to see where the show takes a vengeful Kunzite in this next arc.