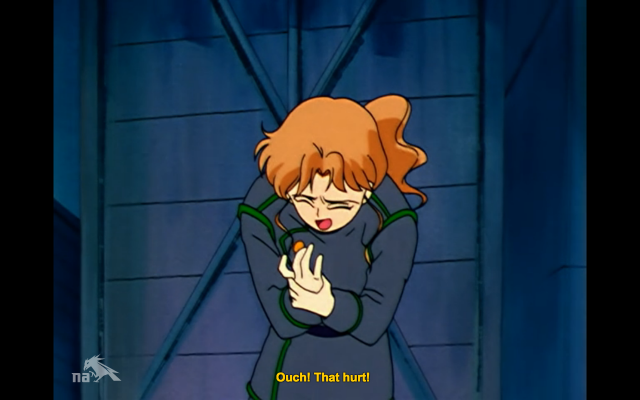 70% of this story arc: somebody smacking Zoisite’s hand.

The good news is that I met Sailor Venus, the bad news is I still know like nothing about her, but the GREAT news is that ZOISITE DRESSED UP AS SAILOR MOON.

Our episode, as is frequent, opens in the Dark Kingdom, where Zoisite still has two Rainbow Crystals to recover. Unfortunately, they’re both in the hands of Tuxedo Mask. Queen Beryl warns him that he’s on his last straw with her, which is kinda harsh. I mean, four out of seven crystals and one recovery is a pretty dang solid record compared to Nephrite and Jadeite, even factoring in the loss of all seven Great Youma. …are we starting a new arc, guys? Is this the last episode with Zoisite? I’M NOT READY TO LET GO.

Zoisite has a new plan for Tuxedo Mask, which is to say it’s the same plan as last episode: find a person that your target always shows up to help, and use them to bait a trap for your quarry. Except there’s a twist: as Tuxedo Mask and the Senshi are the Dark Kingdom’s greatest enemies, Kunzite volunteers to help separate Tuxedo Mask from Sailor Moon. 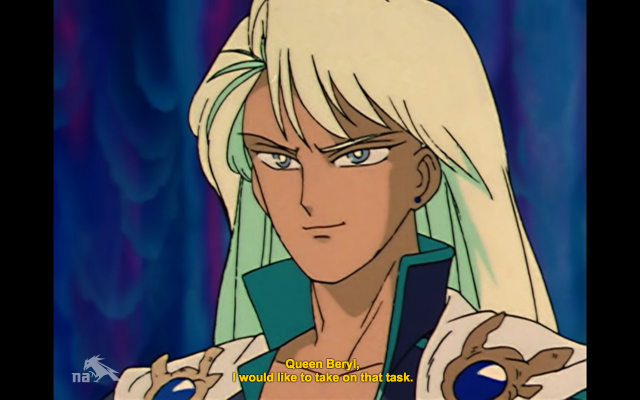 In Tokyo, news outlets are reporting a rash of crimes being stopped by Sailor Moon, and you’d think that the Senshi would be pretty jazzed by that, but not after Makoto and Usagi watch a Sailor Moon look-alike save a couple of window washers. It’s clear that who ever it is isn’t Usagi, and that deserves investigation. She using Usagi’s good name and not even wearing the right colors! Which is honestly unnecessary, it’s not like she and the real Sailor Moon even share a scene in this episode so we’re not going to get them confused.

But the senshi aren’t the only folks after this Sailor Moon impersonator. On hand during the window washer incident, Mamoru notices that the victims were only in danger because someone cut their cables. Would the Sailor Moon he knows have put people in danger just so she could save them and look good? 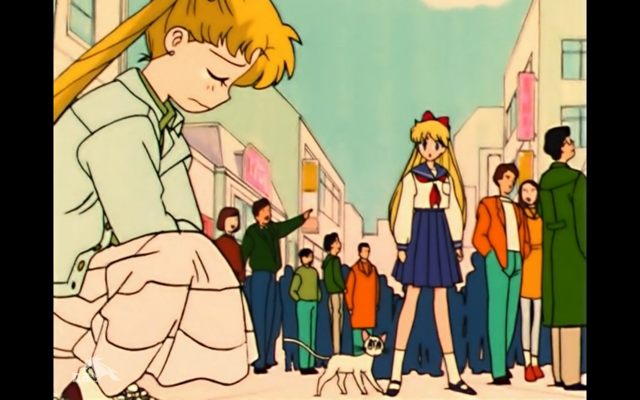 Pay no attention to this strange girl and cat in the background.

Everybody follows fake!Sailor Moon to the docks (you know, the docks, that place where half of superhero stories take place in. The other half take place in the warehouse district), where Kunzite has her strung up on a high crane just as the sky fills with lightning. Gathered together, the Senshi speculate on who she could be. Maybe… she’s a fifth Sailor Senshi? Luna is oddly coy. 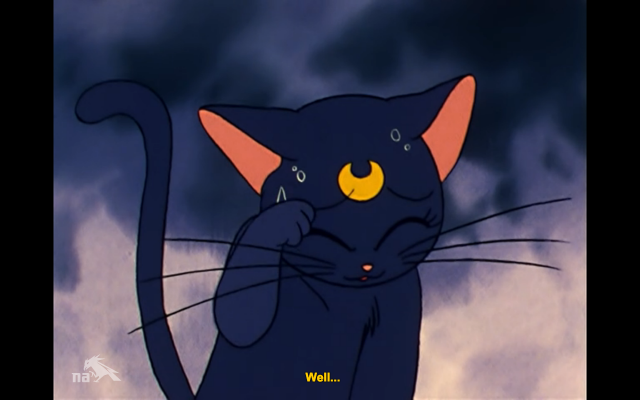 The Senshi are the first to reach fake!Sailor Moon’s site of distress, and even though they know it could be a trap, and even though Usagi’s still pretty peeved that her identity has been stolen, she convinces the Senshi to suit up and get to the rescue. Even if she’s an impostor, she’s still a person in danger, and they can’t ignore that. *sniff* Usagi is the best, guys. They suit up and Usagi gives Kunzite the ultimatum: 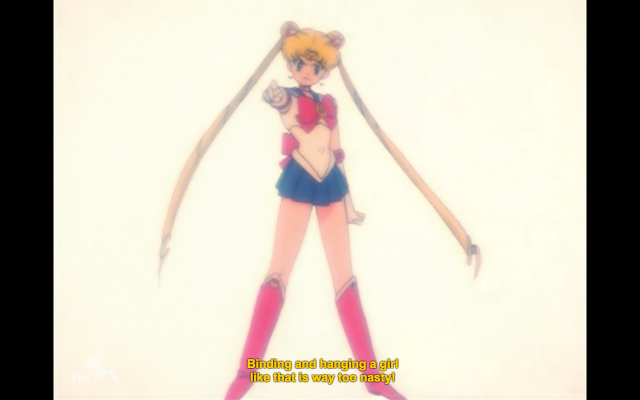 Kunzite introduces himself as the newest, biggest pain in their asses, and then encases all four Senshi in a black dome of evil magic that simply absorbs all of their attacks. Then he starts to make it shrink. But forget them, let’s talk about Tuxedo Mask. Somehow TM is rescuing fake!Sailor Moon from the crane, just before it’s struck by lightning, even though by rights all this Kunzite/Senshi drama should be happening within view. I’m just saying the staging is a little weird.

He carries her into a warehouse, ware-upon she conjures a sharp crystal, stabs him in the shoulder with it, and springs up onto a box to reveal her TRUE FORM. And at this point I admit that I’d kind of forgotten about the Dark Kingdom interlude in the beginning of the episode and just assumed that the part of fake!Sailor Moon was being played by a youma under the orders of Kunzite, but who should appear to my entirely delighted eyes but ZOISITE.

Zoisite. Zoisite dressed up as Sailor Moon in order to lead Tuxedo Mask astray. Let’s consider this for a moment. It’s already been established that everybody in Sailor Moon is faceblind (except Naru), so Zoisite could have just put on his palette Sailor Moon costume without even changing his hair, and fooled everybody (except Naru). But instead, he decided to change his form entirely.

But there’s more to this scene than Zoisite’s inevitable defeat at the hands of a teenage girl. After the King of Heaven follows an increasingly exhausted Tuxedo Mask around the warehouse, taunting him and lashing at him with a crystal shard, he catches him in one of those sword fighting stalemates that only happen in action movies and blows his mask of with a spray of magical flower petals, getting a good look at Tuxedo Mask’s actual face. Queen Beryl, who’s watching the whole thing (through Zoisite’s eyes I guess? Nobody told me Queen Beryl has omnipresence), is clearly shocked to recognize Mamoru from somewhere. PLOT THICKENING.

But before Zoisite can finish Tuxedo Mask off, he is disarmed by a magical attack from a mysterious girl in a sailor suit, and both Tuxedo Mask and the girl disappear before he can do anything about it but throw a hissy. As per usual, he goes to complain about this to Kunzite, whose reaction is calm, but still basically: “Baby, I’m in the middle of singlehandedly crushing the Sailor Senshi to death and you’re here to tell me you lost their biggest supporter. You had ONE JOB, ZOISITE.” In reaction to his mild rebuke, Zoisite tells him to stop being mean and challenges Tuxedo Mask to reveal himself and hand over his Rainbow Crystals, or they’ll kill the Sailor Senshi.

Left with no choice but to surrender, Tuxedo Mask staggers into view, but then who should appear but the same mysterious teenage girl. It’s Sailor V! Or, as she rips off her mask to reveal… a teenage girl dressed entirely the same way but without a mask, Sailor Venus, the fifth Sailor Senshi. Her Crescent Beam attack breaks Kunzite’s hold over the other Senshi. “Sailor V???” Usagi is incredulous, and a white cat with a crescent moon marking springs from the shadows to confirm that yes, she is “the guardian of justice, Sailor V. But her true identity is Sailor Venus.”

True identity. You mean Sailor V was the name you came up with to disguise her identity as Sailor Venus? You just took the last syllable of her name off and thought that was a foolproof plan?

Anyway, this cat is Artemis and I still can’t get over how he’s a dude. You can’t name a character Artemis in a manga and expect me to pick up on the fact that they’re male. I’ve read too much Greek mythology. He and Luna are old buddies and I can’t wait to see how that plays out.

But first we’ve got Dark Kingdom stuff to wrap up. Kunzite and Zoisite are ready to go back on the attack only to have Queen Beryl appear in giant holographic form and order them to retreat. “The situation has changed,” she says, presumably because of something to do with the realization that Mamoru is Tuxedo Mask, and I can’t wait to see how that plays out either. No longer needed, Tuxedo Mask leaves, unnoticed, and we’re left with a full roster of Senshi, together at last. But then the episode ends before we can actually find out anything about Sailor Venus, much less whether she’s the Moon Princess.

I said last week that I might talk about why I think the show’s misdirection around the identity of the Moon Princess is interesting, but since we didn’t actually find that out this week, and I have many burning questions from this episode, I’m going to save that for later. LET’S BURN.

Okay, so what’s the deal with Mamoru/Tuxedo Mask and Queen Beryl? Does she recognize that he’s a reincarnation of somebody else, or is there something else to it? Zoisite didn’t recognize him. Will this actually result in something or is it just me reading red herrings into Sailor Moon where there are none?

Is this the end of Zoisite???? Or are he and Kunzite going to keep teaming up? As much as I appreciate Kunzite’s Akio-like qualities, I am not ready to see the last of Zoisite. That guy is the best. Please don’t lock Zoisite in a giant crystal, Sailor Moon. Please.