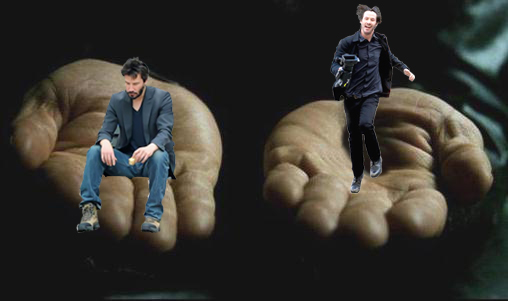 In June 2010, the Keanu Is Sad meme exploded on the internet, after Splash News photographer Ron Asadorian got a picture of the actor Keanu Reeves sitting alone on a park bench eating a sandwich. Poor Keanu looked so sad, that the  Canadian/American star of the Matrix films garnered a reputation for just being so down all the time.  In addition, he garnered a piece of internet notoriety as the Keanu Is Sad meme spread rapidly.

But Sad Keanu may not really be sad at all. Sad Keanu may actually be happy. At least, that is what Reeve’s latest project, a book called Ode To Happiness would suggest.

The book is a depiction of sad, self-pitying phrases written by Reeves including, “I draw a hot sorrow bath,” and “In my despair room.” Each of the book’s 16 pages features appropriately depressing black-ink drawing by Los Angeles based artist Alexandra Grant. But while the book seems to scream Keanu really IS sad, Reeves says that is simply not the case.

Reeves says the book was a collaborative effort between friends that resulted from an inside joke. Reeves wrote the sad statements to make a friend laugh while self-pitying, nostalgic music played in the background, and Grant jumped in on the joke illustrating the sentences as a memento. So for Reeves, the sadness is the stuff of humor, and may even serve to remind others that things can always be worse.

The book will be available in a limited edition run of 4,000 copies, and each will cost around $50. As for the irony of Sad Keanu writing a book that mocks sadness, it is merely a coincidence. The book was put together in August 2009, a full year before the sandwich eating picture and the Keanu Is Sad meme broke on the internet.

So then what’s next for the actor turned author? Reeves has shown an interest in haiku as of late, and is considering penning another book to be called Haikus of Hope. Reeves told the Guardian, “I’m gonna get deep into haiku, because oftentimes people construe that in English it’s five-seven-five syllables, but that doesn’t have to hold true, so I want to play with the traditional Basho form. I like that: Haikus of Hope.”

Reeves is also still working on acting projects. He has been shooting the samurai inspired 47 Ronin in London.