There are few cinematic villains as chilling as Nurse Mildred Ratched. In 1975’s One Flew Over the Cuckoo’s Nest (based on Ken Kesey’s novel), Ratched, played by Louise Fletcher, is a symbol of institutional power and sadistic cruelty. The film went on to win all five major Academy Awards, including a Best Actress Oscar for Fletcher. Now, Ryan Murphy and Sarah Paulson are exploring the origin story of one of film’s most iconic villains in a new series for Netflix.

The first trailer for Ratched dropped today, and boy howdy am I excited. There’s a lot to love about the trailer, but chief among them is the sheer Ryan Murphy-ness of the whole endeavor. The highly prolific producer has delivered some of the wildest television moments of the last two decades, and this trailer has that Murphy magic in spades.

I’ve often likened Murphy’s oeuvre to the world of Bill Hader’s SNL character Stefon. It’s an embarrassment of bizarre riches, filled to the brim with camp, horror, talent, style, and genuine WTF energy that manages to both thrill and delight. And while Murphy’s shows usually fall apart towards the end of the season, the ride to get there is always a trip.

So let’s look at the Murphiest moments from the Ratched trailer, shall we?

no one does period pieces like sarah paulson pic.twitter.com/9WLpw7T0nz

A Ryan Murphy period piece always features stunning wardrobe and high fashion. He especially loves the aesthetics of the 1940s and 50s, which he’s explored in Hollywood, American Horror Story: Freak Show, and AHS: Asylum (which takes place in the 1960s but also features flashbacks to those eras). The trailer delivers a variety of fabulous looks for Paulson, ad we’re excited to see what other fashion moments the series has in store.

i repeat, nobody is eating it up like ms sarah paulson. pic.twitter.com/kJNCjMk3iJ

Murphy’s shows tend to feature crackling and campy dialogue with some truly all-star insults. From Mary Cherry on Popular to Santana Lopez on Glee to Emma Roberts in basically everything, Murphy and company love a bitchy woman with withering insults. In the trailer, we see Paulson dressing down a gas station attendant and a fellow nurse. A woman who can strike fear without so much as raising her voice? Textbook Murphy.

Say what you will about Ryan Murphy’s shows, but he attracts top-tier talent. The man single-handedly keeps every actress over 40 working within his repertory theater, including all-stars like Jessica Lange, Angela Bassett, Kathy Bates, Judith Light, Bette Midler, Patti LuPone, Susan Sarandon … the list goes on. Ratched is no exception, featuring Cynthia Nixon, Sharon Stone, Judy Davis, Amanda Plummer, Sophie Okonedo, and more. And of course ….

Murphy and Sarah Paulson have worked closely together ever since the first season of American Horror Story. With Murphy, Paulson has played a witch, a reporter, conjoined twins, a ghost addict, Marcia Cross, and many more wild creations. Name a more powerful television duo, I dare you.

1. Sharon Stone with a Monkey on her Shoulder 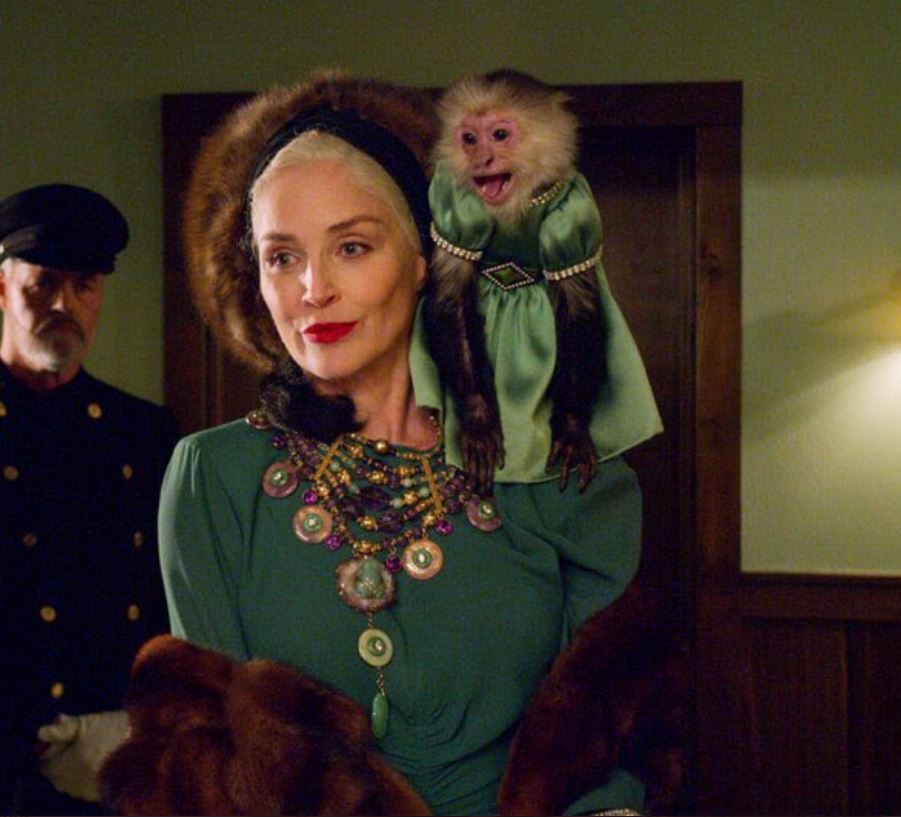 Perfect. Iconic. Camp. The last time we saw an image so breathtakingly bananas was in AHS: Freak Show when Jessica Lange carried around Jyoti Amge, the world’s smallest woman, dressed as a hot water bottle. You can’t make this shit up: that’s Ryan Murphy’s job, and we love him for it.

Ratched premieres on September 18 on Netflix.