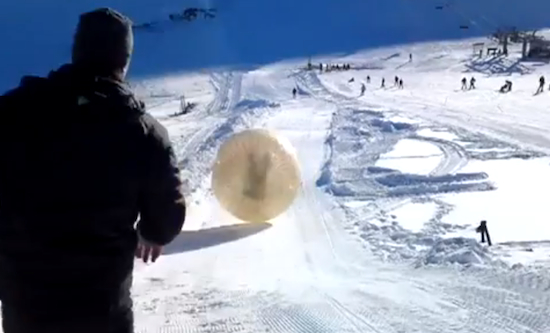 It’s one of those things you’ve seen thousands of times, but never knew there was a proper name for it. Case in point: Those oversized balls of transparent plastic you see people tumbling around in is a part of a sport known as “zorbing.” When proper precautions are taken, zorbing can actually be a lot of fun and makes rolling down a hill all the more enjoyable. As previously stated, safety measures need to be considered for the seemingly innocuous activity since the momentum of the zorb is dependent on the slope of the incline, meaning that the steeper it is, the more likely you’re going to roll away with a dangerous lack of control. Recently at Russia’s Dombai ski resort, such an oversight led to a zorb careening down the nearby mountainside, turning what was supposed to be a fun day out to one rife with tragedy.

Two men, Denis Burakov and Vladimir Shcherbakov, were inside the zorb when it started building speed and rolled away from the attendant stationed to catch it at the foot of the hill. You can clearly see where said attendant actually manages to grab onto it for a few seconds before losing their grasp and watching helplessly as the zorb rolls down the side of the mountain and off camera. It was reported that the zorb traveled for a hellish mile, finally stopping in a remote area littered with rocks. Regrettably, Denis Burakov did not survive the ordeal due to the grievous injuries he sustained during the fall.