Do you hear that noise? That's me screeching in excitement. 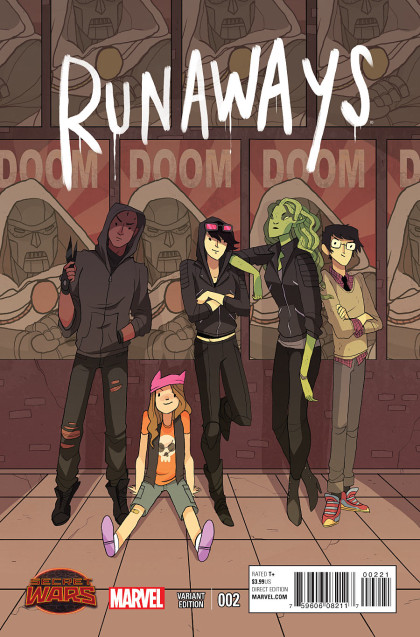 Get your excited faces ready, pals: Marvel’s Runaways is coming to (internet) television. According to a report from Deadline, Hulu has officially ordered a pilot and additional scripts based on the Brian K. Vaughan and Adrian Alphona comic. The hope is that this might lead to a larger, full-season deal. Working on the series are Josh Schwartz and Stephanie Savage, both co-creators of The CW’s Gossip Girl.

Of getting the chance to write the show, Schwartz said, “I’m a long-time fan of Runaways and couldn’t be more excited to bring Brian and Adrian’s characters to life.” Savage echoed Schwartz’s sentiment, saying, “Josh and I can’t wait to get to work for Marvel and Hulu.”

In case you aren’t aware, Runaways is a comic based on a group of teens who find out their parents are part of an evil organization. They take it upon themselves to stop their parents, all while using their unique skills and talents to stay out of trouble. Oh, and there’s a dinosaur. Yeah. A dinosaur. A “Genetically-Engineered Deinonychus,” according to Wikipedia. Her name is Old Lace. She is wonderful.

One of the best things about Runaways is that this group of teenagers is pretty gosh darn diverse. Each of the characters represent a different race, sexuality, gender identity, and every combination thereof. Seeing as how Marvel’s current crop of TV and film stars are majority-white, the addition of Runaways represents a solid boost to representation.

It’s interesting, though, that a lot of this representation is taking place on television. Between Jessica Jones, Agents of S.H.I.E.L.D., and the forth coming Luke Cage, most of Marvel’s diversity stems from their television show ventures, and not so much from their major film releases. (Note: I’m not mentioning Daredevil here because, well, what the hell was up with the villains in Season 2? But, I digress.) It would be incredibly nice to see some of these characters–or, shocker, some new ones–in movies, though I sincerely doubt that’s ever going to happen.

All that being said, I’m still super happy to see Runaways getting a chance like this. My biggest hope for the show lies in an earnest request of Schwartz and Savage: please, please, please make your writers room as diverse and inclusive as possible. There’s certainly a universality to the Runaways story, but as I said earlier, part of what made it so good was the fact that it aided representation within a universe that is so often overwhelmingly white. There’s a real opportunity here to do right by the comic, and carefully cultivating your writers room is one significant step towards achieving that goal.