So Let’s Talk About That New Character in Runaways…

[NB: This article discusses spoilers from Brian K. Vaughan and Adrian Alphona’s original Runaways run, as well as spoilers from the first episode of the new series. You’ve been warned!]

Change is inevitable in adaptation, and Hulu’s Runaways TV series has definitely expanded, tweaked, and totally transformed a lot of elements from the comics source material. There’ll be plenty to discuss over the next few days, but I wanted to started out by discussing one of the biggest changes: the addition of Amy Minoru.

In the original comics, the Pride makes a pact with the Gibborim: six-toed, six-fingered giants from the Old Testament who plan to wipe the Earth clean and make it “a peaceable utopia” once more. In order to fulfill their apocalyptic plan, the Gibborim need help from some humans – specifically, they need the Pride to get together once per year for the Rite of Blood, an annual human sacrifice.

In exchange for performing these sacrifices, the Gibborim promise to augment the powers of the six couples and grant them total dominion over Los Angeles for the next twenty-five years (the amount of time it will take to make the preparations for apocalypse). In addition, once the apocalypse arrives, the Gibborim promise to save half of the Pride from annihilation: “Six of you will be permitted to join us in our new Eden, where you will be granted eternal life. The other six shall perish with the rest of your miserable race.”

The twelve members of the Pride all agree to this bargain, figuring that a life of power followed by a 50/50 chance of eternal life is better than an average life followed by a 100% certainty of annihilation.

Then, the Steins get pregnant.

When the rest of the Pride find out, they all decide to have children of their own, too. After all, Catherine Wilder (Alex’s mom) points out: “There’s no guarantee that any of [us] will live past the Final Wave. But if we all promise to give our chance at the next world to an heir, the legacy of the entire Pride will be assured.”

However, there are only six places available, so each couple can only have “a single child.” And in the show, the Minoru family apparently has two. 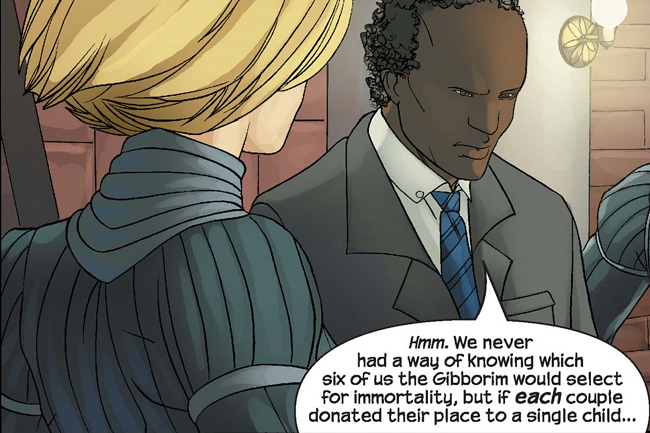 So, how do we think this is going to change things?

I feel like we at least have to analyze this in the context of Molly’s parents being dead. Is Molly still slated to take their spot? The Yorkes certainly seem loving toward her, but that doesn’t necessarily mean they’re willing to trade eternity in paradise.

And as for the Minorus, what was their plan if one of their daughters hadn’t died? Which daughter were they planning to give their spot to? Did they somehow get rid of the Hernandez couple to try and steal an extra spot for Nico?

Given how much it looks like they’ve changed, I honestly don’t know, but I wanted to make sure the many Runaways fans on TMS had a forum to speculate about this rather significant change. The only-six-spots problem may not even exist for the television Pride, given all the strange goings-on in the Church of Gibborim, but given how much has been made of Amy’s death, I have a hunch it’ll be significant down the line.

Give me your brilliant theories and thoughts in the comments!