But will Skrein be replaced by Michiel Huisman halfway through the movie? 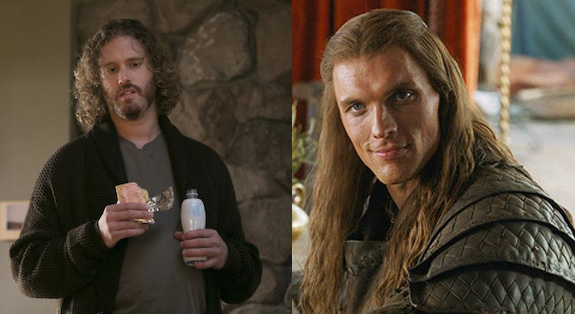 No, you haven’t been dreaming: the Deadpool movie is still happening, and now it’s even searching for a supporting cast.

According to The Wrap‘s sources, producers are now in early talks with comedian TJ Miller and Transporter: Legacy star Ed Skrein for roles in the 2016 Ryan Reynolds-helmed comic book film.

Miller has appeared as a supporting character in Transformers: Age of Extinction, Big Hero 6, How to Train Your Dragon, and on HBO’s Silicon Valley. His slacker comedy style would lend itself pretty well as a foil to Wade Wilson’s more fast-talking, quippy, fourth-wall breaking attitude.

Meanwhile, Skrein, who you might remember as Daario Naharis version 1.0, might be given the role of the movie’s villain. It’s hard to say who the villain of a Deadpool movie would actually be—he tends mostly to piss everyone off indiscriminately—but Black Swan from Gail Simone’s 2002 run might be a good place to start. Skrein looks like the kind of guy who has a pretentious German accent ready to go.

Of course, screenwriters Rhett Reese and Paul Wernick could always just make up their own enemies like the 2013 Activision game did. Personally, I’m gonna cross my fingers that they take a cue from Gerry Duggan and make him fight a bunch of dead U.S. presidents who’ve been summoned by a hillbilly necromancer. I mean, why the heck not? It’s Deadpool. It’s not going to make sense either way, and that’s why people love it.