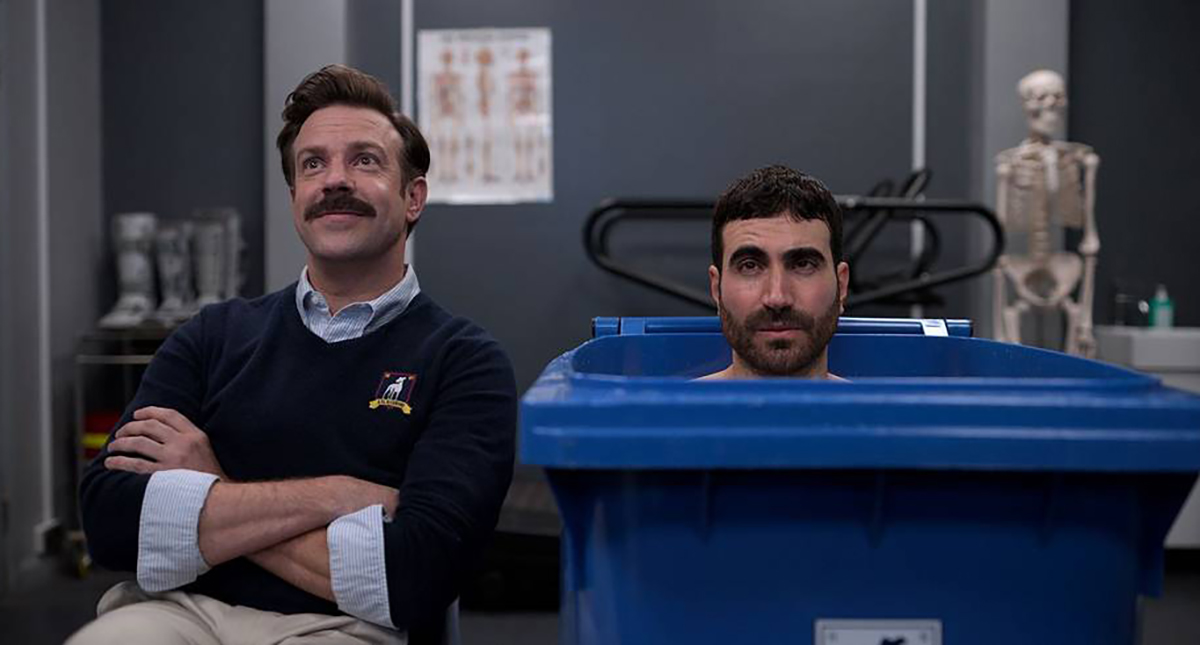 There is one show in this world that we all sort of universally love and that’s Ted Lasso. The Apple TV+ smash-hit brought us Jason Sudeikis as Ted Lasso, a happy and cheerful American football coach who was hired by Rebecca (Hannah Waddingham) to coach her English football team in hopes that he’d fail. Luckily, as we saw in season 1, Ted did no such thing and formed unmistakable bonds with each of the characters he met along the way. Now, in season 2, we’re seeing those relationships grow and change and one of the more important dynamics, to me at least, is that of Ted Lasso and Roy Kent.

In season 1, Roy was the team captain and at times, he’d fight Ted on what he was trying to do. But as the season went on, the two figured out how to communicate with each other and it hurt when Roy had to leave the team by the end of the season.

Ted Lasso brings us joy each and every week and in the fifth episode of season 2, we were confronted with a reunion that was a long time coming–and one that both Ted Lasso and Roy Kent probably needed in their lives. So let’s talk about season 2 episode 5 “Rainbow” and the absolutely brilliant work by Bill Wrubel.

From the start of season 2, I knew that Roy Kent hadn’t said goodbye to AFC Richmond. It just didn’t feel like that chapter of his life was over but he seemed to think he would never go back. I guess all he needed was some romancing from Ted Lasso to convince him to head back to his rightful place on the sidelines of the Greyhounds.

In season 2 episode 5, entitled “Rainbow”, we got a look into the dynamic between Jason Sudeikis’ Ted Lasso and Brett Goldstein’s Roy Kent and the reunion that I know I was waiting for. At the end of season 1, we knew that Roy Kent’s time as a footballer was coming to an end. He was one of the “older” players and had a bad knee so his time playing football was limited and with him leaving Richmond, it meant that Isaac McAdoo (Kola Bokinni) stepped in as captain. But when he’s struggling with the team, Ted does the only thing he can think to do: He goes to Roy Kent.

From the first episode of season 2 up until now, Roy has been on something of a journey to understand himself and who he was outside of being a footballer. He went to wine night with the yoga ladies or coached his niece’s football team but it wasn’t enough and he eventually went to be a football commentator to try and fill that void. But, in true Ted Lasso fashion, he told himself it was fine and he liked the attention but it was very clearly not what he wanted.

When Isaac needs help getting out of his head, Ted goes to Roy and asks what to do. Roy takes Isaac to where he grew up and puts him in a game with his old friends and it helps Isaac but it also gives Ted the chance to talk to Roy about coaching at Richmond. In a truly Ted move, he talks to Roy in rom-comisms.

“I’m sorry, Roy but I came here tonight cause when you realize you wanna spend the rest of your life coaching with somebody, you want the rest of your life to begin ASAP,” Ted says as Roy asks him to stop. Which, of course, doesn’t work since Ted responds with “You complete our team” and then “I’m just a coach, standing in front of a boy, asking him if-” before Roy cuts him off. (Roy did call him an asshole in the middle of all of this.)

And while it’s cute and a fun look at the dynamic between the two characters, it’s not even the best part. No, that comes from Roy Kent’s own rom-com moment with Ted later in the episode.

Roy goes back to work as a commentator and realizes while on-air that it isn’t for him, that he misses the field and the game and working with AFC Richmond. So he quits, runs out of the studio and starts running to the field. In true rom-com movie moments though, about four things delay his journey until he finally makes it onto the field and walks up to Ted, saying “Shut up. Just shut up. You had me at ‘Coach.'”

It’s all I wanted. I knew it was going to happen, I knew we’d get there eventually and that Roy wasn’t gone for good but it just feels so right seeing him standing on the field with Ted, Nate, and Coach Beard. Ted Lasso has a magical way of pulling at our heartstrings in the best possible way and I can’t wait to see what this coaching journey has in store for Ted, Nate, Beard, and of course, the love of my life, ROY KENT.