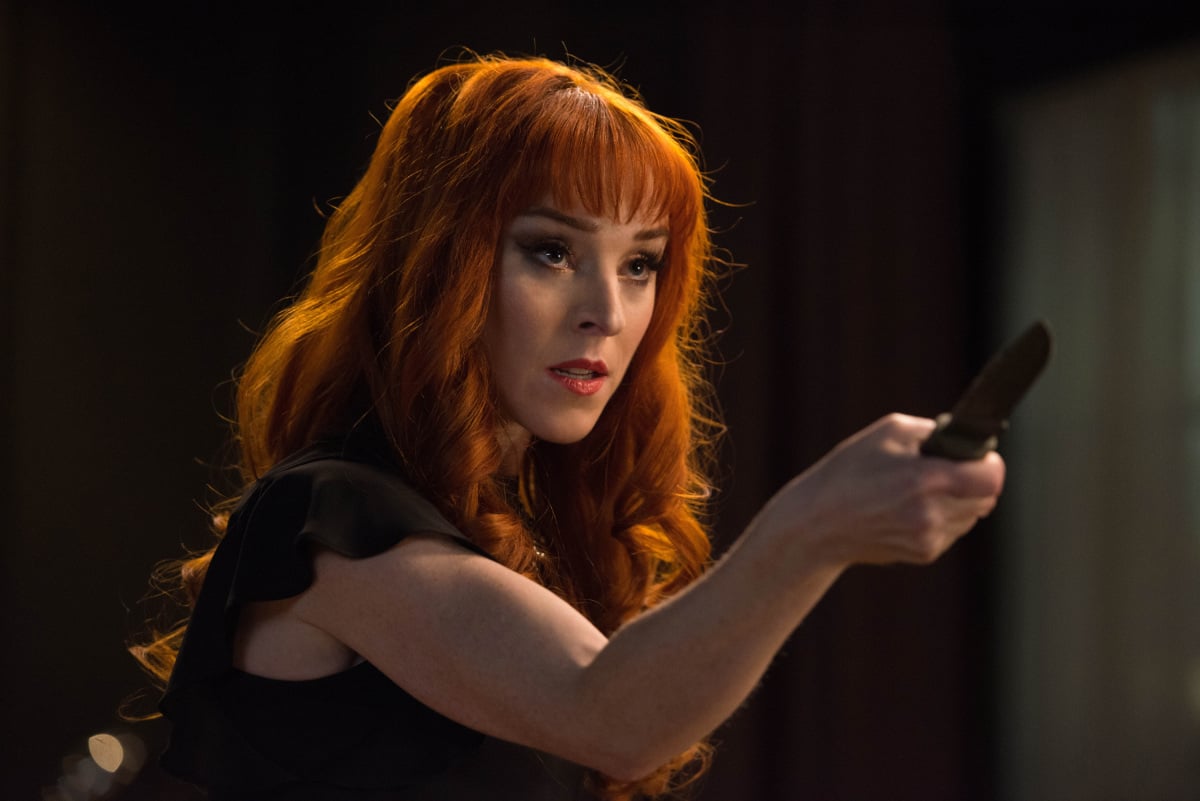 After the emotional 300th episode left us all crying through a mini hiatus, The CW’s Supernatural is back tonight with monsters, demi-gods, magic, and (probably) more terrible decisions. And what better treat for viewers than the return of our favorite ginger witch, Rowena, to help out the Winchesters (again) in their time of need?

Rowena’s portrayer, the lovely and always saucy Ruth Connell, was kind enough to talk with The Mary Sue about what Rowena’s been up to, how she feels about Lucifer’s wayward son, and how she’s found magic in her own life.

The last time we saw Rowena, back in episode seven, “Unhuman Nature,” she sadly told Sam (Jared Padalecki), Dean (Jensen Ackles), and Castiel (Misha Collins) to prepare for their semi-adopted son Jack (Alexander Calver) to die. She was right, and Jack did technically die, but since death is pretty much the same level of inconvenience as a snow day on Supernatural, Jack was up and kicking again soon after, thanks to some questionable magic that’s feeding off his soul.

In this week’s installment, entitled “Ouroboros” Connell tells us that “we find [Rowena] at the beginning of this episode being drafted in once more to help the boys.” With what? Well “they’re up against a monster who is eating human body parts,” Connell explained with a laugh because, of course, that’s just another day in the life of Sam and Dean. This monster, though, “seems to be one step ahead of where they are,” and thus, Rowena’s skills in scrying and tracking are required.

As with all things Winchester, Rowena’s involvement doesn’t quite go according to plan. “It kind of turns a corner,” Connell said, “because in working with them, she becomes aware that Jack … he seems okay, but she picks up that there’s something not quite right with him.” She goes into “Auntie Rowena” mode and “her antennae are up wondering what’s going on with jack.”

Jack and Rowena’s relationship is especially interesting, considering Rowena’s fraught relationship with her own son, Crowley (Mark Sheppard—who can also be seen back on your screen this week over on Doom Patrol). “I think it’s no accident that Rowena couldn’t love Fergus,” Connell shared, but Rowena has managed to love others since, and with Jack, “here’s another younger man that’s she’s able to mother more than she could ever mother Fergus … There’s a soft spot there for a vulnerable younger man.”

Things are slightly complicated by the fact Jack is the son of Lucifer, but no one is perfect.

While she’s been away, Connell theorizes that Rowena has continued to enjoy herself to the fullest. “She likes a good time. When she’s not helping the Winchesters,” Connell imagines Rowena “gambling, drinking her pink champagne … dating a younger man” (not hard to find when you’re 300 years old). “I reckon she’s been grifting around.”

But now she might be of use, with Dean’s vexing situation of having an archangel trapped in his head. “They ask her for help with everything, don’t they?” Connell jokes. “They never admit how much Rowena helps.” She added, “She’s very interested as to what’s happening with Michael.”

At the same time as she’s helping Dean, Rowena continues to be aware that it’s Sam Winchester who is destined to kill her. “I get the heebie jeebies every time someone mentions it!” Connell said of the promise from Death herself that Sam will be the one to end her, but she admitted that, for Rowena, there’s some comfort and relaxation in knowing “this is the person that’s going to off me; I don’t have to worry about this train hurtling towards me.”

Then again, that hasn’t work out well for others. “If you look at different stories, like MacBeth, where you think you’re being safe because you think you know what’s going to happen, but actually the thing gets you in the end that was going to but it doesn’t happen how you think it’s going to happen.” Even so, Connell says, “Rowena likes playing with fire. I don’t think it makes her necessarily run and hide from Sam.”

In her life outside of the show, playing Rowena has made Connell brave and curious as well, as she leaned into research on the real history of witchcraft and magic. “I became interested in the reasons why somebody is called a witch, where that came from,” Connell explained. “I started to do a thing called Wednesday Witch Wisdom,” sharing facts and history of witches, including the persecution of powerful women as “witches” in the past.

“Witches are more popular than they’ve ever been,” Connell went on. “I think it’s really cool. I think women are going ‘oh yeah, we are magical beings; we are spiritual beings. There is power—there is alchemy in the world.” It’s definitely affected Connell’s own view of the world and of magic: “The universe is all about intention and prayer, and to be lighting a candle as a witch is the same thing as saying a prayer … I’ve gone on a bit of a journey with it, it’s all very fascinating.”

However, she notes, “I’m very respectful; I don’t want to dabble … I don’t want to hex anyone!” Though, if she does, I’m sure her years on Supernatural have given her at least some training to deal with it.

Something else Connell has been able to do since joining the show—and becoming a fan favorite both online and at the many Supernatural conventions held through the year—is bring attention to a unique charity called My Hope Chest, which is close to her heart. “They’re a very small charity,” Connell explained, which has “over the course of the last ten years has paid for around about 50 individual women’s individual surgery and reconstruction after breast cancer,” stepping in when insurance won’t cover reconstruction.

Ruth has supported the organization for years, from selling small trinkets at conventions to larger fundraising campaigns. “It all makes a difference … A big way that I help them is just by raising awareness.” If you’d like to help, you can follow them on Facebook or Twitter.

Whether it’s casting a spell over audiences or helping cancer survivors, Connell is keeping busy and having a great time doing it, but after this week’s episode, will we see more of Rowena? “I think I can say that … there’s more Rowena to come,” Connell teased, and it sounds like what’s in store this week and beyond will be very interesting.

“I loved what [episode writer] Steve Yockey gave me in this episode,” Connell said. “I love love love what I’ve been given to do,” she stressed, noting how the story will continue to let us see the humanity in Rowena. “I’m particularly fond of what’s happening, and I think there’s more to come.”

Supernatural airs Thursdays at 8:00 pm on The CW.