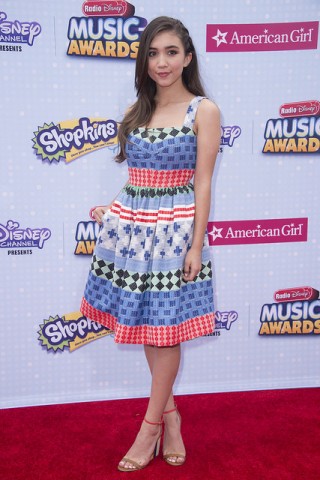 It’s awesome to see that young actors like Rowan Blanchard growing up at a time when they feel free to express their opinions about gender inequality at an early age. Blanchard is an awesome young feminist who has already been using her social media presence to talk feminism with her fans. Now, she’s being even more vocal, using her interviews to continue that conversation.

In an interview with Elle, Blanchard made some astute statements about the differences between how men and women are treated by the press:

On a red carpet, the only thing I’m often asked is, ‘Who are you wearing?’ And my co-stars, my friends who are older, even much older, really accomplished actresses who I admire—it’s the same story. For a guy, the first question is, ‘What drew you to this project?’ And it’s like, come on! I want to wear cool clothes. I love fashion. We all do. But we shouldn’t be taken less seriously because we’re in dresses.

You can be a kick a-s-s feminist—sorry, I know it’s not technically a swear but still!—but you can contribute to the fight against objectification and be wearing your favorite designer. At the end of the day, it’s about equality.

I’m happy to talk about what I’m wearing. It’s cool to spotlight a new designer on the runway, and to contribute to the fashion world that I love. It’s a very special thing I get to do. But don’t make my story, and who I am, be my dress, while my male co-star’s story is how he picks scripts and gets inspired. Why not ask me that, too? Ask me work questions, too! Ask me about my life!

And trust me, guy actors love to talk about what they’re wearing. You know what? Ask them about their hair.

It’s kind of amazing how she not only talks about how this affects women, but how men are also affected by gender inequality. With girls like Blanchard coming up in the ranks, we’ve got plenty of reason for hope. Also, it’s adorable how she tries not to swear. (She’ll get over it.)

(via E! Online; Image via Disney/ABC Television Group on Flickr)