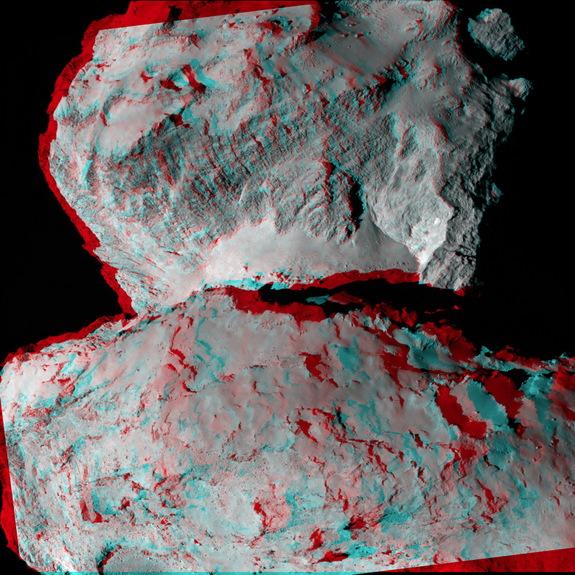 One of the most amazing aspects of Rosetta’s mission to comet 67P/Churyumov-Gerasimenko is that those of us stuck down on Earth are getting the same awesome view as the European Space Agency spacecraft herself. Now Rosetta has upped its space porn game with this 3D look at the comet, compiled from two pictures taken on August 7th when the craft was 65 miles from its destination. Just pop on a pair of 3D glasses (sadly, we don’t have any in the office right now. What good is seeing Teenage Mutant Ninja Turtles in theaters if no one steals any swag?) and, as the ESA says,

Peer over cliffs and onto the boulder-strewn ‘neck’ region, marvel at the layers in the exposed cliff face, and ponder the formation of the numerous crater-like depressions in this amazing 3D view of comet 67P/C-G.

Now that we’ve heard the ESA’s thoughts on the image, we can return to the eternal query: does 67P/Churyumov-Gerasimenko look more like Kuribo’s shoe, a big ol’ space butt, or a marshmallow peep? Discuss.

(via Space.com, image via the ESA)