Just a few hours ago, the European Space Agency’s Rosetta became the first satellite to orbit a comet! Now that she’s close enough, the spacecraft is sending back amazing, high resolution images of what the comet’s nucleus really looks like as she prepares to send her little brother, Philae, down to land on the surface.

It’s taken Rosetta 10 years, five months, and four days to finally reach comet 67P/Churyumov–Gerasimenko, which meant a long nap and a lot of, “Are we there yet?” from Philae. Here’s a full view of what 67P really looks like—sadly, it is not a giant marshmallow Peep as we previously hypothesized. 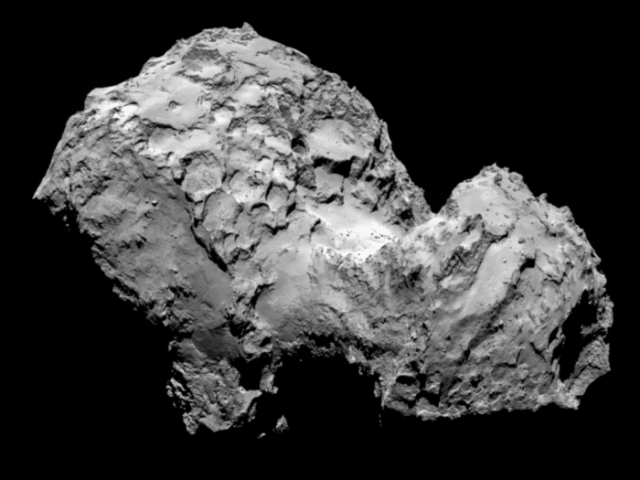 The ESA has a whole gallery of closeup shots for you to browse to get an even better view. If you weren’t awake this morning to watch it live, you can also watch a full replay of the ESA coverage of the rendezvous: Now all that’s left is for Rosetta to scout out a safe landing spot for Philae, and the adorable pair will mark another first by landing a spacecraft on the surface of a comet.

It’s a bit of a long way down @philae2014! I need to get a closer look at the comet’s surface first…

.@Philae2014 Got to find you a safe place first! I’m going to get to work right away…

(via ESA Rosetta Mission on Twitter, images via ESA/Rosetta)