Rooftop Zombie Annihilation Slingshot A Must-Have for the Apocalypse 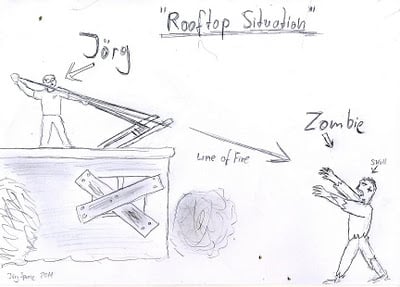 This Halloween, you are in for a special treat. Jörge Sprave, slingshot god, has put out a nifty little video where he painstakingly thinks through the advantages and tactics of using slingshots as a weapon against zombies. Granted, slingshots aren’t exactly dream weapons against the undead horde, though they certainly beat out the oft-lauded, actually awful chainsaw. Still, Jörge’s approach of getting to a roof and picking off the guys with a giant slingshot turret proves to be pretty well thought out. So long as have a rooftop and giant slingshot turret to fall back to.

The Rooftop Zombie Annihilation Sligshot (RTZAS) features an 11 foot draw-length and enough power to utterly destroy a dead head. As a plus, it has a pretty wide attack range and is extremely accurate, in the hands of a master, at least. The end result is a slingshot weapon as elegant as it is deadly. And the sound it makes? Music to my ears.

Check it out after the jump.

(via The Slingshot Channel)