We knew she drew that Mars penis on purpose. She's out of control! 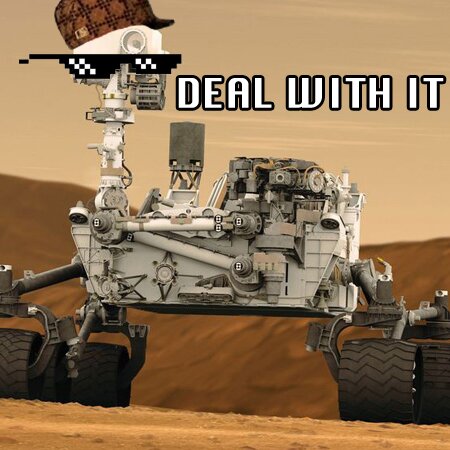 Due to the government shutdown, none of NASA’s social media accounts will be responding to tweets for the foreseeable future. Mere minutes after the official Curiosity Rover went dark, a new challenger stepped up to take its place — @RogueCuriosity. We want to be her best friend.

With a new Twitter icon modeled after your favorite Deal With It and Scumbag Steve memes (though it would technically be Scumbag Stacy, as Curiosity is referred to with female pronouns), this newly unsupervised Martian Rover is ready to do all the stuff she couldn’t get away with while working her stiff government job on the surface of Mars.

So first, this happened:

Sorry, but I won’t be tweeting/responding to replies during the government shutdown. Back as soon as possible. http://t.co/XjL1JDaotz

Basically, they’ve had me up here smelling for farts. SCREW THAT! I’m off to find a friggin’ Starbucks. (cc: @tweetsoutloud)

How hard would it be to get the Curiosity Rover a cameo in the next Fast and Furious movie? Because she’d probably be a natural, and she’s gonna need some extra income if this government shutdown thing goes on for much longer. Just sayin’.