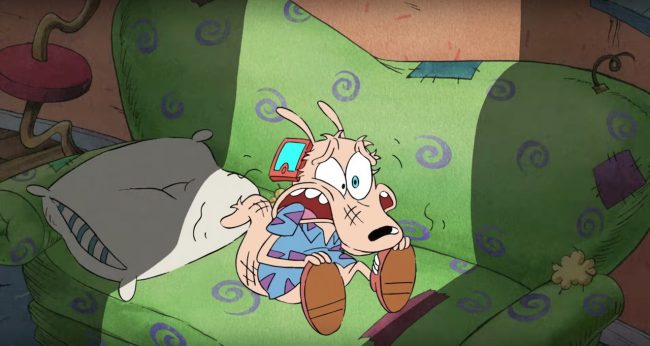 At San Diego Comic-Con, Nickelodeon premiered a pretty sizable sneak peek at the upcoming Rocko’s Modern Life: Static Cling made-for-TV movie. The movie’s said to pick right back up where the show left off, with Rocko, Heffer, and Filbert coming back from being in space. Catch is, it’s 20 years later for them (like, in real time, too), and this preview shows how each of them deals with living in a very tech-focused world.

Though Rocko seems to be having a hard time dealing with being in the future, Heffer and Filbert are super into it. According to IndieWire’s coverage of the panel, while Heffer might be excited for the future, Filbert falls for it hard. Series creator Joe Murray says Filbert “goes viral,” while Filbert’s voice actor, Mr. Lawrence, describes Filbert as “one of the sheep. He jumps right on and embraces it harder than any others.” What fascinates me about the trailer is that Beverly Bighead (a.k.a. Mrs. Bighead), Rocko’s neighbor, seems genuinely concerned for poor Rocko, who’s having one hell of a breakdown at the end of the trailer. Their relationship as friends was certainly as back-and-forth as they come, but this apparent moment of tenderness has me intrigued as it stands out against the relentlessly fast paced remainder of the preview.

Simply put: I’m so down for a Rocko-style commentary on tech in general. The preview totally doesn’t pull any punches and pokes fun at nearly every aspect of our techy future. Yes, there’s an Apple proxy, there’s a bit on processed and artificial foods, on-demand comics and the downfall of print media, a jab at the food truck and weird food combination craze, and dammit, yes, there is a small indictment of rebooted franchises. In the past, this show was obviously not afraid to poke fun at itself. It knew the importance of not taking its own message too seriously. And more than anything else, it makes me so, so glad to see that it hasn’t lost that sense of humor. I’m just maybe a little bummed that its 44-minute runtime might not be enough for me.

Of course, the panel addressed the possibility of more episodes. Murray stood up and encouraged applause from the audience when the question was posed, and said, “We haven’t talked about it. We’ll see what happens.” Man. Fingers crossed. If there’s any show that can successfully skewer this obsession with reboots, it’s Rocko’s Modern Life.

(via The Daily Dot, image: screengrab)