Does RockMelt Want to Be Facebook’s One True Browser? 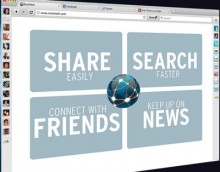 Yesterday evening, the folks at RockMelt issued a “Hello World” for the social web browser at which their team had been plugging away for two or so years, inviting people to sign up for early access.

“At RockMelt we are reinventing the browser for the way people use the Web today … We think this has changed dramatically from the way people used it just a few short years ago. But all the browsers available today, although they’ve gotten a lot faster, are still just about navigating web pages. We built features into the browser to address people’s three top browsing behaviors: interacting with friends, consume news and information, and searching.”

To this end, the browser is packed with stuff. RockMelt’s right and left sides are occupied by toolbars which contain social connections, favored websites, and social media tools (currently, only Facebook and Twitter.) It’s built using code from Chromium, the Google open-source project behind the Chrome browser, which makes it highly supportive of HTML5. You need to log in to RockMelt before you can use it — more on that later — but once you do, it pulls your custom data from the cloud, such that whatever computer you log in on, you get access to your personalized settings.

Reactions to RockMelt in this admittedly very early phase of its development have been mixed, though that mixedness is less a critique of the browser’s technical capabilities than the philosophy behind it. Critiques of RockMelt seem to emanate from two distinct camps: One group is creeped out by the hypersociality of the browser, hates its access to personal data and its requirement for a login, acknowledges that they wouldn’t use such a thing themselves, and wonders whether a large enough market exists that this could work. The second group, smaller but still vocal and influential, bemoan that RockMelt isn’t social enough, without enough integrated social media platforms, support for operating systems, and cutting-edge features.

But what if RockMelt’s in-the-middle approach to social media is the point? What if it’s aimed not towards the social media-skeptical techies (obviously not) or the Scobleian power users, or even towards hardcore Twitter users, but if it’s a browser built for Facebook addicts, of which there’s a large population already? More cunningly, what if RockMelt’s endgame is to be acquired or otherwise thoroughly integrated with Facebook, garnering quasi-official browser status and all of the power and reach that that would entail? 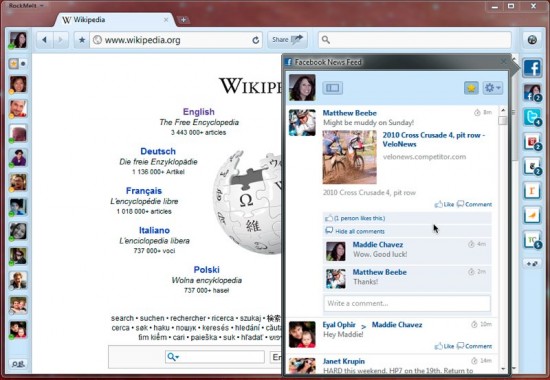 One name-dropping detail which is nevertheless relevant here is that RockMelt is being backed by Andreessen Horowitz, the venture fund run by Marc Andreessen, co-author of Mosaic and co-founder of Netscape. Andreessen also sits on Facebook’s board of directors. His backing of RockMelt has been more than just monetary — he’s been vocal in his support of the company and in his support for the idea that the world needs a new browser and that this could be it. Om Malik floated the idea that this could be an example of “outsourced development and then spin-in. Sort of like the strategy that worked wonders for Cisco.” At the very least, Andreessen could function as a liaison between RockMelt and Facebook.

As for the critiques of RockMelt from the not-social-enough contingent, one Hacker News reader writes that he or she is “disappointed” by its seeming focus on the US/UK market and its lack of a social experience intrinsic to the browser itself:

I’m a little disappointed. A truly social browser should introduce something social that is intrinsic to the browser itself, not just integrate with existing social sites.

A browser should be a basic tool that works equally well for everyone. This browser has Facebook and Twitter built in — fine for the US/UK market, but what about Europe, South America, and all over Asia, where different networks hold sway? Even if you did try to build integration for all these networks, you would forever be playing catch-up, trying to write a single application with all the features provided by 50 other application development teams. I don’t think it makes sense.

What if your browser became the new unit of social networking — like a diaspora node? That would be truly new, and truly universal, at least in potential.

All that said, this still looks interesting to me — I’m definitely part of the target demographic. I might even end up using it regularly. I was just hoping for something a little more fundamental.

And Robert Scoble writes that RockMelt can’t yet keep up with his multiplatform lifestyle or his Twitter use:

I have iPads. iPhones. Android phones. Windows Phone 7 phones. Plus Windows 7 and Macintosh-based desktop and laptop computers. Oh, and an Xbox and a Playstation and a Roku box, among other widgets and gadgets. My browsing experience spans nearly all of these, so someone who only has an answer for Windows and Macintosh is not likely to make its way into my life.

The Twitter client isn’t full featured. It doesn’t support real time, for instance, like Seesmic and Tweetdeck do. So, advanced users like me won’t find it good enough.

That is a LOT of change to ask people to do and it’s a lot to ask early adopters to overlook. Here’s why that matters:

Late adopters usually change their behavior only after getting hounded by early adopters. I’ve seen this over and over. Many marketers think they can work around the early adopters and usually that turns out to be a bad strategy. Can you think of an example of when a new product ignored the early, or advanced, adopters/users, and got major adoption at the mass market without them? I can’t and I’ve been studying this for a long time.

One possible solution to Scoble’s riddle: If RockMelt wants to be Facebook’s official browser, it could get “major adoption at the mass market” by way of promotion by a social media service with over 500 million users. With or without the intervention of Marc Andreessen, even this earliest version of RockMelt has a lot of what Facebook wants: It’s a social browser, meaning it can accomodate the needs of social media butterflies, supporting Twitter for the same reasons that TweetDeck supports Facebook, albeit better. But RockMelt’s heart is in Facebook: The coolest things its current version does, its slickest integrations are all Facebook-based. (See the video below.) If every Facebook landing page had a little nudge to download RockMelt, just as Google’s homepage nudges users to download Chrome, this could have all the momentum it needs to become a mainstream success, and even if its market share never reached the levels of the other four browsers, it wouldn’t have to: It would give Facebook a browser and a means of collecting yet more user data, and it would give the people who care about and use Facebook more than any other site a browser most suited to their needs.