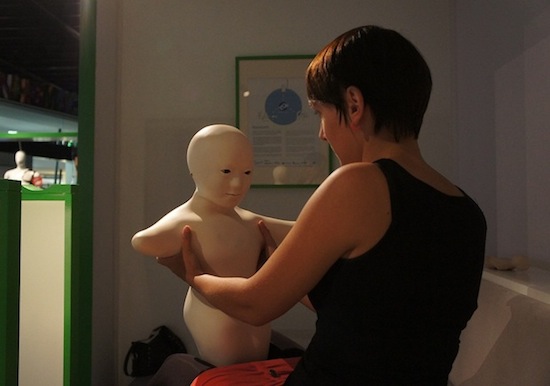 I’m a huge fan of robots, because let’s face it — robots are pretty awesome. Like many of our readers, though, I don’t necessarily trust robots. Thanks to movies like The Terminator and psychological concepts like the uncanny valley, I find it pretty difficult not to think of a robot — especially a humanoid one — as a foreign creature that will eventually try to wipe out humanity. It’s a pretty common concern. A study conducted at the Ars Electronica Museum in Austria, though, suggests a surprising way to make humanoid robots seem more friendly — by giving them a backstory. Specifically, a backstory in which they are aliens.

The museum ran an expirment in which it introduced a small Telenoid robot to visitors in one of three ways — without any backstory, with its real backstory — Telenoid is designed to make telepresence communication easier and smoother — or with the following sci-fi narrative:

As a communication robot of the new interstellar time, one of Telenoid’s main tasks is to help people from planet Earth to maintain their human relationships. If two people on Earth would like to talk to each other or sense each other despite living far from each other—maybe even on different continents—then a robot of the Telenoid species is called from Telvikos and sent to the right time and place via Chronoportation.

When they were quizzed on their attitudes toward the Telenoid robot later, visitors who got the sci-fi narrative were a third more likely to want to adopt the robot and bring it home with them. They also rated the Telenoid as more likely to be useful than other visitors. Lead researcher Martina Mara said of the research:

Our latest [unpublished] results suggest that even the famous uncanny valley could eventually be bridged by presenting a ‘scary’ robot as a story character.

You can get a look at part of the research, which will no doubt just teach robots to more effectively lie to us so they can gain access to our homes before inevitably betraying us, and was presented at the conference Human Robot Interaction 2013 here.