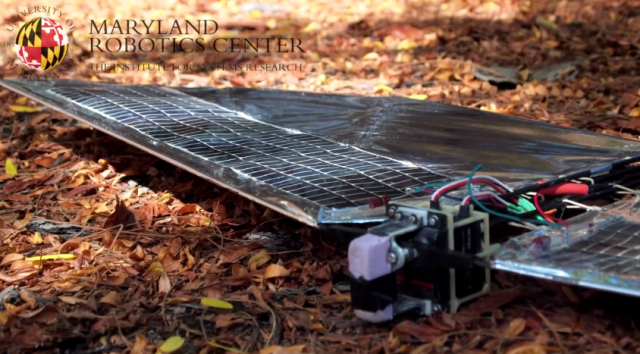 When the cities are but dust and humanity has fallen to its robot overlords, expect to see a lot of these birds surveilling us in the sky. The University of Maryland has created a new solar-powered flapping robotic micro air vehicle (MAV) that’s capable of charging its own battery. And you all were worried about drones.

According to Professors S.K. Gupta and Hugh Bruck at the Maryland Robotics Center, the bird isn’t completely ready to take to the skies on its own just yet — the flexible solar cells on its wings only produce around 3.6 Watts of energy, which can’t yet match the 30 Watt that the Robo Raven III needs to fly indefinitely. But it is able to power the robot while stationary, and the team is already hard at work creating better, more functional wings for their next model.

“We still need to make significant improvements in solar cell efficiency and battery energy density to replicate the endurance of real ravens in Robo Raven III,” Professor Gupta notes on his blog. “But the good news is that Robo Raven III has already demonstrated that we can fly with a solar cell and battery combination. Now that we’ve successfully taken this step, swapping new technologies that are more efficient should be relatively simple!”

That sounds great, right up until you watch the video and remember that oh yeah this is a terrifying robot bird:

Okay, so maybe it’s not as viscerally horrifying as the robot cheetah from Boston Dynamics — after all, galloping robot of doom beats flapping robot of doom every time. But come on. They’ve named it after a raven, which is the scariest bird ever, and they’re hard at work making it a completely independent device that could potentially fly without ever stopping.

So, Maryland readers– be extra careful when you’re out in the open air. That hawk you think you’re seeing overhead might actually be a cold, unfeeling machine. And if any of you all recently lost a family member or friend recently, you might want to ignore that rapping on your chamber door. For real. Nothing good can come from it.