SCREW THIS I'M GOING BACK TO BAG END 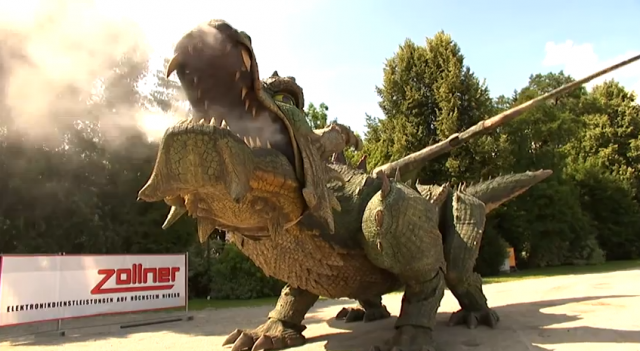 Every August for the past 500 years, German festival goers come to the Bavarian forest to see a performance of the traditional folk play Drachenstich, or “Slaying of the Dragon.” Naturally you’d expect there to be a dragon in this performance — except currently, the part is being played by an enormous animatronic robot that spits real fire.

Called Tradinno, a portmanteau of the words “Tradition” and “Innovation,” this dragon was first introduced to the festival in 2010 and has been scaring the pants off of everybody who sees it ever since. In addition to being 51 ft (4.5 meters) tall, it’s also weigh 11 tons and has a 40 foot wingspan. Oh yeah, and did we mention it breathes fire? Because it does, using liquid gas that’s stored underneath it’s polyurethane and glass-reinforced skin. There’s also 21 gallons of fake stage blood in there, too.

Tradinno isn’t the first giant dragon to grace the Drachenstich stage, but he is the first to be completely radio-controlled — prior festivals had a mechanical frame that was powered from the inside by 4 different people. As a free-standing harbinger of destruction, though, Tradinno, has been awarded the 2014 Guinness World Record for the World’s Largest Walking Robot. We’re sure that Germany’s Zollner Elektronik AG, the company that brought him to life, could not be more proud.

Haven’t wet your pants with fear and astonishment yet? There’s video of the magnificent beast.

Jesus heck, can you imagine what it’s like being an actor in that play? Because let me tell you, it’s hard enough remembering that the Muppets aren’t real creatures even when you’re watching the muppeteer performing right next to them. What’s it like having to act alongside a free-standing dragon that could probably fit you inside it’s mouth with minimal effort? Even more importantly, does the monster even have an Actor’s Equity card? Or its nearest German equivalent? Inquiring minds want to know.

(via Geekologie and NBC)