Is Riverdale's Version of Jughead Asexual, Or Not? | The Mary Sue

So, is Riverdale‘s Version of Jughead Asexual, Or Not? Cole Sprouse Is Fighting “Pretty Heavily” For It 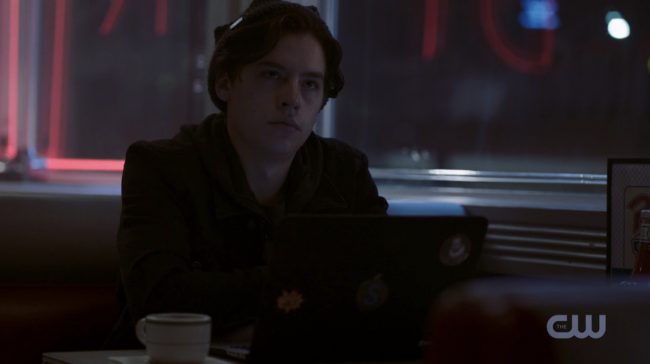 The very first episode of Riverdale just premiered last night, and if you haven’t yet had the chance to settle in and watch this gritty TV twist on Archie Comics, you can watch the pilot episode in full on The CW’s website. I’ll try to steer clear of significant spoilers in this article, but I will say that I watched the pilot and I enjoyed it–in spite of my reservations about the kiss between Betty and Veronica, which is an unusual moment that I think ended up being interesting in context.

We still don’t know what sexuality either Betty or Veronica is on the show, by the way–we only know that they’re not “romantically involved,” and that the kiss is just for fun. You’ll have to watch the pilot if you want to see how that plays out.

Sexuality is already a big theme on Riverdale, even just in the pilot episode, with Betty’s “gay best friend” Kevin playing an interesting role in the pilot that I’ll try hard not to spoil here. There’s also yet another Riverdale story about sexuality that has become a flashpoint in the press, but which hasn’t actually been addressed on the show itself yet–and that’s Jughead’s sexuality.

In the history of Archie Comics, Jughead has had would-be significant others pursuing him, but he’s never seemed particularly interested in any of them. One notable pursuant of Jughead’s affections is Ethel Muggs, who will be played by Shannon Purser on Riverdale, although we haven’t seen her character appear on the show yet. Even though she hasn’t yet shown up, the very idea of her existence is not sitting right with Jughead fans, particularly those who see Jughead as an asexual character.

There’s canonical precedent for Jughead to identify as asexual, too–this isn’t just a “fan theory,” at least not anymore. In Chip Zdarsky and Erica Henderson’s Archie comics, they did an issue in which Jughead and Archie discuss in passing the fact that Jughead is asexual, as though it’s a given. This aspect of Jughead’s character hasn’t appeared in any other Archie Comics series other than the Zdarsky-verse, but it’s also known that Riverdale takes a lot of its inspiration from Chip Zdarsky’s versions of the characters. Because of that, fans had assumed that this version of Jughead would be proudly asexual as well.

However, this version of Jughead is not proudly asexual. In fact, it’s not yet clear whether he’s asexual at all. All we know so far is that, in season one, there’s going to be some sort of romance plot set-up for Jughead. I’m going to guess it’ll involve Ethel, given the comic book history there. Understandably, fans have reacted with concern about this narrative choice, and even Cole Sprouse–the actor who plays Jughead–isn’t in favor of the storyline. He told Nerdist,

“I personally would love to see that exploration [of Jughead as asexual]. But I’m just the actor. At the end of the day, to say that’s my job or my duty is probably a misunderstanding of the writers’ role and the directors’ role and the producers’ role. If I was in full creative charge of this character, things obviously would be different, things obviously would go a certain way. But it seems to me that they’re not going to explore that angle and, to me, that’s unfortunate, to be quite honest.”

He went on to say, “I think there’s a lot of room for growth in that and I think that kind of representation is quite interesting and I think it’s needed, frankly. But this is also one of those things where it’s only really been canon in a single iteration of the Archie universe and that’s the Zdarksy universe… So it’s not in the digest, it’s not in any of the previous ones and now it’s become kind of the lynchpin of his character. I also don’t know if that’s right, specifically, but I don’t have that kind of control as an actor, to be quite honest.”

Specifically, we know from Nerdist that Jughead “will have romances with women.” But, Sprouse doesn’t know if that’s the endgame for the character, and it sounds like he’s hoping it won’t be: “I know that Jughead’s story right now has not fully been explored, especially in terms of sexuality and his placement in the world. Because he as a character is so, so lost just amongst himself and amongst his relations with everyone around him, I think there’s a lot of growth available there and there’s a lot of narrative that can be explored.”

Many fans have taken these quotes as a firm “no” when it comes to asexual representation. Call me an optimist, but I think it sounds like there’s room here for a coming-out story for Jughead. That might not be as empowering of a story as it would be if Jughead were already aware and proud of his identity, but given that he’s only 15 years old on Riverdale, and given that the rest of his pals on Riverdale are around his age and also struggling with their identities, it doesn’t seem out of the question for a teen show like this to prefer to explore a coming-out story rather than a story about a character who already feels settled in his identity.

Recently, MTV News reported that Sprouse had fought “pretty heavily” for Jughead to be asexual on the show, so even though he says he doesn’t have a lot of power as an actor, it sounds like he’s using as much leverage as he possibly can. What’s more, showrunner Roberto Aguirre-Sacasa acknowledged that he had discussed the issue with Cole Sprouse, and said the following on the topic:

“Cole and I have talked about it a ton. The way we’re treating Riverdale, especially Season 1, is it’s an origin story. So I think all of the kids are discovering themselves, and a big part of that is discovering their sexuality, their sexual selves. Rather than have everything fully formed — for instance, we’re not going to start with Archie’s band or Jughead’s asexuality or any of the things that have become canon — those are all stops on the way to the journey until the show catches up to 75 years of Archie history.”

I understand that this is a disappointment for the viewers who see any relationship that Jughead might have on the show as a form of asexual erasure. However, I also think that based on these quotes, it again sounds very likely to me that we could end up with a coming-out story for Jughead in the future. Given the long history of Ethel’s infatuation with Jughead, and Jughead’s disinterest in her, I think it’s likely that the “romances with women” we’ve heard about won’t necessarily be the same types of depictions as the other steamy teen romances on the show.

All that said, I definitely don’t think this show is perfect when it comes to depictions of diverse sexualities, even just in the pilot episode. I’ve already cited my own discomfort with the use of a girl-on-girl kiss for shock value in the marketing of the show. Even though the moment works in context, the use of the kiss in marketing didn’t sit well with me, and I’d also really prefer to see queer women characters on this show as opposed to presumed-straight girls kissing for fun. I think the moment did potentially work as an example of 15-year-olds figuring out their identities–and that’s also the same type of storyline that we see happening with Kevin and his hook-up, which again I don’t want to spoil for anyone who hasn’t seen the show yet. This show is not exactly the pinnacle of queer representation so far, but that isn’t what I expected from it; I went in with very low expectations for this show, and Riverdale exceeded those expectations for me.

Although the actors on this show are a lot older than 15 years old, they’re supposed to be playing very young characters who don’t yet know everything about themselves and are still exploring. They’re facing peer pressure to be “normal”–definitely experiences that I felt at the age of 15, and which I frankly still feel now at age 30. So, to me, the idea of having stories about closeted characters doesn’t necessarily seem like a bad thing. Kevin’s storyline, for example, involves him interacting with another character who is closeted, and I expect that storyline to continue in future. I also hope that eventually, we’ll see a much more confident version of Jughead who knows who he is and doesn’t care who knows about it.

Furthermore, I think it’s also worth highlighting the differences between “asexual” and “aromantic” as identities. Although I’m neither myself, I do know that it’s something that’s important to differentiate, and it’s not something that we yet know about Jughead–since no writer has specified whether he is aromantic in addition to being asexual. In Zdarksy’s run, we know Jughead identifies as asexual specifically, but that doesn’t necessarily mean that he wouldn’t want to be in a relationship with someone–although, again, all signs point to “no” on that. But, it’s still worth pointing that out anyway.

We’ve only had one episode of Riverdale so far, and since I enjoyed it, I continue to be cautiously optimistic about the future of the show. I’m also very heartened to hear that Cole Sprouse is fighting for Jughead to be an asexual character, and I think that if the fans continue to ask for that, then that will help too. This is one of those times when a fan outcry can really make a difference!