Betty and Veronica Kiss in a Riverdale Teaser | The Mary Sue

Betty and Veronica, in a Riverdale Teaser, K-I-S-S-I-N-G!

There’s a brand new Riverdale teaser out today, titled “Moment.” I’ve taken this opportunity to rewatch all five of the teaser-trailers that we’ve gotten so far for this show, all of which are available on the CW’s YouTube playlist, which I’ve embedded up top. Go enjoy all of ’em, and then let’s dish about this freakin’ weird grim-dark Archie Comics series!

Above all: let’s talk about that one moment in the “Stranger” Riverdale teaser. You know the one… 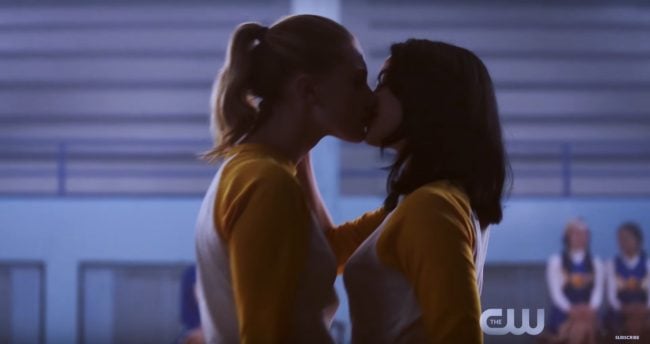 They don’t call them “teasers” for nothing, huh? So, what’s the deal with this blink-and-you’ll-miss-it shot? Are Betty and Veronica getting together in Riverdale???

By all reports: nope. Lili Reinhart, who plays Betty Cooper on Riverdale, shot down the idea right away when asked about the kiss, saying:

“There’s a group that very, very much wants it. It’s just in our show, they’re not romantically involved… They’re soulmates in a friends’ way. Our show is not meant to be fan fiction. We give them a taste of it when they kiss, but that’s all it is. People love Beronica and they want to see them together, but that’s just not our show.”

Hmm. I admit I felt a bit stung when I read the actress saying that she considered the idea of a queer romance between Betty and Veronica as solely the realm of “fan fiction,” since that suggests that it’s something that would never happen in any Archie canon. Everything else about this show is clearly an alt-universe in which characters do tons of stuff that’s not canonically part of Archie, so the “fan fiction” comment doesn’t even seem fair in context. Plus, Archie Comics has always been weird and all about exploring alt-universes and what-if scenarios! Archie already is fan-fiction of itself, most of the time. That’s what’s fun about it, and what’s why I was pumped about the whole idea of Riverdale in the first place!

So, Lili Reinhart’s statement here might not have been worded in the best way. As a result of that, I’m left with more questions, namely: who is this show for?? When I see a girl-on-girl kiss, and I hear that it isn’t part of an actual romance, I worry that the kiss will be positioned as being “for” straight male viewers to enjoy. However, nothing else about that show gives me that vibe.

The very first teaser for the show compared it directly to The Vampire Diaries and to Gossip Girl, flashing both of those show titles on the screen before launching into the Riverdale stuff. Given the massive female fandom for Archie Comics, as well as the lady-dominated fandoms for Vampire Diaries and Gossip Girl, and also given the fact that KJ Apa (who plays Archie) is shirtless in almost all of these trailers, I think it’s pretty clear that this show is for those of us who are attracted to men.

On that topic, KJ Apa’s washboard abs serve as an explanation for the age-old question of why soooo many girls are falling over themselves to date Archie. At least now Riverdale is offering us an explanation, of sorts. Because, seriously, that never made sense.

Anyway, Riverdale‘s creators have to know that there are a lot of queer women fans of Archie as well, right? Including a kiss as a “shocker” moment between two women who are friends has a high potential to go wrong. Since there apparently isn’t a planned romance between these characters, I’m very confused as to why a kiss appears in the first episode at all, and I’m curious… but also worried… about how it’s going to play out in the story.

I guess that’s just one more mystery that we’ll have to wait and discover more about once Riverdale airs its first episode on January 26th!

(via Coming Soon, image via screencap)