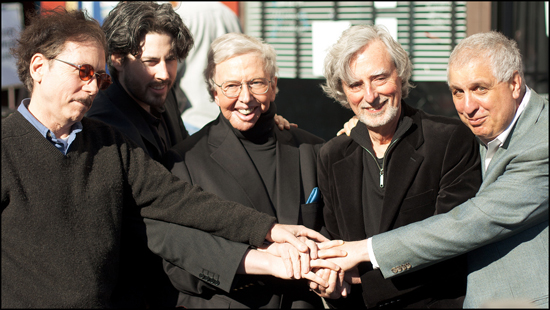 The man might have had some misguided notions about what is and is not art — as evidenced by his personal crusade against video games — but there’s no denying the profound influence Roger Ebert (third from left) had on the world of movies as well as that of film criticism. So it is with heavy hearts that we relay this news: Roger Ebert is dead after a long and public feud with cancer.

Here’s the important bit from the Chicago Sun-Times, where Ebert reviewed movies for almost five decades:

Ebert, 70, who reviewed movies for the Chicago Sun-Times for 46 years and on TV for 31 years, and who was without question the nation’s most prominent and influential film critic, died Thursday in Chicago. He had been in poor health over the past decade, battling cancers of the thyroid and salivary gland.

This comes just two days after Ebert announced he’d be taking what he called “a leave of presence.” Basically, his health had deteriorated to the point where it was difficult to continue on even in his modified fashion, so he’d be leaving most tasks to others, but he still wanted to review movies of his choice.

Unfortunately, it appears he won’t get the chance.