DailyBooth Shutting Down, Gone by End of Year | The Mary Sue

So Long, and Thanks for All the Pics: DailyBooth Shutting Down, Gone by End of Year 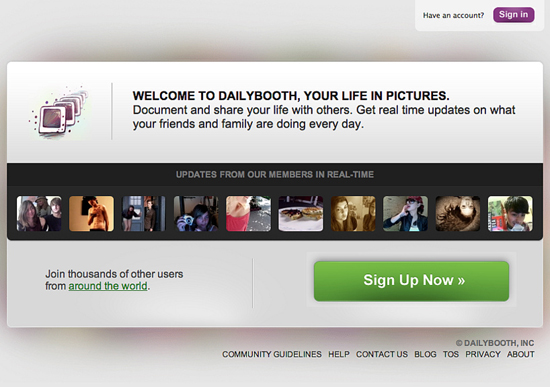 It was bound to happen sooner or later. The sharing of photos is something that happens in a million different places across the web, and DailyBooth had long since ceased to be relevant. The kids these days use Instagram, and whatever platform it is that’ll eventually kill Instagram is surely coming if not already arrived. DailyBooth’s time is up, though, and the service will stop allowing new content to be uploaded on November 14th. If folks don’t grab their stuff by the end of the year, it’ll be gone for good.

An email went out last night confirming the shutdown to users, but it was initially questioned. Seeing as it was addressed to *|USERNAME|*, some folks thought it was a hoax. It’s more likely just an error in importing usernames on DailyBooth’s end, as The Next Web has confirmed that DailyBooth is, in fact, shutting down.

The email itself doesn’t try to give any concrete reason for the shutdown. It includes only a single sentence on the matter: “Keeping the website running is no longer feasible.” Ouch. Another possible way of reading that is, “we’ve been bleeding money and can bleed no more.” It’s an admission of defeat.

For anyone that still has content over on DailyBooth, it can be exported (via this link) until December 31st. After that, it’s gone.

(via The Next Web, image via Chris Messina)