And they did it using the pizza-loving stylings of William T. Riker. I have to love it. 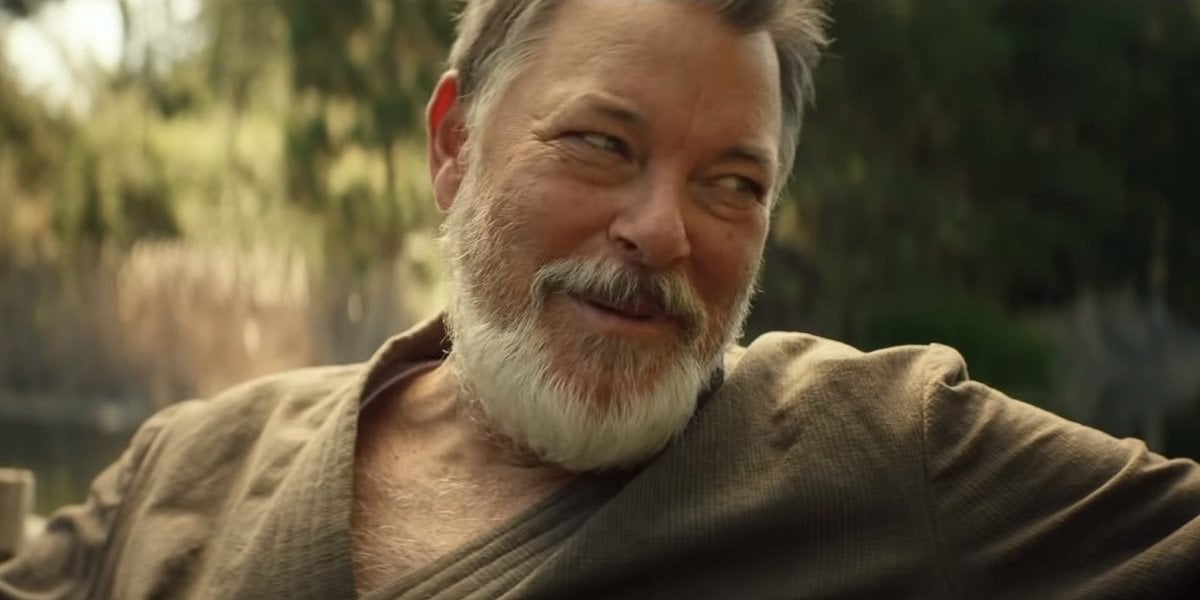 Star Trek did what Trek always does and used its platform to help bring us one step closer to that society Gene Roddenberry had hope for—one without racism or sexism, one where we could learn to exist as one. To help the Black Lives Matter movement, CBS All Access used “Picard Day” to raise money for BLM, give back to local establishments, and help in whatever way they could. (Yes, I’m crying.)

In doing so, they used a fun marketing strategy: Riker and pizza! I have learned in my 28 years that William T. Riker being my favorite Star Trek character seems to be very fitting? Whatever, Riker rules, but in learning that fact, I have now become aware that I like to yell about the latest development in the life of Riker at any given moment. When Star Trek: Picard brought Jonathan Frakes back into my life, they gave him a nice cabin in the woods and a lovely little family. What can I say? I love a good dad.

That being said, Star Trek helped give back by celebrating Picard Day with pizza from Riker himself, and me? I did not get any!!!!! (I want some fun pizza from Riker!!!) Picard Day has been a time-honored tradition since 2007, when fans realized that Stardate 47457.1 is, roughly, June 16th. (Even though Picard’s birthday is July 13th. Happy birthday, mom and Harrison Ford!)

This Picard Day was used to help benefit the NAACP Legal Defense Fund and the Black Lives Matter movement in the best possible way. Reaching out to local pizza places through DoorDash, CBS All Access focused their energy on helping local businesses and had the pizza give fans that wonderful Trek flare that we know and love.

Thank you ⁦@CBSAllAccess⁩ for the pizza. They are celebrating #PicardDay tomorrow by supporting local businesses (hence the pizza) and making donations to the #NAACPLegalDefenseFund and #BLM. I am so proud to be part of this corporation. More details tomorrow. pic.twitter.com/QZMJDWOutc

This is, honestly, a great way for a company to support the BLM movement, as well as honoring Gene Roddenberry in the process. Right now, so many companies are making blanket statements or just donating to one organization (which is better than nothing), but supporting local businesses in the process of also donating in the name of Star Trek is a reminder of the beauty that Trek always has been.

And if you get to share Riker just loving his pizza oven, what a fun way to celebrate Picard, Star Trek, and help one another in the way that Trek and Roddenberry taught us.

The following day, in the name of Star Trek, every tweet that featured #StarTrekUnited earned a dollar on behalf of the #BlackLivesMatter movement.

Join us today for #StarTrekUnited as we help raise money for charities supporting the Black Lives Matter movement.

Be sure to tweet #StarTrekUnitedGives and @CBSALLACCESS will make a $1 donation on your behalf 🖖 https://t.co/cifrpmeRVX

For every person who tweets #StarTrekUnitedGives today, $1 will be donated to support the Black Lives Matter movement.

…and the day after Picard Day? I’m sure the Captain would approve. pic.twitter.com/ee4wMc1At7

“I hope by sharing it with you, it will help you believe that we can live a future like that.” @jonathansfrakes recounts a memory of meeting with Gene Roddenberry while auditioning for the role of Riker. #StarTrekUnited pic.twitter.com/wMe94ir1D3

There were also some fun tweets just honoring Jean-Luc Picard and his brilliance on #PicardDay.

What are your favourite memories of the man himself? pic.twitter.com/7XJePe5JCp

So happy belated Picard Day to all. I love you, Jean-Luc, but I am very upset that I did not receive William T. Riker pizza, as someone who will gladly yell about cabin dad Riker for the rest of my days. And good on Star Trek for continuing to honor the legacy of the show and Gene Roddenberry. There’s a reason Trek has continued to be a beacon of hope for fans across the world, and using its name and platform to help the Black Lives Matter movement makes me proud to be a Trekkie.